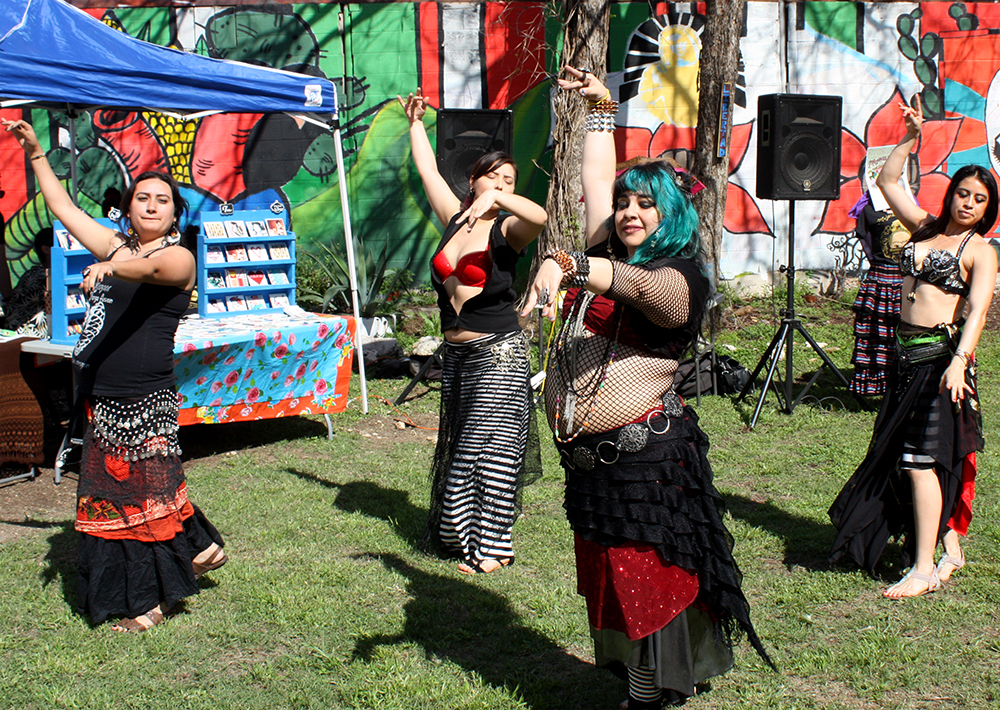 “When people hear belly dance, they have one picture in mind, but we’re doing something different.”

Queer-based dance troupe Zombie Bazaar was founded in 2008 by Giomara Bazaldua and Cristal Munoz, who met in a dance class and found they shared a desire to pursue a less-conventional path.

“I had danced before, so I had always wanted to tell stories through dance,” Bazaldua says. “I saw tribal fusion and it felt more conducive to doing that. Then I met Cristal and we had a good time dancing together.” When their instructor moved to California, they started Zombie Bazaar.

Now 12 ladies deep, the Zombies dance “panza fusion,” a style that blends tribal belly dance with genres including ballet folklórico and modern dance. While Bazaldua has had extensive training in dance, the group as a whole reflects a range of experience.

Diana Lopez was introduced to Zombie Bazaar three years ago at the Southwest Workers Union. “I’ve always loved music, but never done dance performance,” Lopez says. “When people hear belly dance, they have one picture in mind, but we’re doing something different.”

The Zombies combat those misinterpretations not through words, but through their art. “We just go and dance. We don’t introduce ourselves, we just dance,” Bazaldua says. “The dance, songs, and the movements we do speak for themselves.”

The Southwest Workers Union practice space has been instrumental to the company’s growth. “They take a big part in getting us out there,” Lopez says, and the relationship also reflects the group’s values. “We’re social-justice based and very interested in issues like race and class,” Lopez says. “There’s no other troupe that brings those ideas and challenges forward.”

The ladies address those issues through process as well as performance. “It’s about reusing material for costumes. It’s about artistically creating your base, rather than buying a creation,” Lopez says. The purpose that’s reflected in those details is what being a Zombie is all about.

But pursuing that purpose wasn’t always easy. “Life happens,” Bazaldua says. Zombie Bazaar has undergone much transformation since its inception. Members have tried other dance groups, performed in bands (Munoz is part of Heather Go Psycho,) attended out-of-town workshops, and produced solo acts, but the individual experiences result in a collective push forward. “We just didn’t have a voice yet,” Bazaldua says. “And I think it’s nicer when you have people to feed off of.”

“We have this language that forms between us, it’s something you can’t get by sitting and talking,” she adds. “It’s something that you learn when you get up and move with someone, when you get close to them and you have to break this barrier that we all have.”

How LGBT-friendly is the visiting Namibian president?