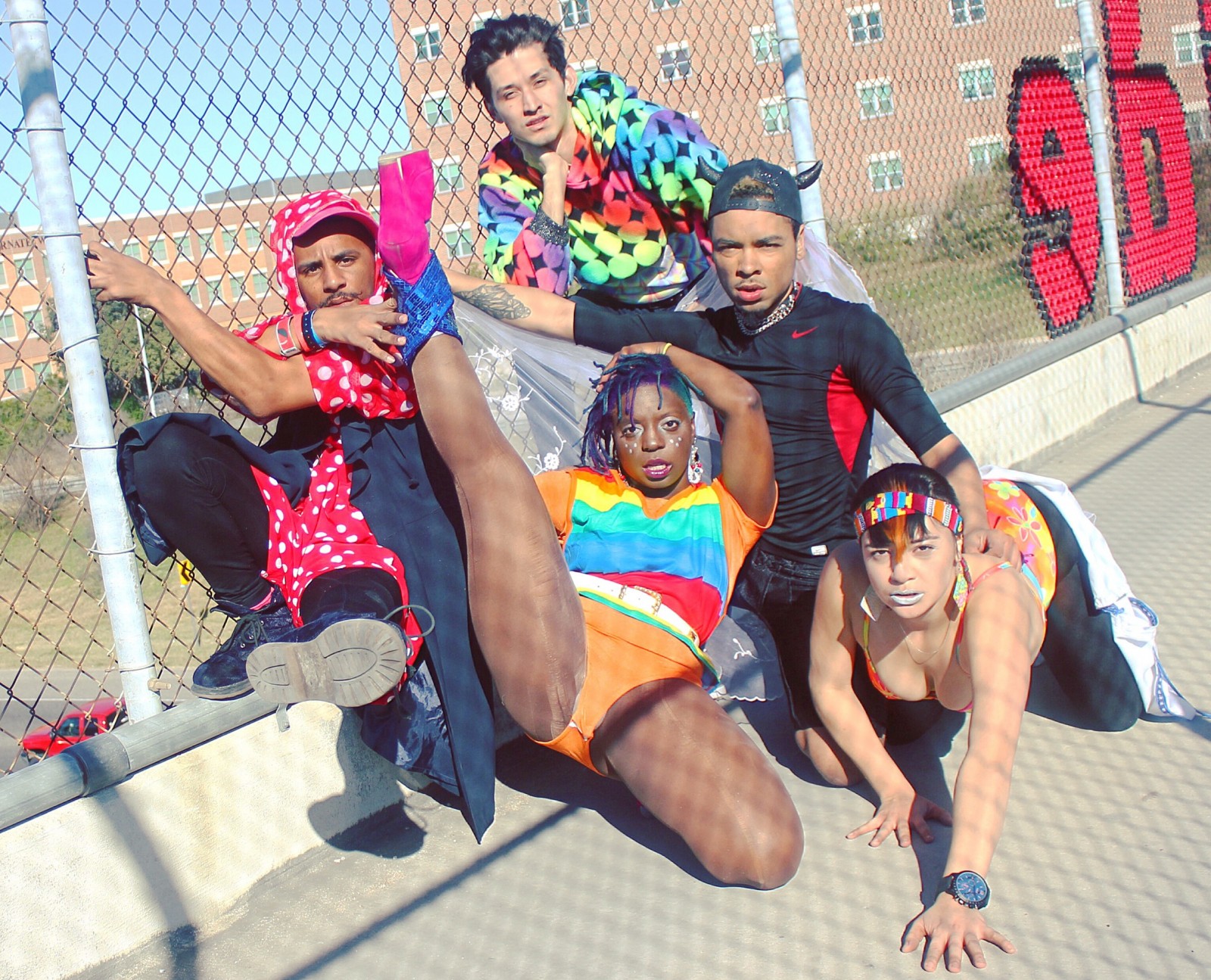 House of Kenzo photographed by Wayne Holtz for Out In SA

I meet House of Kenzo (HOK) on the University of the Incarnate Word Sky Bridge, a phobia-tweaking pedestrian catwalk over the zooming traffic on Highway 281. It’s a sunny afternoon, and House of Kenzo are mid-photo shoot. They are beautiful, self-assured, gender-flouting, working their rainbow fashion gear into wind-whipped battle flags visible for a half-mile. Motorists on the freeway honk as they pass. The photographer, Wayne Holtz, is tall, calm and elegant, and exudes focus and patience, while HOK artists flatten themselves against the chain-link enclosure with the skyline in the background, or pose propped up or crouching, hands expressive, limbs outstretched then locking, ready to spring.

Bobby, Tony, Breezy, Gemel, Roxy and Wayne are psychonauts in the rapidly evolving movement of contemporary vogueing, which is only one pillar of their house. They are all dancers, designers, musicians, choreographers and multimedia artists. All are young. None are white. They are digital natives whose Instagram accounts are fucked-up and glorious — sly portraiture, subversive fashion and messages of love, work and defiance. Where did you first encounter vogue? Maybe via Madonna’s 1990 mega-hit single and video, in which she appropriates black, brown and queer bodies in strike-a-pose fierceness. Or perhaps from Paris Is Burning (also released in 1990), the documentary by Jennie Livingston that chronicles the traditions and factions of house balls in Harlem, a ritual of underground LGBT black excellence that dates back to the 1930s. If you’re the age of the HOK collective, though, maybe you first caught vogue as a digital movement, via shared YouTube videos and Instagram shout-outs, and you absorbed the cultural legacy in this context. Also: “The House of Kenzo is a family of excellence with stock in peace, love, unity, respect, presence, integrity and professionalism.” HOK is not just a dance troupe — it’s an ethos.

I reconnoiter with them at some shaded picnic tables once the photo shoot is over. They talk in tandem, punctuate their anecdotes with dips and duck-walking. My interview notes catch their enthusiasm and are infected with rapid-fire non-sequiturs, exclamation points and the word “girl.” And while they’re conceptually broad-ranging and socially open, they’re wary of conventional identity politics and don’t categorize themselves or each other based on sexual practice or gender norms. They notify me: “We’re all sisters.” Roxy and Breezy, the biologically female representatives of HOK, have been taken for trans women, which is fine by them. Proudly and purely San Antonio, House of Kenzo has no problem with the Alamo City’s status as a “city on the rise.” They’re rising, too — infiltrating New York Fashion Week with their NYC-based founding father Karma, who strode the runway and performed at a Fader after party. They invaded Art Basel in Miami, where they were photographed by veteran party paparazzo Mark “The Cobrasnake” Hunter. They’ve collaborated with local queer musicians Alyson Alonzo and Chris Conde (aka “Ghetto Prom”) in their buzzy, witty video for “Get It.” They’ve dropped a dizzying single called “Conscious Cunt.” And, at the time of this writing, HOK was gearing up for a featured showcase at South by Southwest.

You’re putting San Antonio on the map, I say. No, they reply. San Antonio is the map. The source — the wormhole, the launch pad, the hometown, the hashtag. House of Kenzo “mobs deep,” as they say. The group interview turns up not only their philosophy, aesthetic and banter, but frequent enthusiastic references to other vogue houses, fashion designers, choreographers, DJs, drag artists and filmmakers here and everywhere — a networked community of international cunthood, online and, increasingly, IRL. They plan to travel to Japan next summer to participate in underground arts culture there, and to pay homage to their namesake: fashion designer Kenzo Takada. This summer, they’ll travel to Chicago to collaborate with Deeply Rooted Dance Theater.

Money is a challenge. They’re getting paid better and better for their art gigs, but, as Wayne points out on Instagram, “day hustle is mandatory.” Teaching dance, tending bar, rolling out the hours speaking to randos in a call center. But they want to build a house — an actual house — with a project space atelier. They’d love to have a van, à la the Scooby Doo crew. God knows they’re working. (And they’re mindful of low-income parameters for other artists too. For Breezy’s class at the now-defunct Uptown Studio, Hip Heels Hop, she charged attendees only $7.)

Another of HOK’s catchphrases: “We are not gone let you be stupid forever.” Central to their art practice is constant self-improvement, whether in challenging norms, sit-ups, proper hydration or healthy eating. Nutrition is part of the equation. One term is “health goth,” with plant life as a metaphor for personal growth. They’ve chopped performers for such offenses as being late, not being full-out, insufficient input and not being conceptual. They admonish their followers: Get woke, stay woke. Question everything. Meditate. Realize your own agency. Smoothies. Stretching.

Finally, I ask the members of House of Kenzo to describe each other. Here is what they said (with some tweaks by me). Note the Instagram handles. That’s where they tell their own stories. This is only a primer. Get to know them.

Left-brained, deadline-oriented, a natural checker-upper, almost motherly. A fluid, verbal thought leader, she speaks in manifestos. Nothing if not cuntceptual. Philosophical, assertive, sexy and abstract.

Comes from a rigorous background training in cheerleading and gymnastics. He remarked that since there was no gymnastics in high school, he switched to cross-country. Authoritative, commanding, insists he “reads people, but in a positive way.” He dances with force, and with quick-hitting grace notes.

Transferred out of Juilliard to recover from the all-too-common body-abuse culture of classical dance. At one point, this club athlete weighed less than 100 pounds. “Expressive AF,” she reclaimed a body she describes as “African-American essential.” Her promo flyers for her classes are genius. Any photograph of her is a good photograph.

Trained and seasoned as a house musician, engineer and DJ, but has taken on dance, not as an adjunct practice, but with physical exuberance. “I became better in both,” he says. “I know what a dancer needs.”

Doing, fixing, thinking. A very gifted freelance photographer and founder of his own house/atelier: Haus of Holtz. He was, I am told, the glue in HOK’s recent chaotic New York adventure. By way of demonstrating his deep empathy, his comrades tell me a story of vogueing in a subway car. A young child confined to a wheelchair responded to their movement, waving her arms and smiling. Her mother was astonished, and told them she rarely expressed herself in this joyous way. This hit Wayne hard. “She is the movement,” he said.