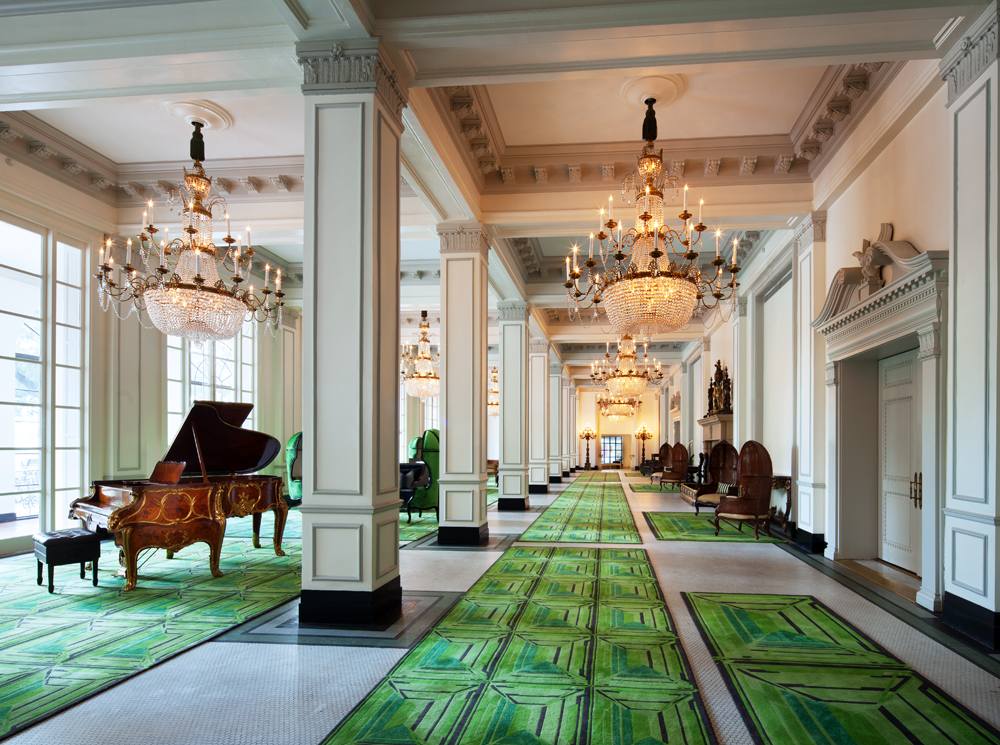 Even without the excuse of an event or a staycation, a visit to the new-and-improved St. Anthony Hotel Is a must. (It should be noted that Travis Park, the hotel’s front yard, has also been spiffied up.) Okay, there’s a tad too much mausoleum marble for my taste — so cool, so slick — and the Peacock Alley Orientals of yore have largely been replaced by some very odd emerald-inspired runners. But the tone is relieved by familiar pieces such as the grand old rosewood Steinway (itself refurbished), there are flashes of gold leaf, some over-the-top light fixtures, a brace of high-style settees. Into this environment steps Feast’s Andrew Goodman with his radical redos of Pete’s Pub and the former lunching-ladies’ Madrid Room. It’s a match made in heaven. First came Haunt. The bar, which replaces a staid and paneled space nobody ever thought to visit, was the initial salvo fired in a campaign designed to revitalize a dining and drinking program that had long languished in neglect and indifference. No stranger to over-the-top himself, Goodman has imbued Haunt with his signature, quirky-modern style. Think deeply tufted and shiny-black cube chairs perched on tiny, Lucite peg legs; imagine zebra-print lounge chairs slung in swooping chrome frames; feast your eyes on acres of button-tufting punctuating low-hung sofas in white, leather-like material; pay special attention to serving tables held aloft on cast-metal bird’s legs … and put all this in a charcoal-lined cocoon of a space that is now far more open to the street than before, giving the imbiber a unique perspective: a feeling of being cosseted in a special environment that contrasts dramatically with views of San Antonio’s equally special street life. Those LED-limned Cinderella carriages clopping by are especially ironic in this context. We only wish that the large mural depicting a trail drive, about the only element remaining from the hotel’s historic past as a “stockman’s headquarters,” had been given equal billing with the street. The name Haunt, by the way, is apparently a reference to the St. Anthony’s spooky reputation. The 10th floor is said to be especially spirit-ridden. Any spirits program of the alcoholic sort would have a lot to live up to in such a setting. But Goodman and crew have given it a good shot — starting with names that also refer to ghostly apparitions. The current list of specialty cocktails includes The Lavender Lady. It’s served in a tall, cylindrical flute and is composed of lavender-infused gin, lavender bitters, lemon and prosecco, the blend topped by a large, bobbing blackberry. The drink comes across unexpectedly barky and cinnamon-like, likely a result of the bitters, but it’s nevertheless both pretty and refreshing. I’d order it again. The Crooked Wig might conjure up a lush lady after a few too many, but it’s actually a rather tame amalgam of Sauza añejo tequila with sweet vermouth, hibiscus liqueur and lemon — perhaps less successful due to the wig’s tilt too far in the direction of the liqueur. Both drinks were served by a perky waitress sporting tall, white Courrèges-like boots that helped her slip seamlessly into the environment. The execution level only improved when we asked Amber — newly arrived from cool Colorado into the inferno of a San Antonio summer — for a couple of classics: the gin-based Aviation with crème de violette, and the rye-centric Manhattan with sweet vermouth. The peanuts and the oddly addicting pretzel-peanut-butter puffs were nearly gone by this time so we could truly concentrate on the cocktails alone. Both were impeccable and served in the metal martini glasses familiar from Feast. (The vessels look cool in context, but I can’t help thinking I’d rather see the drink’s color — part of its allure in my opinion.) The Lucite look continues into Rebelle, the next-door restaurant, in the form of a variation on the so-called Ghost chair. (No accident, we assume.) But the lofty old Madrid Room, its central fountain now replaced by a sleek bar, imposed its will in some ways as well. The original guardrails and light fixtures, for example, were retooled by the grandson of the founder of Voss Metals who had originally done them in the 1920s. The original floors may remain too, but purple booth seating (more tufting) now surrounds a space that was once called “Casablanca” in style, and two large, tweaked reproductions of Salvador Dalí’s unabashedly erotic The Temptation of St. Anthony now face the bar. Note the nude woman perched atop the “golden cup of lust,” then turn back to the bar and order the same; the cocktail menu is modeled on the seven deadly sins — of which lust is easily the most attractive. Here it comes in the guise of thyme-infused Texas gin (the drinks list is heavy in Texas spirits) with Aperol, maraschino liqueur and a topping of sparkling rosé. Insider tip: If dining as a couple, try to reserve either table 60 or 61. These two-tops are on the mezzanine level overlooking the bar with its chandelier of cascading glass tubes — currently lit from above and below in blue, but with the option to change colors. (Light color notwithstanding, this place is decidedly dark.) Tip #2: If available and the weather is amenable, also consider the seating on the covered balcony overlooking Navarro Street and Travis Park Methodist with its illuminated stained glass — there’s actually more light out here, and the setting makes San Antonio look positively urban.

But wherever you choose to sit, “divide and conquer” as chef Stefan Bowers’ menu literally suggests. Divide is comprised of appetizers, both chilled and hot — to share or not. We’d be inclined not to share the terrific merguez-style goat kebabs, were happier to pass along some of the Pernod-cured salmon, and found the veal carpaccio with its odd pickled quail eggs (but appealing ikura roe) in need of some fine-tuning. From the Conquer side, many selections will have to be divided regardless, especially the Lucullan 32-ounce bone-in rib eye (at a cost of $72, it’s billed as serving two to four). Not for us a costly côte de boeuf; we spread our allowance out among four dishes in which the hand of the chef seemed more apparent: green garlic Parisian gnocchi, lobster in green curry, cassoulet Rebelle and roasted bone-in short ribs. Sticklers for tradition may find that the cassoulet strays a tad too far from the very beany and much more integrated version that’s classic in southwest France, but they shouldn’t complain too much about the individual meaty parts such as garlic sausage and duck leg confit. The gnocchi, dressed with abundant chanterelles and seasoned with lots of thyme, were so good that we wished they were larger. The lobster with fall squash was dominated by its kaffir lime leaf component — but gluttony being one of said sins, we managed to finish this luxurious dish to the last drop regardless. The spectacular short ribs also got pared to the bone — though we left behind most of the celery root purée.

And we leave you with this thought: Polynesian chicken was one of the buffet stalwarts at the old Madrid Room. Rest assured that, along with intimations of Casablanca, no ghosts of misbegotten dishes such as this linger at Rebelle. We look forward to trying veal sweetbreads with black trumpet mushrooms the next time around — maybe paired with another bottle of that Gerard Bertrand rosé of Syrah. Here’s looking at you, Reb.

You know that friend that celebrates their entire “birthday week”? Well, say hello to Artpace, which recently wrapped up a yearlong 20th anniversary...