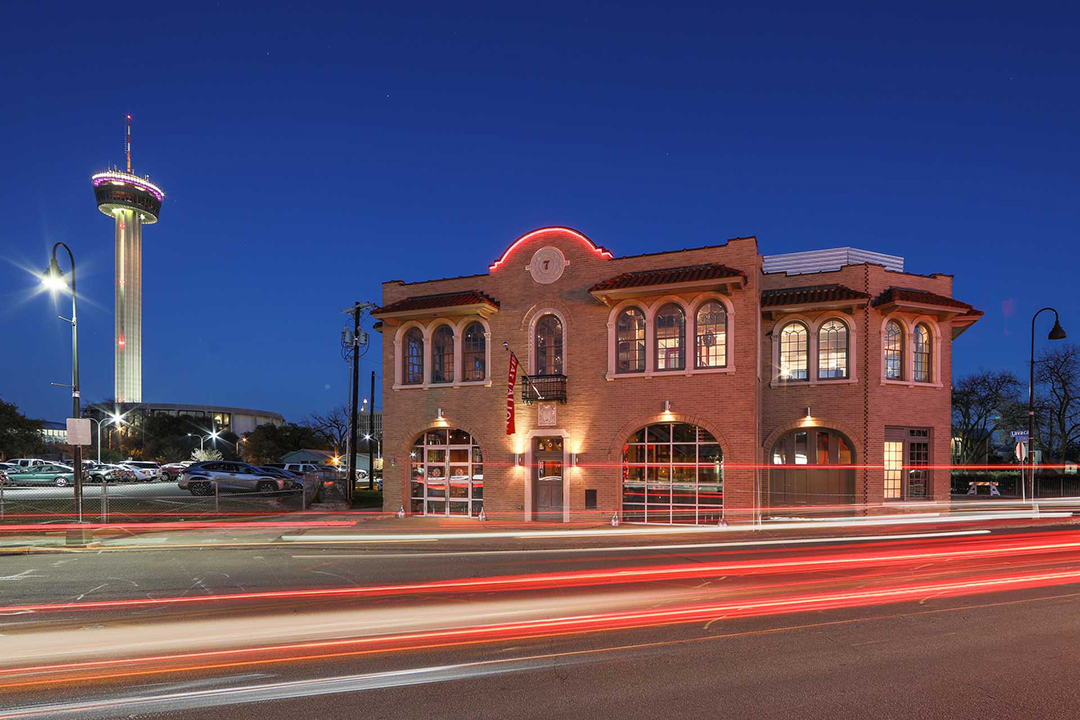 In an interview for a previous article on the Lavaca neighborhood, resident Suzanne Martinez expressed a certain nostalgia for the time when the firehouse on South Alamo was operational: “The men were always there, playing basketball outside … they were [effectively] in charge of safety.” They watched over the kids, she indicated — and the adults didn’t mind their presence, either.

Most of those kids probably never got to experience the inner workings of FH7, but they’re likely old enough now to get a legal peek inside its reincarnation as Battalion, a high-concept Italian restaurant and bar by Feast and Rebelle’s Andrew Goodman and Stefan Bowers. Leave any fireman fantasies at the door — but get ready to cultivate some new ones. An island bar commands the center of the downstairs space; a Promethean, blown-glass light fixture hovers overhead, setting an over-the-top tone that continues throughout. You’ll need reservations for a table, but a seat at the bar is usually easy to come by. Claim one or two and get ready to let your eyes do the feasting, at least for starters. And a good place to start is with the bar top itself; it’s in beautifully matched (and quite unusual) striated marble. (I’m not accusing the designers of thinking mythologically, but do note that at least one name for the stone is Striato Olympico and, coincidentally, that Prometheus’ eternal claim to fame is that he stole fire from Mount Olympus for the benefit of mankind. Just saying.) The marble’s subtle tones play right into the prevailing color scheme of grays (the downstairs concrete floor is a lustrous, deep gray that looks almost leather-like) and silver metallics (including polygonal light fixtures by British designer Tom Dixon and swirling, glazed tiles on the bar front and elsewhere) accented by reds and oranges in everything from water bottles and chair seats to the imposing elevator, flanked by a stairway with wood treads stained black, that allows more dramatic access to the second floor than the firemen ever had. (Their daily drama was reserved for fire-pole descents from living quarters above — and, yes, those poles have been preserved, their holes in the ceiling now infilled with acrylic.) Homage is paid to the building’s original occupants — historically called leatherheads due to the helmets once worn — in other ways as well, foremost among them the custom cocktail list. Yes, there is a burly “Leatherhead” composed of Bulleit Bourbon, Grand Poppy liqueur and bitter Cardamaro. The tequila-based Arsonist with orange soda is good in a refreshing sense, as is the Battalion Spritz with prosecco and house-made soda. But my favorite so far is Negroni-like The Rock with Bombay Sapphire, Cynar and Cardamaro. If bar manager Gabe is there, he can give you a rundown of the meanings of all the cocktail names — I had no idea what the “A-Side” meant, for example. Gabe can also effortlessly turn out classic cocktails of your own choosing. I asked for an Aviation (gin, maraschino, crème de violette and lemon juice) and was rewarded with a perfect, violet-hued libation. The color seemed to fit right in, and the drink kept me at the bar sampling appetizers and indulging in more people-watching. We’ll get to appetizers, but first the voyeurism. There’s not an actual dress code at Battalion, but the interior’s rough concrete and steel played against slick surfaces and bold color accents, does set up some expectations of at least a little drama. For the most part, women seem to have gotten the message; I especially recall one blonde clad in a long coat emblazoned in a bold, black and white chevron pattern. Whoever you are, you looked spectacular in the setting. Guys, on the other hand, are generally letting the gender down. If there ever were a place to indulge your long-suppressed dress-up fantasies, this is it. Go for it. Don’t be ashamed to feel fabulous descending that staircase under the enormous, theatrical spotlight.

We’ll also get upstairs eventually, but first to a little appropriately charred eggplant dip with pine nuts, mint oil and sotto-voce cocoa; it will go with almost any drink you might want to throw at it, including many of the wines from Battalion’s decidedly non-knee-jerk list. Served with puffy focaccia, the ’Nduja mascarpone, on the other hand, is at least three-alarm in its combination of spreadable, Calabrian sausage with creamy cheese, fennel pollen, lemon chile powder and roasted walnuts, and consideration of a fight-fire-with-fire drink will be essential. One advantage of sitting for a time at the bar is that certain details pop into perspective. You’ll need to visit at least one of four, differently decorated, unisex facilities. (In fact, you should visit them all; if anybody asks, you’re a design freak, not one of another kind.) The steel reinforcing of the ceiling that was required to support the kitchen above is another example; the open kitchen would have metaphorical weight (Prometheus again) even without the actual heft of equipment. It’s also visually active, right down to the melting, pop-art pop on one of the counters — red, of course. In the dining space, metallic chandeliers replace the geometric light fixtures of the first floor, marble table tops recall the bar, and metal-glazed tile again provides glistening glam. Be warned that the space is acoustically active, too. But once you’ve sat through a primo of, say, grilled octopus, a pasta such as pumpkin ravioli with Amaretto and sage (don’t worry — the plates are small), maybe a parmesan-and-herb-crusted lamb chop, and a bottle of vino rosso from Etna, you’ll have adjusted nicely.

But don’t over-compensate; upon exiting, you want that dramatic descent to the first floor to proceed without a Tillerman’s pitch and sway.

“Some say you must look the part in order to play the part, but as much as gender can be...