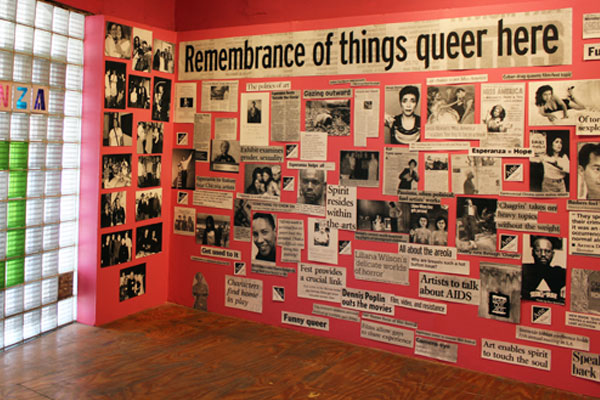 After the Supreme Court’s landmark case making gay marriage legal in 2015, it was easy to believe that gay people had finally achieved some semblance of equality. Yet, with the election of President Donald Trump one year later, it seems minority communities are more vulnerable than ever.

Moved by the current political climate, the Esperanza Peace and Justice Center put out an open call for art that represents the local LGTBQ community. The center’s latest exhibition, #Queergrito Esperanza 3.0, is the result of that open call and features over 27 artists with a wide range of work comprising poetry, photography, prints and paintings.

The show is curated by Gianna Rendon, Penny Boyer and Eliza Perez. The works included are not merely representations of same-sex love and diverse gender identities, but a call to action during a time when basic rights for LGBTQ people are being threatened. In Bags, Baggage, and Other Trivia, a mixed media assemblage consisting of a suitcase and two ceramic masks at its center, Bernice Appelin-Williams explores the social construct of race in America. In an artist statement she says, “The title references that which we all carry (bags, baggage..) whether implied or blatantly intentional.”

Inevitable Reality, a painting by Nicki Lucio depicting human flesh being sewn together is a contemplation on transgender identity and its “inevitable surgeries.” The artists states, “… I paint in the vainest of hopes that my work will instill a seed of reflection into those who are critical of me in that they may someday see that there is more than the making of my clothes and the shape of my body.” Esperanza 3.0, an exhibition within the exhibition, gathers newspaper headlines, video footage and various materials documenting the nonprofit’s 30-year trajectory. Among the highlights are images from program material for Miss America a play by Jesus Alonzo starring the late Erica Andrews. Visual art has been a vital part of the programming at the Esperanza since it was founded in 1987. In 1988, the nonprofit presented a then-radical exhibition titled, The AIDS Series, and in 1993, its annual gay and lesbian show, Closets: The Queer Experience, led to the eviction of the Esperanza from its original building on North Flores.

Today, the Esperanza continues its important work providing an outlet for under-served communities as this exhibition demonstrates.