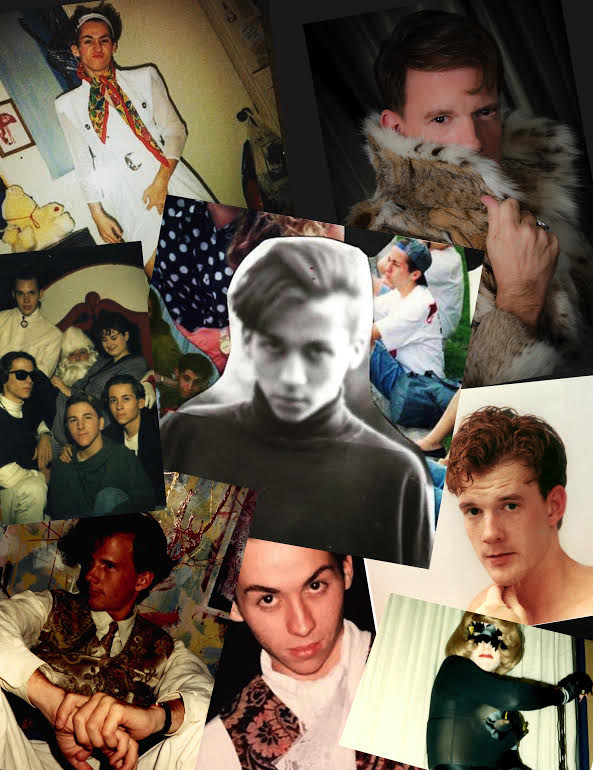 We are having brunch in Hipsterville, New York (aka Williamsburg, Brooklyn) but in our conversation we’ve returned to the North Star Mall food court circa 1990. It’s where a pivotal moment in his touching and hilarious memoir Bad Kid takes place. He was a freshman in high school about to shed his “lesbian employee of Blockbuster Video” look and go hardcore gay, goth and druggie. I could have been around the corner buying a mock turtleneck at The Limited, sporting my Simply Red look. I was a senior at Trinity University — as seasoned as your grandma’s iron skillet when it came to booze and drugs — and about to hit New York for a career in publishing and a deep dive into the bottle.

Crabb is a three-time Moth StorySLAM winner and hosts Moth events around the world. Bad Kid is his adolescent coming of age that takes place in early-1990s San Antonio. It’s based on his critically acclaimed, one-man show of the same name. My memoir, Dangerous When Wet, rose out of the ashes of my recovery from alcohol and drugs. It’s about my Beaumont childhood with my Texas tornado of a mother, Mama Jean, gay coming-out at Trinity, and the “high” life in New York.

Over eggs and virgin Marys, we became “returners” and traded stories about our favorite haunts in San Antonio, our mothers and the fine line of addiction. “In the pages of our books we both ingest enough booze and drugs to fill an H-E-B.”

Jamie Brickhouse: I love that you called the Bonham Exchange “The Bottom Exchange.”

DC: (Laughs) I loved going there. That was the first real club I ever went to.

JB: Me too. But you first went to FX and the Z clubs: Changez and Phazez. You nail the mise-en-scène of those clubs perfectly. Have you been back to the Bonham?

DC: It’s different. I went on a Saturday recently, and it was like a tourist club. That thing happened that us gays are so good at. We find a dilapidated neighborhood, make it lovely, and all the straight people come in. There used to be this giant Hispanic drag queen named Ramona, and she hated it when gay guys brought their straight girlfriends, and she’d look at their hair and declare, “Your tint is for filth.”

JB: I remember a tall, striking man dressed head-to-toe in black with a long, ebony ponytail. He was there every weekend, danced alone to every song and knew every lyric. We called him Miss Bonham. All was right in the world once we saw her.

In the pages of our books we both ingest enough booze and drugs to fill an H-E-B. Your acid-trip stories are both a riot and harrowing. I tripped on acid down the Guadalupe River and saw Nell Carter on a float.

JB: No. It was the acid talking.

DC: Damn. I got so excited.

“Our mothers are very different, but I love how they were both cringe-inducingly confrontational about our sex lives.”

JB: But what I noticed about your drug and alcohol intake is that you didn’t seem to have the unquenchable thirst that I had.

DC: Yeah, I know. An addict has that little seed that’s waiting to be awakened, and for whatever reason I didn’t have it. I’m lucky. I loved the social experiment and the adventure of drugs (like watching fucking tulips grow). I feel like your book did a great job of showing what addiction is.

JB: Thanks. Did you ever think you were an addict?

DC: When I was a teenager I wanted to be one. Going to rehab was this sort of alt-youth rite of passage. “Guess what? Sarah went to rehab.” You know what I mean? I can’t do the heavy stuff anymore. I think if I did acid now, I’d want to call my accountant and ask where my 1099s are.

JB: I get that. Acid was the first drug that turned on me. I remember acid-tripping on the River Walk during Fiesta. I started freaking out about every bad thing — catastrophizing — that could happen. Someone could open fire from a riverboat! These cascarones might be hand grenades! I had to return to the safety of campus.

DC: I showed up with my friends at the Tower of the Americas on acid. We were already conspicuous because of our goth look. I straddled that line in the floor where it rotates and put one foot on either side until I was frozen in a full split. Um, I was asked to leave. Now when I visit San Antonio, I always go to the Tower of the Americas and have a cocktail alone to take in the city. It’s a ritual.

JB: You are a returner. I have to say that your book gave me blue balls. I kept waiting for you to get laid, but you didn’t — which is actually kind of sweet. When did you lose your virginity?

DC: It was college. Sophomore year.

JB: Wow. You were a late bloomer.

DC: But an early bloomer with drugs. I’m jealous of your hotel story.

JB: You mean when I was 15 and lost it in a three-way on the family vacation in Acapulco?

DC: Yeah. I was frightened of intimacy.

DC: All of that. For all my hedonistic boldness, I was very insecure and scared of intimacy. It took someone shaking me and saying, “Hey, can we do it?”

DC: So who would play Mama Jean with her big hair in the movie?

JB: I could see Christina Hendricks. But I’d really like Meryl Streep to play both Mama Jean and me.

DC: A tour-de-force. Who would play you?

JB: I’d like to finally be hot, so Eddie Redmayne. Bad Kid is perfect for the screen.

DC: I’m in the midst of writing a pilot for Bad Kid and have some meetings with television producers in LA later this year.

JB: Fantastic! I know you continue to perform Bad Kid around the country. Are you working on another book?

DC: I’m writing a comedic memoir about the gristmill of health issues. A big part of my life the last few years has had to do with my health — I was extremely sick a few years ago — and being a working artist with 11 jobs and dealing with Crohn’s disease. And you?

JB: A comedic memoir about my father, Earl, who died last year. Working title: I Favor My Daddy. Let’s do this again when our second books come out, but let’s be genuine returners and meet at the Tower of the Americas and sit and spin.

Jamie Brickhouse has been published in The New York Times, Salon and Out, guest blogs for The Huffington Post and is a Moth StorySLAM winner.

I hate to be the one to break this to you, but it’s too late for Lavaca. I don’t mean...