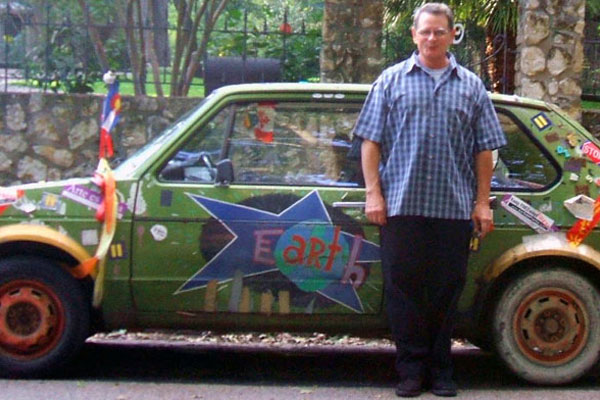 Artist and activist Gene Elder was arrested in Alamo Heights on July 14, 2016. (Photo by Sam Sanchez)

Artist, activist and Out In SA columnist Gene Elder says his arrest last summer in Alamo Heights, where he where he was charged with interfering with an arrest and resisting arrest, was his way of making art.

“I just got out of my car on Bastille Day July 14th, 2016 and put on my art cap and made a contract with myself that I would get involved and insert myself into this situation and what ever happens is the art,” he says about the incident.

Elder was taken into custody and spent a night in the Bexar County Jail after he tried to give his business card to a boy who police were questioning and who Elder believes was being bullied by the officers. “They had him standing at attention in front of the police car headlights and I could tell from their body language that they were bullying him,” he said at the time.

Police grabbed Elder as soon as he approached the boy. “I was thrown up against the patrol car and both officers shoved my arms up higher than is possible for them to go behind my back and yelled at me that I was being arrested for resisting arrest and interfering with an arrest.”

Elder decided he wanted his guilt or innocence decided in a court of law rather than take a plea deal. At his trial last February, a jury found him not guilty of resisting arrest and guilty of interfering with the duties of a public servant. County Court-at-Law No. 4 Judge Jason Garrahan sentenced him to a suspended 180-day jail stay, a $250 fine and court costs, and 36 hours of community service.

“I learned that officers can reach in their Trick or Treat bag and indiscriminately use an available terrorist device called Resisting Arrest. A serious charge I discovered. Luckily the police patrol car camera showed that I was being shoved by the officer so I was found innocent,” Elder wrote to his friends in an email.

Elder is now concentrating on paying his fines, courts costs and $52 a month for his probation meetings. He has started a GoFundMe page where he is raising cash to pay his arrest-related debts. “You can show your art support during this Contemporary ARt Month by helping Gene,” he writes jokingly.

Despite all the trouble the incident has caused him, Elder doesn’t express much contrition over his transgression and instead sees it as an artistic expression.

“I am way past thinking that art is something square on the wall,” he explains on the GoFundMe page. “Art has always been about life and the human condition and this is where I am in my art making. The trial date landed on February 22, 2017, Washington’s birthday, so I knew that Mount Rushmore was watching.”

In summing up the entire experience, Elder says with tongue in cheek, “The real injustice is that the police were interfering with my duties as an artist.”

You can help Gene Elder pay his debt to the City of Alamo Heights with a donation on his GoFundMe page.

In the Silo of McKays at the Hill Country Science Mill in Johnson City, Wimberley artist McKay Otto has placed...