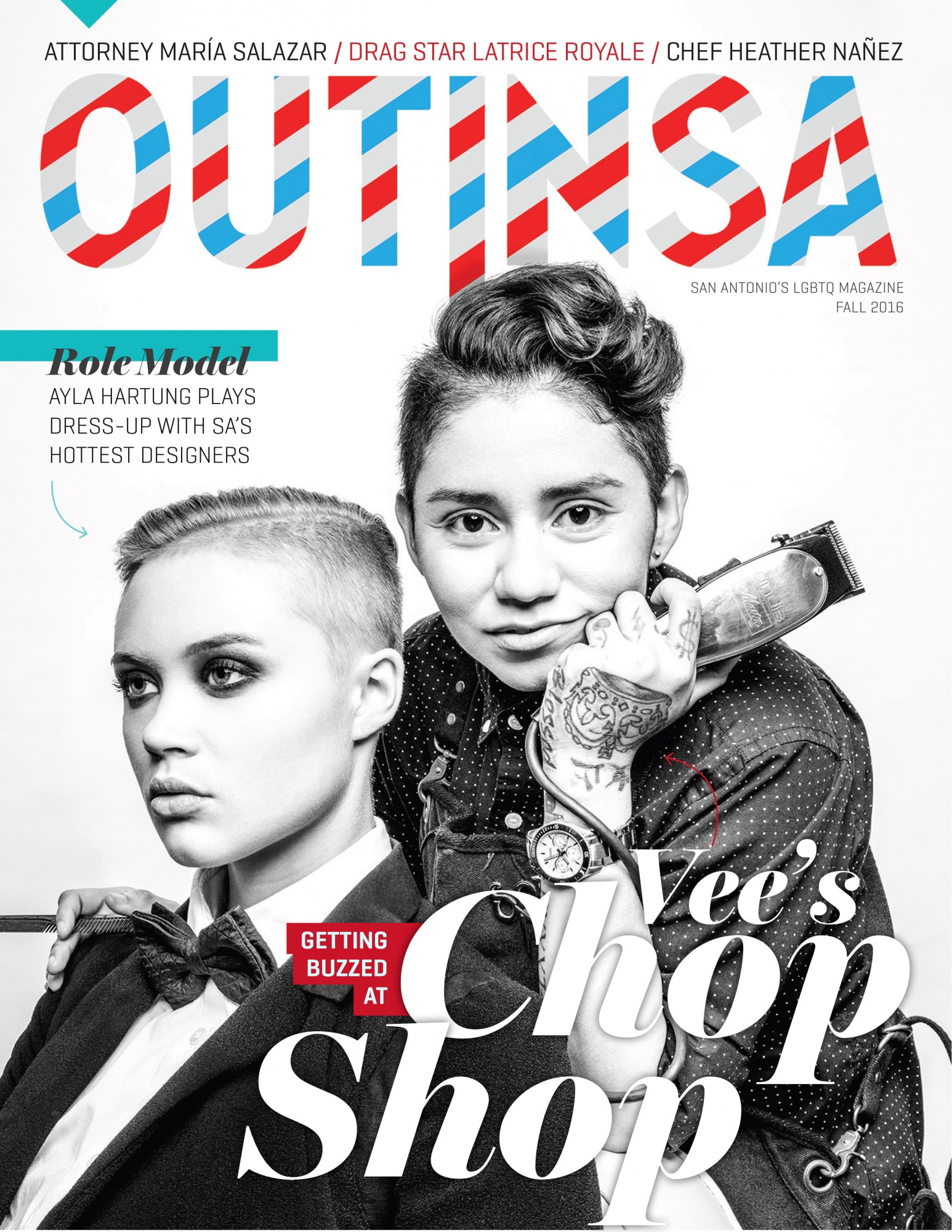 Vee Hernandez’s studio space in the Salons by JC is decorated with San Antonio Spurs and New England Patriots collectibles. A mini fridge in the corner is stocked with cold water and soda. In many ways, Vee’s Chop Shop is a typical stylist’s station, but to watch the petite, curly-haired Vee cut hair is to watch an artist deeply immersed in her work, gently gripping a client’s head for added precision, bringing radiance to a human canvas.

The 33-year-old barber is known for adding a touch of modern style to vintage men’s cuts from the ’60s and ’70s — fades and combovers with hard parts — but her skill set is deep and versatile. Vee has built a steady clientele of lesbian, queer, femme and butch women who want undercuts, custom etchings, or partial head shaves. “Being a butch woman, or being just gay in the community, or being a lesbian,” Vee said, “sometimes we’re not given the same treatment by males because they’re like, ‘I don’t care to cut your hair.’”

Vee works to create a welcoming space for queer women to talk about their partners and personal lives. This added appeal brings in customers like Olivia Youngblood. She was referred to Vee’s Chop Shop by writer Anel Flores, whose dashing undercut is the perfect word-of-mouth advertising for Vee’s talents. “She really listened to the hairstyle I was trying to achieve and did a great job capturing my vision,” Youngblood  said.

Vee trained in barbering and cosmetology in Lubbock and at the Milan Institute, but she found her calling at age 12, when her Uncle Luis asked her to cut his hair. Vee protested: “I don’t know how! I don’t even have scissors!” But Luis handed her a pair and issued directions as they sat on a row of outside stairs, he on the bottom step and Vee on the top, Luis pointing, Vee anxiously snipping. Soon, she was cutting her brother’s hair while the neighbors watched, which led to more clients. Neighborhood children would sit on an upside-down bucket, draped in a big trash bag, to get their hair cut by Vee for $5.

Vee’s path from the steps to the salon was anything but direct. In high school, she stopped cutting hair and began spending hours each day at a local Gold’s Gym, which became a second home. Her newfound passion led to an internship and a job at Amarillo Community College, where she earned a certificate in personal training. As a first-generation college student, she said, “It was hard. I had to do it all on my own.” Eventually she burned herself out on the weights and machines. “Cutting hair was passion,” she realized. “Working out was a lifestyle. I chose my passion.” When she made the decision to enroll in Lubbock Barber School, she found an unexpected advocate among the staff — a woman named Kiki from Mississippi, who saw some of herself in the young Vee. She recalls her saying, “Vee, you know what? I’m gonna make sure you get into school.” When Kiki made good on that pledge, Vee picked up the clippers for the first time in years, promising, “If this is good to me, I’m gonna be so good to it.”

Vee was born in Pharr, Texas, but as a small child she woke up to the jungles of Veracruz, in Southern Mexico. Vee, her mother and brother lived with her grandmother in a house with dirt floors and hammocks for beds, surrounded by lush foliage and tropical wildlife.

“You would step outside of my grandma’s house and you were in the jungle,” she said. “You would hear the coconuts drop … You would just hear them crashing down through the [banana leaves].” It was an ideal playground. They sprinted through the undergrowth and used slingshots to throw rocks at the iguanas sunning themselves. She recalls with pride a picture of herself being baptized at 3 in a traditional white jarocha.

When she was 5, Vee’s family moved back to Texas, eventually settling in Amarillo. She describes her childhood as “rough.” Her father, a Cuban immigrant, was not around most of the time, and the family struggled financially. “We were close,” she said. “We weren’t raised with a lot, but we made the best of it.” Her maternal grandmother was a key part of a community of women who supported Vee’s family and cultivated her sense of determination. She recalls in particular an aunt who didn’t have the luxury to mourn her husband’s death, returning quickly to the day-to-day rhythm of life. “Yes, I knew poverty,” she said. “But I also knew that, with hard work, you could have a great life.”

Vee’s Uncle Luis continued to be a steady presence, too, until his sudden death in 2011. He was her best male role model, she says, but she never fully came out to him. “I felt like there was no need, he knew it and I knew that,” she said. “To tell the truth, I don’t think he cared about things like that. He just loved people. He just loved me for who I was.”

Vee also found an ally in her older brother, Alberto, the first person she came out to. She was 21, had moved away from home, and was in her first serious relationship with a woman. “I called my older brother one day, just out of the blue, and did it. He took it with such grace and moved from it like if we had been talking about dinner plans,” Vee said. His example of unconditional love spread to her family members, who also remained lovingly supportive. 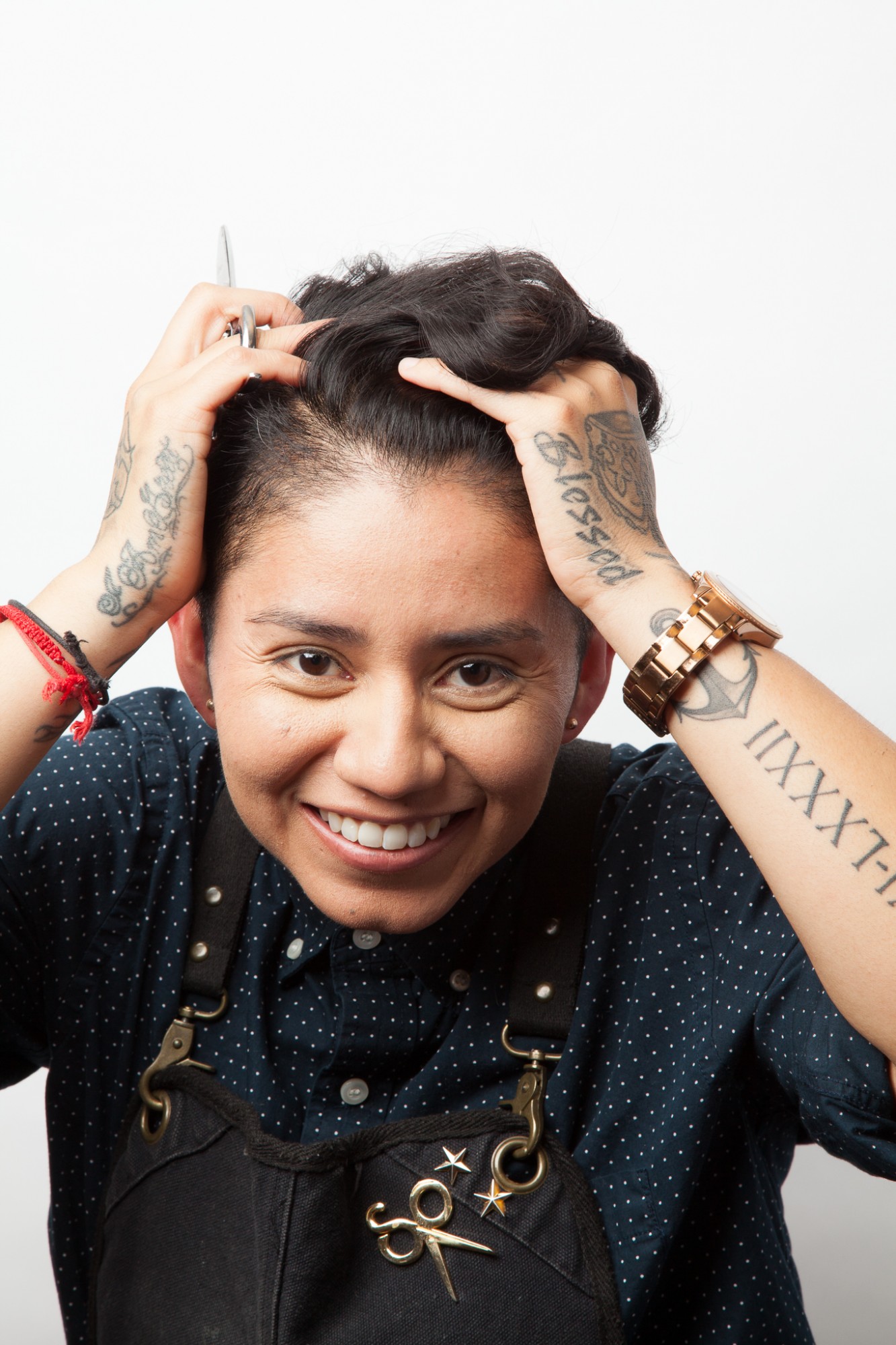 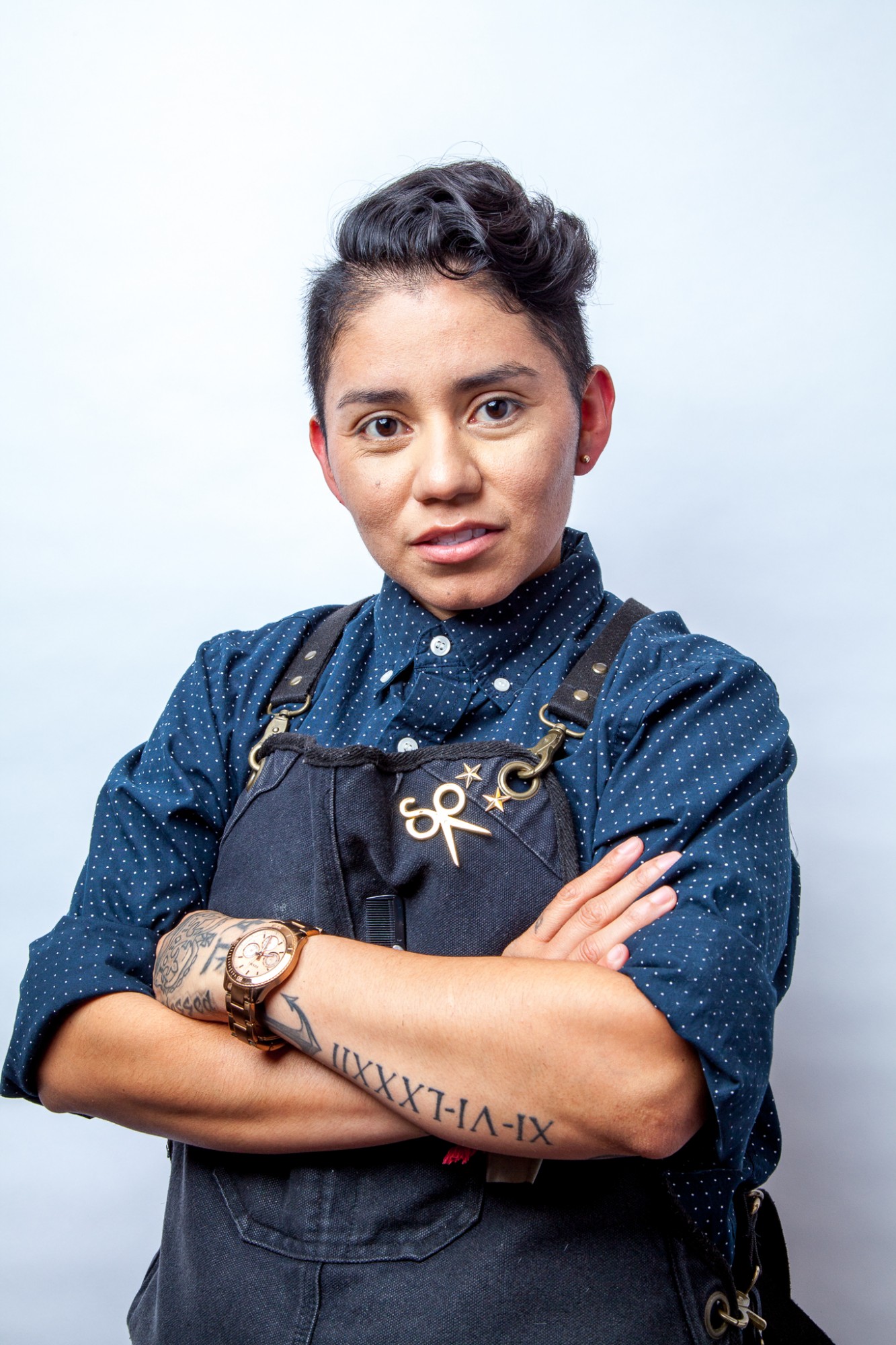 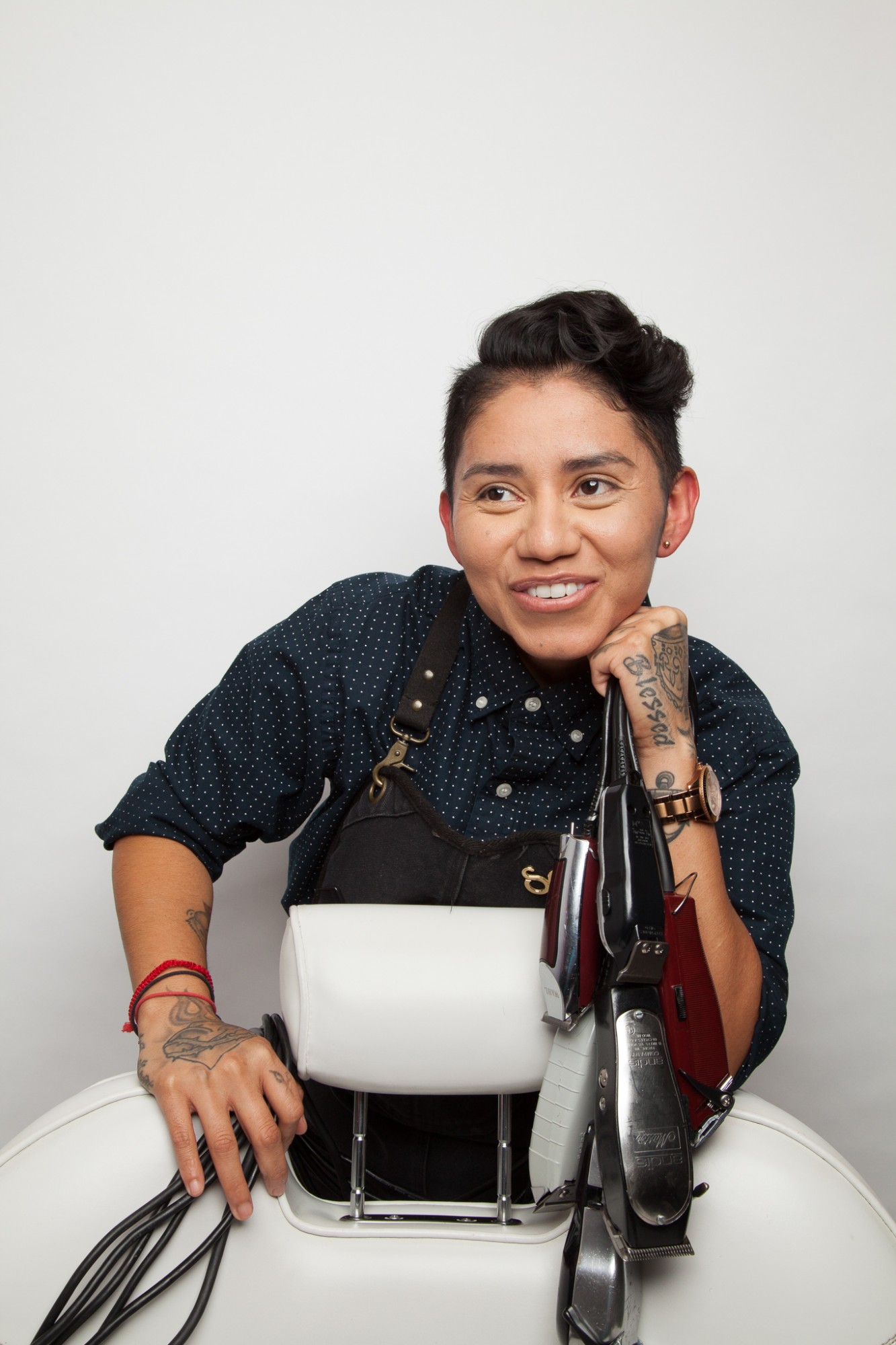 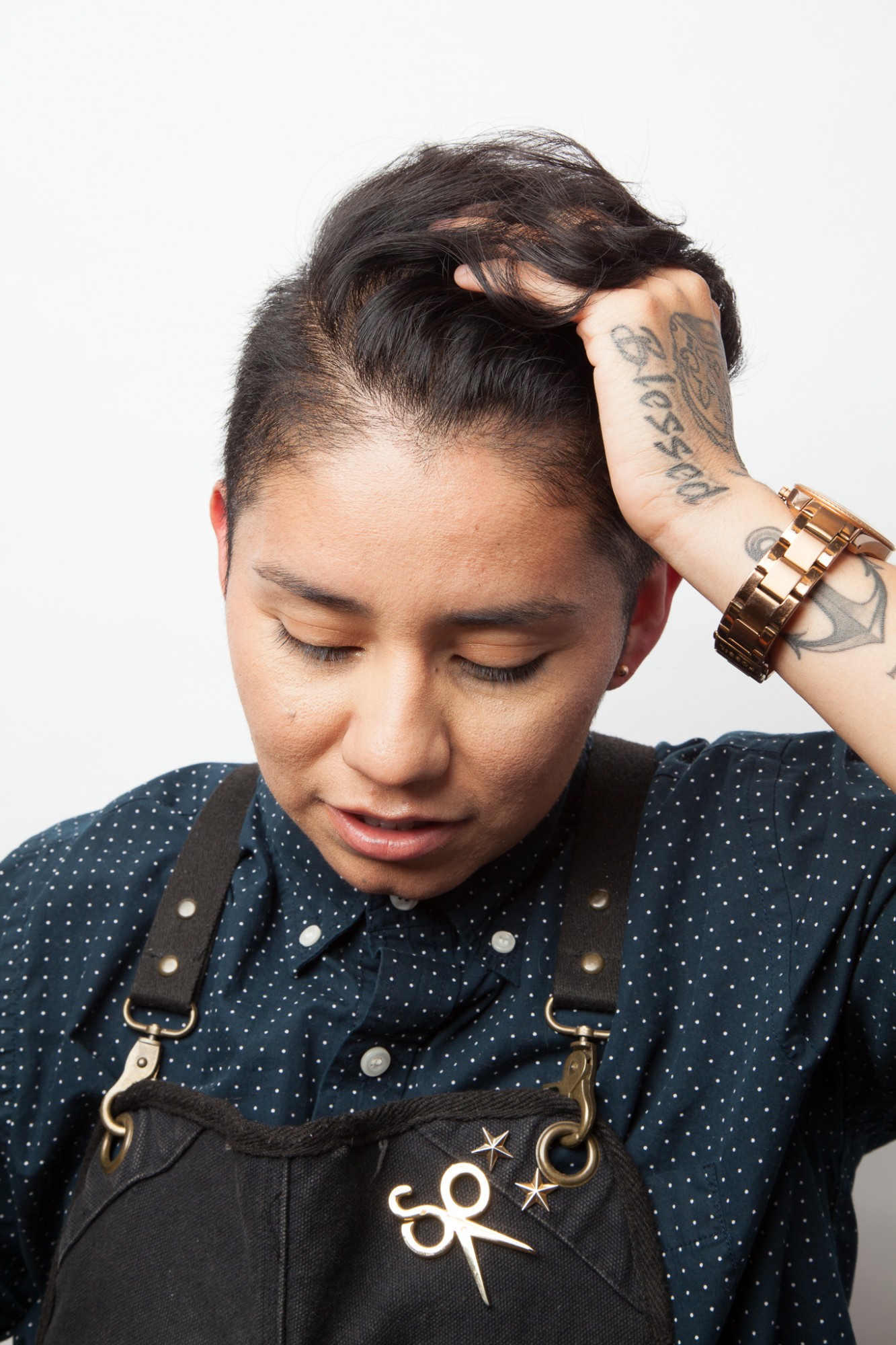 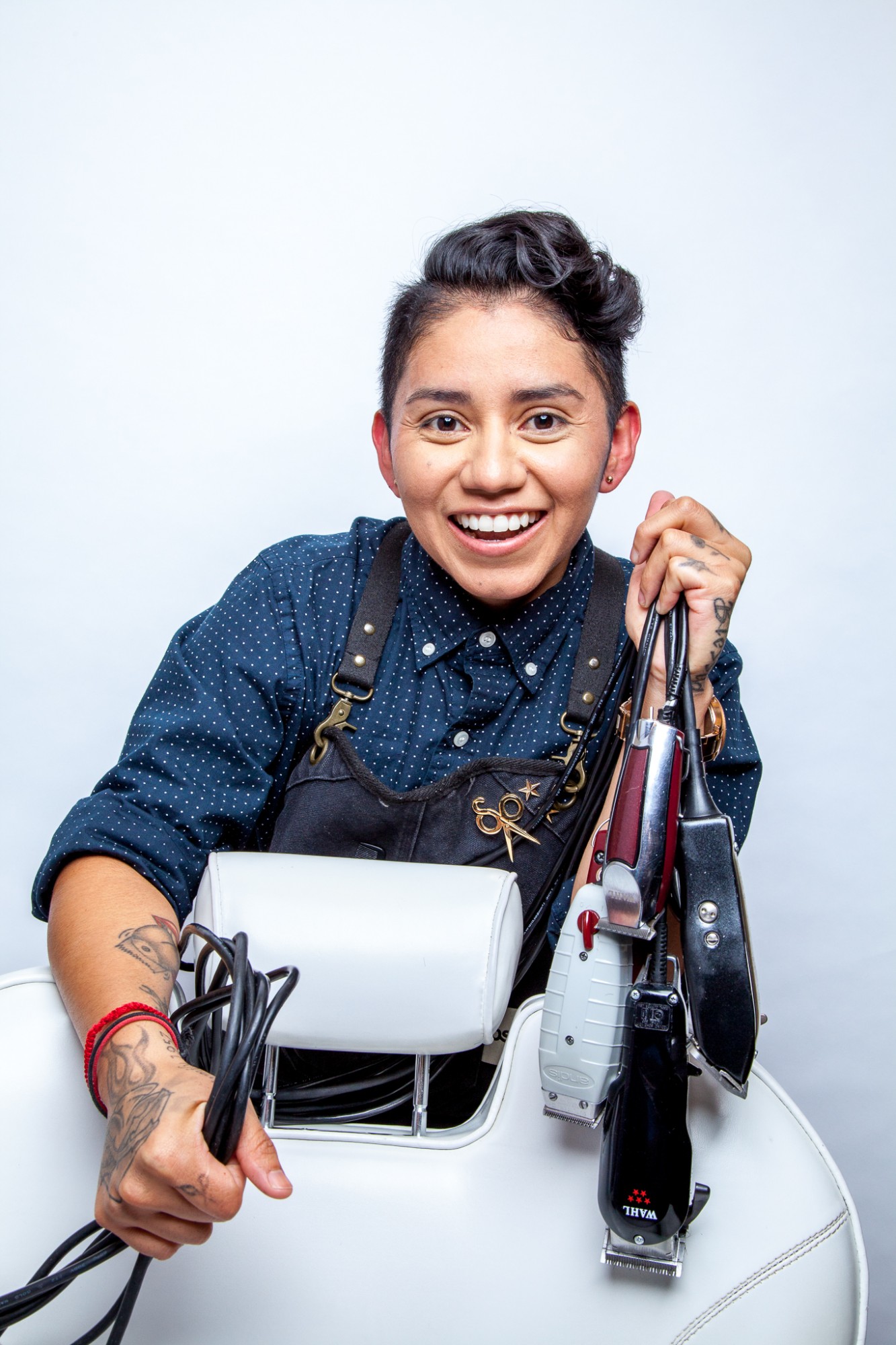 Vee has thrived in San Antonio’s strong LGBTQIA community, and found a fulfilling personal relationship, too. A self-proclaimed “homebody,” she spends free time with her girlfriend Mars, snuggling up to watch a movie, cooking together, or listening to music and drinking wine. They are proud parents of a dog named Jupiter and plan to add a Pluto to their family orbit soon. In her spare time, Vee likes to support other locally owned businesses. One of her favorite spots is the Mexican vegan restaurant, La Botánica, which she describes as a safe space where she and her partner are shown respect. Last December, Vee donated haircuts for La Botánica’s event Jotos y Recuerdos. Proceeds from the cuts supported programs for San Antonio LGBT youth and the outdoor-activity coalition LezRideSA.

In the next five years, Vee plans to open Vee’s Chop Shop as a stand-alone business, where she can help create career pathways for other stylists. Despite her success — and a devoted fan club of straight male allies — she is regularly reminded that barbering is a male-dominated trade. “I think women are very underestimated. I don’t think just in the barbering world, in any aspect,” she said. Vee is often met with hesitance by men who prefer to have their hair cut by another man, and she also runs into professional envy. “I think men can become intimidated by a female doing so good in this business because it’s so dominantly run by males.” Yet Vee encourages women to enter the barbering world, arguing that their presence will make the profession more inclusive. Her eyes welling with tears, Vee praises her second family, her clients. “They propel me forward. They pick me up, even when I can’t, even in my personal life,” she said. Their presence is, “what makes Vee’s Chop Shop run, and it’s what’s gonna open the door for a shop.”

San Anto Cultural Arts will honor two San Antonians who have contributed to the culture of their community by proclaiming...