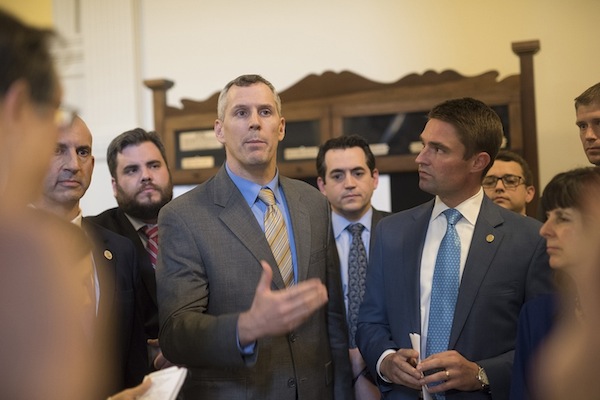 The Texas Freedom Caucus in a hastily called press conference telling the press their intent to kill bills on the Local and Consent calendar in retaliation for what they say is unfair treatment during the House session on May 11, 2017. (Photo: Bob Daemmrich for The Texas Tribune)

As part of an ongoing push by some Republicans to insert religious freedom protections into state agency review bills, House lawmakers on Monday sparred over attempts to amend the State Bar of Texas sunset bill in a way that opponents say could open up prospective LGBT clients to discrimination.

In considering Senate Bill 302, the State Bar of Texas sunset bill, House debate centered on an amendment that would prohibit the state agency from enacting rules that would “adversely affect” someone’s admission to the bar or their law practice because of their religious beliefs.

“I do not believe we can go too far in this body in ensuring that the First Amendment rights of Texans are protected,” state Rep. Jeff Leach, R-Plano, told the chamber in laying out an amendment originally filed by his Republican colleague Matt Krause.

Leach cited the need to ensure that the State Bar abided by the U.S. Constitution and not rules adopted by other legal governing bodies, namely the American Bar Association, which last year adopted a professional misconduct rule to bar lawyers from discriminating on the basis of sexual orientation and gender identity. (That rule has not been adopted in Texas.)

The original amendment applied only to State Bar rules related to admissions, but it was amended by state Rep. Matt Schaefer, R-Tyler, to also include an attorney’s “continued practice of law.”

Democrats took turns at the back mic to question Republicans on why existing religious freedom laws and the First Amendment weren’t enough protection for Texas lawyers. Some Democrats implored their colleagues to forget about party-line votes and focus on passing sound policy. Others needled Republicans on what they described as a proposal to allow for religious refusals, particularly against LGBT Texans seeking legal assistance.

“Are you saying that there’s going to be a court-appointed attorney situation and the attorney … says this person is a lesbian I don’t represent lesbians so I’m not going to accept this case,” asked state Rep. Diego Bernal, D-San Antonio. “If the amendment passes, does that legalize that situation?”

Schaefer responded that he didn’t “imagine that being a scenario.”

In presenting another hypothetical situation — a lesbian looking to adopt a child — Democratic state Rep. Celia Israel of Austin, who is a lesbian, pointedly asked Schaefer whether he believed homosexuality is a sin.

“Yes, I do,” Schaefer responded after a brief pause.

“Do you think that if I, as a lesbian, were to ask an attorney to help me adopt children, that that attorney could say, ‘I’m sorry I have a religious belief and therefore because of this change in the law I don’t have to help you adopt a child?’” Israel followed up.

“I think there are many attorneys that would help a client in that position,” Schaefer responded. “There’s nothing wrong with attorneys being matched to a client that they can in due conscience implement the desires of their client. That’s what you want.”

Asked by Israel if he understood how the proposal could cultivate “hatred,” Schaefer responded: “I think that’s silly.”

The amendment was adopted on a 85-59 vote before the House tentatively signed off on the sunset bill.

The San Antonio Gender Association announced on May 13 that it is endorsing Michael Montaño in the race for the...