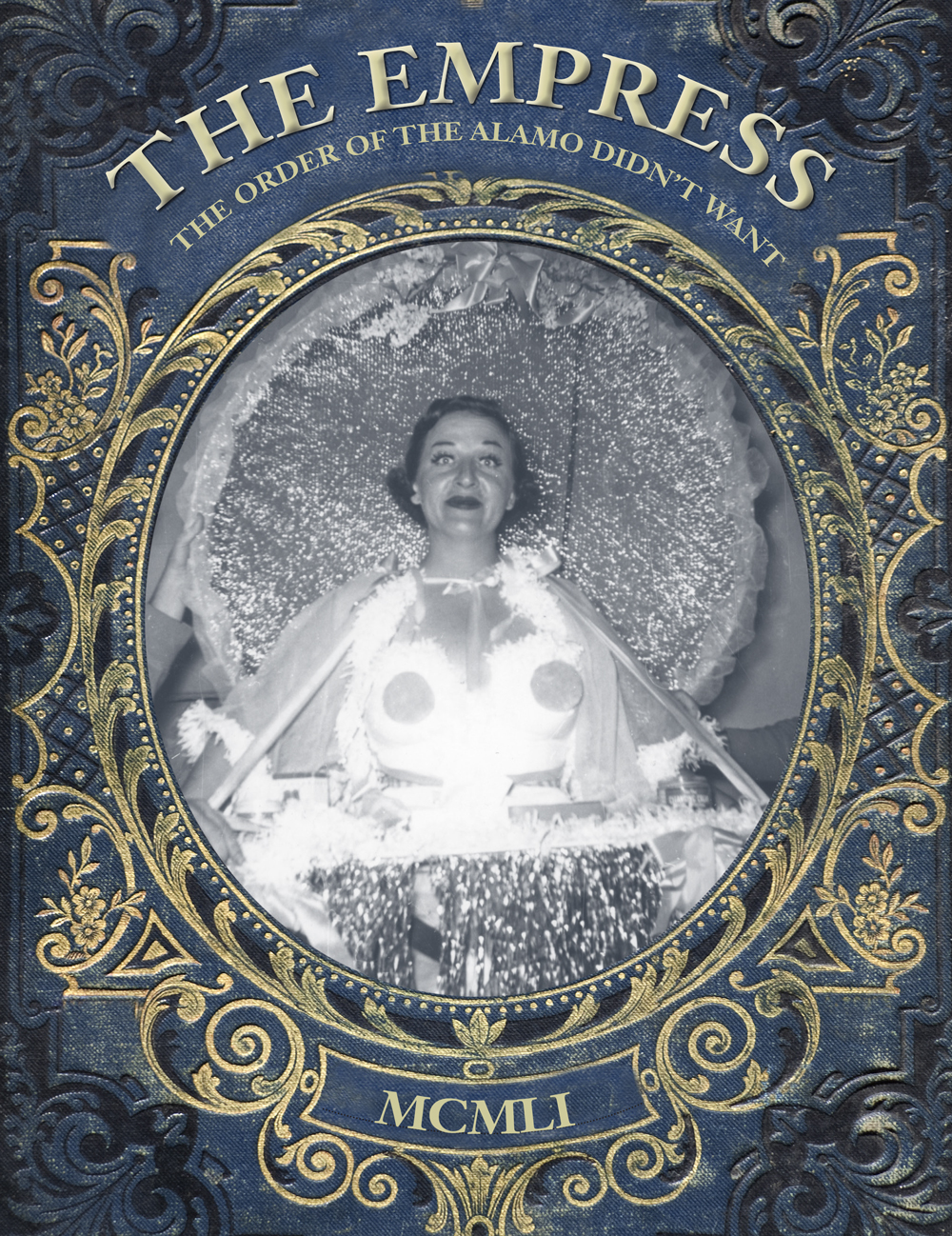 Ann Thompson, the 1953 Empress of the Court of Cosmetic Subterfuge. Image courtesy the Texana Collection and the Playhouse.

Cornyation was an important part of the democratization of Fiesta.

Children fidgeted and adults downed the last of their longneck beers as they waited for the show to begin. The sweeping Arneson River Theatre was in the middle of the Night in Old San Antonio (NIOSA) midway, pushed against the edge of the river. The San Antonio River dissected the audience from the stage, and the steep staircase allowed the audience to tower over the performers. Audience members clutched the thin, broadsheet programs, which proclaimed this event the Corny-ation of the Order of the A-corn.

Joe Salek, the director of the San Antonio Little Theatre (SALT), comes onto the stage and announces himself as the Lord High Chef. In the first show, the Lord High Chef proclaimed: “Ladies and gentleman, we are gathered together this evening to witness a Conclave of Royalty. I, the Lord High Chef, have summoned from the far corners of the Earth … Regal Sa-Lady Ingredients, and am prepared to mix (with the aid of my assistants) a COMBINATION TOSSED SALAD the like of which has never been seen before and probably never again! The culmination of this culinary artistry will be the Crowning of the Salad, The Empress, Herself, by King Anchovy I. Whether you realize it or not you are sitting on the rim of a huge wooden bowl that is … slightly cracked.”

And cracked it was. Audience members laughed as women paraded down the stairs in various attire, announced by the Lord High Chef as the Duchess of Parsley and Onions and accompanied by flowery language about cooking. King Anchovy I, businessman Howard Bumbaugh, crowned Amy Freeman Lee, a local artist, as Empress. Audience members howled and laughed at the new form of entertainment. A positive review of the first Corny-ation in The Light remarked at the cleverness of the script, and the humor of Queen Amy Freeman Lee, who ignored the entertainment on her behalf onstage by reading the funny papers, filing her nails, and playing canasta.

Long before comical empresses and drag queens danced on the Empire Theatre stage, Cornyation was performed in the 1950s and 1960s for a family audience of thousands. From 1951 to 1964, Cornyation duchesses paraded down the steps of the Arneson River Theatre in downtown San Antonio to raise money for a community theater company. They performed as part of NIOSA, a family-oriented Fiesta event.

Cornyation has played an important role in changing Fiesta. When Fiesta began, many of the events were exclusive and run by San Antonio elites. In the 1950s, Cornyation was an important part of the democratization of Fiesta into an event that is more inclusive of everyone who lives in San Antonio. One of the most important ways that Cornyation has made Fiesta more inclusive is as a place where audience members could see gay art and culture, along with some of the best festival satire in the city.

The Queen of Mascara from the Court of Cosmetic Subterfuge, 1953. Image courtesy the Texana Collection and the Playhouse.

In the earliest years of Corny-ation, it satirized one of the oldest events in Fiesta San Antonio, the Coronation of the Queen of the Order of the Alamo, an elaborately staged presentation of 24 debutantes in highly embellished gowns and trains as duchesses who attend the newly crowned queen. With merry courts like the Court of Broken Traditions and the Court of Cosmetic Subterfuge, the satire spoofed the pomp and circumstance of the coronation. The Court of the Glorified Barnyard is an excellent example of style of satire used in Corny-ation. The Prologue of the Glorified Barnyard noted in the program that, “As the strains of the great orchestra fade, the LORD HIGH AGRARIAN magnanimously summons the SHARE CROPPERS to render homage to royalty.” King Anchovy arrives on “Ye Old Irrigation Ditch,” and the duchesses included four “Country Duchesses” followed by four “In-Town Queens.” The finale was “her horrendous highness, vice-empress of scarecrows and guardian of the throne and yards” and of course “her corn-fed imperial majesty.”

There were rumors of young gay men trying to sneak into the show as duchesses in the early ’60s.

The Corny-ation gowns were often created at the last minute out of everyday objects.  Corny-ation scriptwriter Russell Hill Rogers suggested that the costumes were made by designers “with whatever they could get their hands on.” For the Court of Allergies, the empress’s train was “embellished with coffee cans, carrots, and an allergy cookbook, was bordered with peanuts in the shell, which members of her entourage cracked and ate during the performance.” Pictures of duchesses from the 1953 Court of Cosmetic Subterfuge demonstrate that many outfits were comical and hastily put together out of everyday objects, such as buckets, cardboard, cotton balls, and tinfoil. Edith Speert, the Duchess of Kissproof Lipstick, wore a tinfoil hat that resembled the tip of a lipstick. Nancy Hendrix, the Queen of Mascara, carried a large broom with “Maybelline” written on it. Empress Anne Thompson in 1953 was described in newspaper coverage as wearing “an ensemble of trailing yellow tarleton and cellophane, and her panniered skirt held a built-in dressing table with jars and bottles balanced on top. She applied makeup as she advanced down the aisle.”

Kay Crews as Her Asthmatic Majesty of the Court of Allergies, 1952. Image courtesy the Texana Collection and the Playhouse.

Corny-ation was the brainchild of artistic gay men at the center of the art and theater world in the early 1950s. Although the Corny-ation directors, designers, and duchesses were not exclusively gay men and lesbian women, most designers and directors, along with a few script writers and female duchesses, were. Men involved in traditionally gay occupations such as window dressers and hairdressers designed many of the Corny-ation costumes. They used gay humor or a “campy” style to design the costumes and the show. This campy style was part of growing gay visibility in San Antonio during the Cold War. The show became even more visibly gay in the early 1960s, as a younger group of gay designers began working on the show. There were rumors of young gay men trying to sneak into the show as duchesses in the early ’60s. In 1963 there was a Cornyation drag show out at the Country, a gay bar in the rural area north of San Antonio, that featured men in drag and duchesses from the Fiesta show.

In the early 1960s, Corny-ation was at the height of its popularity, with more than 7,000 people attending the shows each year. According to one former Corny-ation duchess, “In the ’50s, the Cornyation was witty. There was nothing dirty about it. Then as it went on and times changed, too. In the ’60s, we were in the middle of the sexual revolution. And so, it got to be what it is now.”

The designers, duchesses, and scriptwriters were becoming increasingly brazen as the show began to satirize not just the debutante pageantry of the Coronation but also city and national politics more broadly. The satirical turn in Corny-ation began in 1958 with the Court of Outer Space, a pageant that mocked local city elites, along with the Cold War and the House Committee for Un-American Activities. Most of the satire in Corny-ation was focused on city policies and scandals, including private city-council “batroost” sessions and a police sex scandal. Other satires included critiques of how crime was being handled, and city services, including queens of potholes, stoplights, and water services. This often included mocking major high society or important organizations in town, including the Chamber of Commerce (“the Chamberpot of Commerce”), the Cavaliers (“the Chevaliars”), and the San Antonio Conservation Society (“the Consternation Society”).

The costumes and humor became increasingly campy and vulgar, to the delight of audiences and the dismay of the Conservation Society. One of the most controversial performances of the show in the 1960s featured the Empress of the More-The-Marrier of the 1963 Court of Civil and Uncivil Projects. The Empress Mary Byall mocked the Kennedy family’s prolific nature by parading down the Arneson Theatre stairs visibly pregnant and sporting a train with red-headed dolls on it. The scriptwriter described Byall as a “lusty do it yourself beauty/And she’s labored long and hard with a fantastic sense of duty/ She’s against any kind of control/ And those tax deductions will put Uncle Sam in the hole.” Byall broke social rules about pregnant women being visible on the stage and screen, in addition to making witty jokes about contraception and childbirth.

Mary Byall, Empress of the More-The-Marrier of the 1963 Court of Civil and Uncivil Projects. Image courtesy the Texana Collection and The Playhouse.

After attempts to reign in the vulgarity of the show, the Conservation Society disinvited Corny-ation to Night in Old San Antonio a few months before the 1965 Fiesta. After being kicked out of NIOSA for being too vulgar and inappropriate for children, Corny-ation was performed only twice again, in 1965 and 1979. In 1982 it was enthusiastically revived by Ray Chavez and Bob Jolly, two former Corny-ation designers, in the ballroom of the Bonham Exchange, a gay bar in downtown San Antonio. In the 1990s, Cornyation became a fundraiser for nonprofit organizations, with a focus on HIV/AIDS and other health-service organizations. By 2015, which marks the 50th anniversary of Cornyation, the show had donated almost one and a half million dollars to San Antonio charities.

Amy L. Stone is writing a history of Cornyation.

Dear Out In SA readers, We encourage you to take the 9th CMI LGBT Community Survey about your opinions and preferences,...