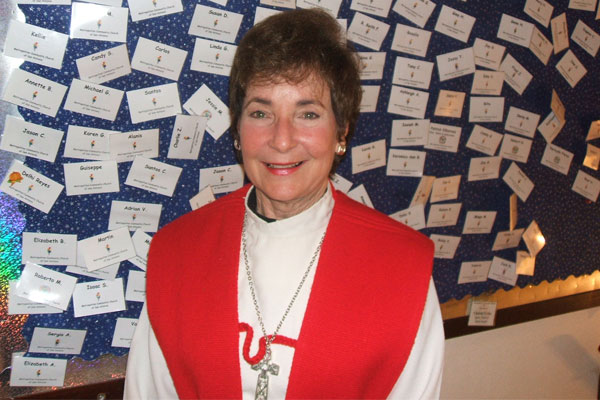 Rev. Ilene Brenner Dunn, former pastor of Madison Square Presbyterian Church in San Antonio and an ally of the LGBTQ community died on Sunday, May 4 surrounded by friends and family.

Most recently, Dunn was a ministerial assistant at St. Andrew’s Presbyterian Church and a pastoral counselor at the Samaritan Counseling Center, both in Austin.

Madison Square has long been an LGBTQ-inclusive congregation dating back to the early 1970’s when Rev. Bill Lytle was pastor. Dunn took up Lytle’s baton. She became a much-respected religious leader in San Antonio’s LGBTQ community, receiving awards from the Human Rights Campaign and the Stonewall Democrats of San Antonio.

As an ally, Dunn could be counted on to be there for the community. She participated in the installation service of Rev. Mick Hinson as then-pastor of the Metropolitan Community Church San Antonio in 2007. When gay activist and Bexar County Democratic Chair, Roberto Flores, died in 2010, Dunn was one of five ministers from different faiths who participated at his funeral mass. 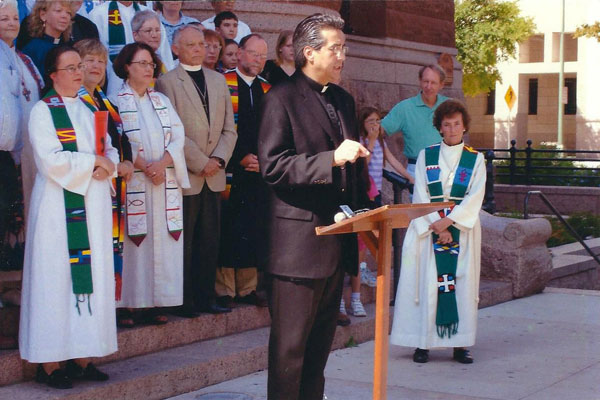 Rev. Ilene Dunn (standing right) at a 2005 San Antonio press conference of local clergy speaking out against Proposition 2 a provision which would have amended the Texas constitution to ban marriage equality. (Photo courtesy Deb Myers)

Dunn achieved a bit of notoriety in the local religious community in 2006 when a complaint against her was filed to the local Mission Presbytery expressing dissatisfaction over her ordination of gay and lesbian church members as elders.

Dunn recalled the decision to ordain gays and lesbians came when a lesbian couple asked why they were welcome to participate in worship and other church activities but could not become elders.

“I took the matter to the session,” she said told the San Antonio Express-News in an interview, “We decided we wanted to be open and inclusive.” Church elders studied the issue for eight weeks and unanimously voted in favor of the ordinations.

The Mission Presbytery deliberated the complaint against Dunn for five months. In June 2007, church officials threw out the complaint.

Dunn told the Express-News she hoped the publicity surrounding her case would open more discussion about prejudice in the Presbyterian Church. “The tragedy is not that we disagree but that we can’t even listen to each other,” she said at the time.

Dunn said her first exposure to the prejudice LGBTQ people face came in 1990 when she was working as a pastoral counselor in Austin. A woman brought in her sobbing teenage daughter and asked Dunn to help “fix” the girl because she was a lesbian and headed for eternal damnation. Dunn admits she knew little about gay issues and felt powerless to help. It was then that she decided to learn more.

Dunn moved to Round Rock, just north of Austin, in 2010 to be near her two daughters and her granddaughters.

At the time of her departure from San Antonio and Madison Square, Dunn reflected, “A lot of people often thank me for welcoming the gay community to the church. However, it is I who is thankful for having been welcomed so warmly.”

A Celebration of Life for Ilene Brenner Dunn will be held at 3:00 p.m. on Saturday, May 11th at First Presbyterian Church, 8001 Mesa Drive in Austin.

"Having a hearing is sometimes a victory," said state Rep. Celia Israel, D-Austin, whose conversion therapy ban was debated for...