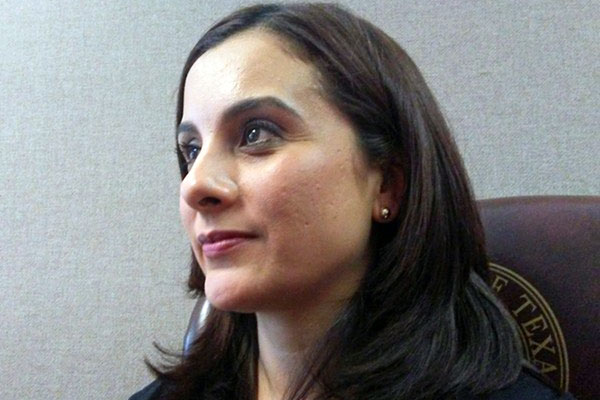 State Rep. Ina Minjarez hesitates before posting a photo on social media of the taco she’s about to eat. Though her Facebook page is personable, and the essence of her personality comes across in her posts, she admits sharing online is hard because she’s an introvert who enjoyed the privacy she had before being catapulted into elected office.

“My staff often tell me, ‘Rep., it’s OK to post that taco that you’re eating. People like that,’” the San Antonio Democrat says.

Clearly, she’s still trying to strike that balance between what she’s comfortable sharing and what she considers her private life.

One-on-one, however, Minjarez shares the story of her life and career with cheerful enthusiasm. The 43-year-old lawmaker and attorney recounts how she hit the ground running after her 2015 special-election victory for the seat vacated by Jose Menendez. She walked into the last 30 days of the 84th legislature, the busiest time of the session.

“You win. You leave your life behind. You get to the Capitol and you figure out where you’re going to stay [during] the busiest time of the session,” she recalls. When she arrived in Austin, she flipped on the lights to find an empty office. “It’s not like [Menendez] left me [with a note that read], ‘Here are some files to help you do your job.’ I had to be proactive and figure it out.”

Part of figuring it out meant getting to know her new Texas House colleagues. She went the extra mile by sitting next to a different representative every morning in the Pink Dome dining room where Minjarez says one can get a mean huevos rancheros plate.

“I have no problem crossing the aisle,” says Minjarez, who pledged to take a bipartisan approach during her campaign. “It’s the only way to be effective and get things done.”

Minjarez remembers the advice of a friend who had worked in the legislature.

“‘You’re setting your reputation as soon as you get there,’ they said. ‘Will you be a hard worker? A woman who commands respect? Or are you going to go to Austin and party?’” Minjarez adds: “You make the choice of who you want to be.”

Her friend’s advice stuck with her. “First impressions are everything,” she says.

“There are older members that are inappropriate,” she says in measured tones. “They have made inappropriate comments. They see how far they can push it. It’s like a high school at the Capitol. Gossip is rampant. Everyone’s competing. People get threatened by successes. There have been staff members that say they don’t understand how I’ve been able to accomplish what I’ve been able to accomplish – that I don’t deserve the recognition.”

Because you’re new? I ask.

“Because I’m new and I’m female,” she replies. “[But] I can either take it and focus and allow it to energize me, or I can grow resentful. I’d rather be productive.”

Minjarez says she’s also seen representatives come into the Texas House “hating everything their rival party members stand for.” She considers this a counter-productive mindset. “Working together is the purpose of government,” the El Paso native says.

As we spend the afternoon in her San Antonio office hopping from her experience at St. Mary’s Law School to her unsuccessful 2000 judicial campaign and back again, she credits her mother with her early trajectory.

“When I was little and I wanted to go outside and play, [my mother] had me watching the Iran-Contra hearings,” she says. “She wanted me to be informed. She told me that I needed to know what’s going on in the world.” Her mother encouraged the development of her voice. “She said, ‘If you see something wrong, you have to say something.’”

Minjarez remembers her first meeting with outgoing House Speaker Joe Straus, a San Antonio Republican. He welcomed her and took the time to find out what her interests were and assured her that, though it was a particularly “crazy time,” she would settle in just fine. Straus also named her to the Transportation and State Affairs committees, the same committees on which her predecessor served. “He’s always given me incredible opportunities, and he never had to do that,” she says.

“I think it’s OK to work across the aisle,” she says. “Maybe I’m one of the few who thinks that now, but I think that’s how you become effective. I think that’s good government.”

Whether she’s on a panel or at the mic, Minjarez also stands by the importance of making a clear and concise argument and getting to the point immediately.

“In a trial, you’re gonna lose a jury’s attention in three or four minutes if you don’t get to the point. It’s the rule of three. What are the three things we want to talk about?” Minjarez compares the culture of the Texas House to the TV show Game of Thrones. “You’ve got to have a strategy.”

Do you think you’re good at the art of governing? I ask.

She thinks that some politicians enjoy hearing the sound of their own amplified voices. She believes this causes more harm than good. “Think about it,” she explains. “If you’re in a room of 149 other representatives, and you want to take that mic every single time the mic’s available [just] because you just want to hear yourself talk, [other representatives] lose respect for you. When you want to make a valid point, they’re not listening to you anymore. And if you get on the mic just to get on the mic, you’re gonna tick ’em off, and they’re gonna vote no on your bill ’cause you ticked them off. You got to know when to be effective and when to shut-up.”

To relax from the stress of Texas politics, Minjarez has a brow-raising guilty pleasure – watching The Real Housewives of Beverly Hills. “I love Lisa Vanderpump.” Minjarez says her husband – Leo Gomez, president and CEO of Brooks on the Southeast Side – wonders how she can “be so serious and then watch that [show].”

“It gives me relief,” she says with a laugh. “I love watching other people’s lives explode. It’s crazy. I love it.”