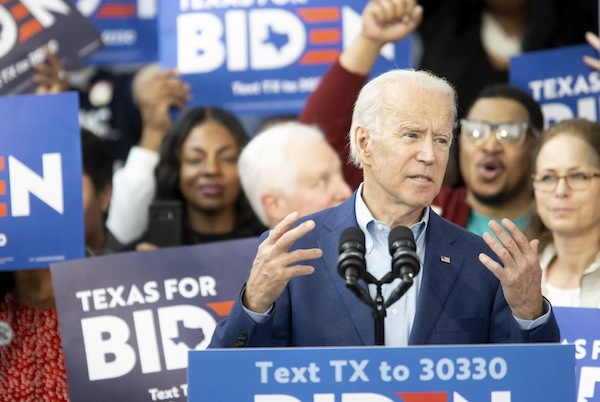 Biden had trailed in the polls leading up to election day, which pointed to Bernie Sanders as the frontrunner.

Former Vice President Joe Biden has won the Texas presidential primary, continuing a stunning revival of his once-struggling campaign that has helped him solidify himself as one of the two leading contenders in the broader race for the Democratic nomination.

Biden was leading or had won 10 states on Super Tuesday, while Sanders looked likely to win four, including California — the biggest prize of the night given its hefty delegate lode. But how the 228 delegates Texas awarded on primary election day will be divvied up remains to be seen.

Biden’s campaign recently surged to life after he nabbed a decisive victory in the South Carolina primary Saturday. Since then, he’s established himself as the leading moderate candidate seeking the nomination.

His momentum, however, didn’t begin until after early voting in Texas concluded. When it started Feb. 18, Biden was tumbling in the polls after humiliating fourth- and fifth-place finishes in Iowa and New Hampshire.

In recent days, Biden also upped his presence in the state with a small Super Tuesday TV ad buy and public events in both Houston and Dallas.

Biden, speaking to jubilant supporters in Los Angeles on Tuesday night, shared credit with his former rivals who backed him.

“We won Minnesota because of Amy Klobuchar. And we’re doing well in Texas because of Beto O’Rourke,” Biden said to a brimming crowd.

The scale of Biden’s lead in Texas puts increased pressure on Bloomberg, who poured millions of dollars into the state and had the biggest ground-game operation by far. Bloomberg had staked his campaign on Super Tuesday, eschewing campaigning in the first four states. And he spent millions in Texas in particular.

NBC News reported late Tuesday that Bloomberg is set to reassess his campaign Wednesday; Warren, meanwhile, appears to be staking her hopes on a brokered convention later this year.

The Massachusetts senator did not appear to receive much of a bump in the state despite having a monthslong head start in building a formal organization here. As of late, she’s also had the support of Julián Castro, the former U.S. housing secretary and San Antonio mayor who dropped his White House bid in January, and his twin brother, U.S. Rep. Joaquin Castro, D-San Antonio.

In a statement, Bloomberg’s campaign manager Kevin Sheekey didn’t concede defeat but emphasized the importance of electing a Democrat who could oust Donald Trump in the fall.

“We launched our campaign exactly 100 days ago. In that incredibly short time, we’ve built a nationwide coalition focused on building a better future for America, and that starts with defeating Donald Trump in November,” Sheekey said.

If candidates don’t cross the 15% needed to collect statewide delegates, they can also pick up delegates by winning 15% of the vote in individual state Senate districts. Total delegate hauls likely won’t be available until Wednesday.

The results in Texas represent at least an interruption of what some members of the party’s establishment had worried was a march to victory by Sanders. During Monday night’s Dallas rally, several of Biden’s Texas supporters, including state Rep. Chris Turner, D-Grand Prairie, said Biden was the Democrat with the best chance of helping Democrats lower down on the ballot.

In the Texas House, Democrats are nine seats away from nabbing the majority. And the Democrats are targeting seven U.S. House seats in November.

“We’ve got some great candidates running,” Turner said of the Democrats vying to unseat Republicans in several competitive state House districts. “But you know who else we need to help us win those nine seats? We need Joe. We need Joe Biden.”

Disclosure: The Texas secretary of state has been a financial supporter of The Texas Tribune, a nonprofit, nonpartisan news organization that is funded in part by donations from members, foundations and corporate sponsors. Financial supporters play no role in the Tribune’s journalism. Find a complete list of them here.

Originally published in the San Antonio Current. San Antonians looking to celebrate women will have two opportunities to do so...