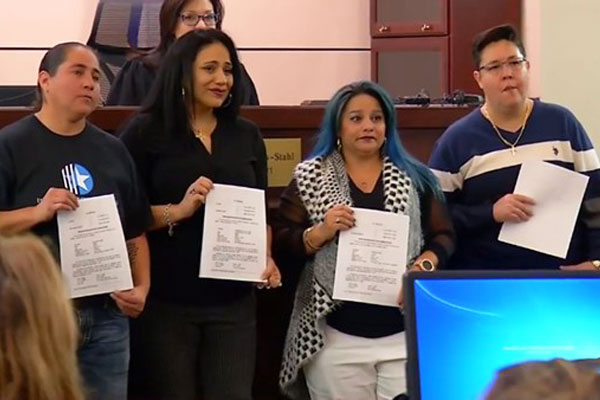 A Bexar County judge on Monday signed papers erasing the criminal histories of four women wrongly convicted in 1994 of sexually assaulting two girls, according to a WOAI-TV report.

Elizabeth Ramirez, Kristie Mayhugh, Cassandra Rivera, and Anna Vasquez — known as the “San Antonio Four” during coverage of their high-profile case — were wrongly convicted of gang-raping Ramirez’s nieces, then 7 and 9 years-of-age. The women had recently come out as lesbians, which prosecutors seized on as a motive.

Ultimately, they served 15 years in prison.

All along, however, the women maintained their innocence. Their case reached national attention thanks to the work of the Innocence Project, which fought for their release, and an award-winning documentary called Southwest of Salem.

While the Texas Court of Criminal Appeals finally dismissed the case in 2016, the convictions remained on the women’s records until now. Felony convictions, even when overturned, make it difficult for people to find employment and resume day-to-day life.

“An exoneration is like the surgery to correct the main problem, but you still have scars from it,” Allison Clayton, deputy director for the Innocence Project of Texas, told WOAI. “The expunction gets rid of the scars.”

Equality Texas is spreading the word to the LGBT community that the Affordable Care Act (ACA) is still the law...