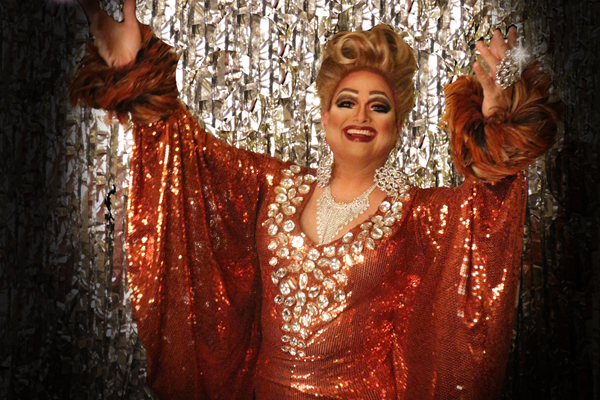 A drag queen and a gay club owner raise their son then face a crisis when the boy grows into a young man who wants to marry into a conservative politician’s family. It could be a story out of today’s headlines. However, it’s the basic plot line of the 32-year-old musical, La Cage Aux Folles, that opens on April 3 at the Woodlawn Theater.

La Cage Aux Folles premiered on Broadway in 1983 during the early years of the AIDS epidemic when homophobia was at its most intense. However, with its book by Harvey Fierstein, who wrote the drag queen drama Torch Song Trilogy, and music by Jerry Herman, who composed the music and lyrics for Hello Dolly! and Mame, the show became a hit. It received nine Tony Award nominations and won six, including Best Musical, Best Score and Best Book.

The original French play by Jean Poiret and the musical served as templates for the 1996 hit movie, The Bird Cage, directed by Mike Nichols and starring Robin Williams and Nathan Lane.

Now, over 30 years after its New York opening, the Woodlawn Theater in San Antonio is staging La Cage with the theater’s artistic director Greg Hinojosa in the lead role of Albin, a drag queen who performs in her “husband” Georges’ club under the name Zaza.

The show is being directed by Tim Hedgepeth, a professor at Northwest Vista College, who also directed Gypsy at The Playhouse and Private Lives at the Classic Theatre.

Hinojosa was last seen onstage at the Woodlawn playing Max Bialystock, the lead character in the Mel Brooks musical, The Producers. “When we first added La Cage to our season, I considered directing it and was looking for actors to play Albin. The more I read the script I thought to myself, this is a fun role. It might be kind of challenging for me,” he says.

The biggest challenge for Hinojosa has been to keep Albin from being a stereotype.

“I don’t want him to be a flamboyant, over the top screaming queen for many reasons. I really wanted to find something to humanize him. I wanted to showcase the relationship that Albin and Georges have. They’ve been together for 20 years and just like any couple they have their ups and downs. They have good times, they have bad times. The thing that has sustained them for those 20 years is their love for each other,” he explains.

Dwayne Green, an actor who’s appeared in many productions locally, but who’s not been on stage in over 15 years, is playing the part of Georges. “He has a wonderful baritone voice and he’s very charming and very endearing and I think we have wonderful chemistry together,” says Hinojosa.

Rick Sanchez, who just directed The Addams Family at the Woodlawn and played the emcee in Cabaret at The Cameo Theater and the Allegro Stage Company, plays Jacob, Georges and Albin’s “maid.” The chorus line, known as The Cagelles, will be portrayed by both male and female dancers.

Hinojosa says that while La Cage’s plot may be a bit dated, it “couldn’t be more relevant with everything that’s happening in the LGBT movement today.”

During the run of La Cage, the San Antonio AIDS Foundation will have an information table in the lobby of the theater and will be collecting donations before every performance.

On April 22, the sixteenth annual Fiesta Frenzy will be held at the Woodlawn Theater. This year’s theme is An Evening at La Cage. Besides local performers, the cast of La Cage Aux Folles will perform numbers from the show. A portion of the show’s proceeds will benefit the Bexar County Child Protective Services Children’s Room at the Bexar County Courthouse. Audience members are  encouraged to bring a toy or stuffed animal which they can exchange for a raffle ticket to win a pair of tickets to a show at the Woodlawn. Fiesta Frenzy tickets are available online at WoodlawnTheatre.org/tickets.

On April 18 and April 25, the Woodlawn Theatre will host a High Heels Lip Sync 4 Your Life Contest. Arrive at the theatre 20 minutes prior to the start of the show to compete.

La Cage Aux Folles at the Woodlawn Theater. Weekends April 3 to May 3. Tickets available at WoodlawnTheatre.org or by calling the box office at 210-267-8388. Group discounts available.

The relationship between the queer community and gentrification can be slippery to define, in part because the latter term is...