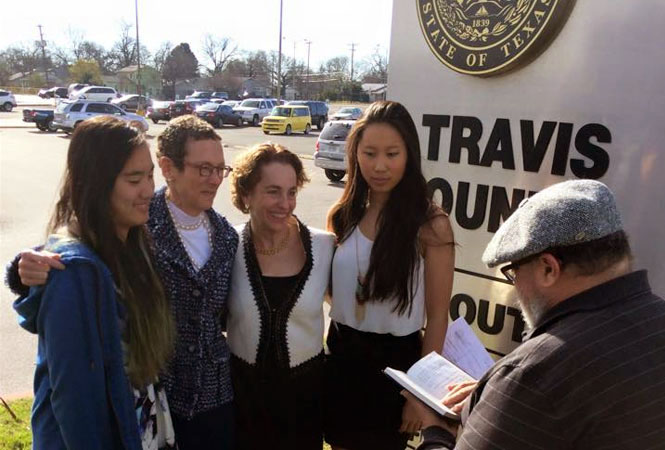 The Austin American Statesman reports that a lesbian couple in Austin got married this morning after a state district judge ordered the Travis County clerk to issue the women a marriage license. The couple was married by a rabbi in front of the county clerk’s office.

This first same-sex wedding in Texas was made possible after Travis County Probate Judge Guy Herman ruled this week that the state’s ban on marriage equality is unconstitutional.

Judge Herman’s ruling was issued as part an estate fight in which an Austin woman sought to have her 8-year relationship deemed a common-law marriage after the death of her lesbian partner.

Shortly after Herman’s ruling, American-Statesman reporter Chuck Lindell had tweeted: “Travis County will NOT issue same-sex marriage licenses today. Clerk says she is scrambling to meet with lawyers, but no for now.”

On Wednesday, state attorney general Ken Paxton asked the Texas Supreme Court to issue an emergency order blocking Herman’s ruling. “The probate judge’s misguided ruling does not change Texas law or allow the issuance of a marriage license to anyone other than one man and one woman,” Paxton said in a statement.

According to the Washington Post, Paxton “also said he was seeking to void the marriage license issued to Goodfriend and Bryant on Thursday morning and said he was also filing a suit to stop the Travis County clerk from issuing any other same-sex marriage licenses.”

Joey Palacios of Texas Public Radio reported that the Travis County Clerk’s office told him “it is only issuing a license to that couple by court order. No other same-sex couples will be served.”

In a post on Facebook, Congressman Lloyd Doggett, whose district includes parts of Austin, wrote, “Congratulations to my friends Sarah Goodfriend and Suzanne Bryant on today becoming the first same-sex couple to be married in the State of Texas!”

Chuck Smith, executive director of Equality Texas said in a statemet, “While we join with Sarah, Suzanne, and their children in celebration of their wedding, we recognize that other couples are still denied the freedom to marry the person they love. We urge the 5th Circuit Court of Appeals to quickly issue a ruling affirming the freedom to marry for all loving couples in Texas.”

“It’s very exciting. My little one was worried about missing her history class. I said we’ll be making history,” Bryant told the American Statesman.

Late in the afternoon, the Texas Supreme court granted Paxton’s requests to stay the two court rulings that led to this morning’s wedding. “The same-sex marriage license issued by the Travis County Clerk is void, just as any license issued in violation of state law would be. I will continue to defend the will of the people of Texas, who have defined marriage as between one man and one woman, against any judicial activism or overreach,” Paxton said.

Governor Abbott released the following statement in response to Judge Herman’s ruling: “Article 1, Section 32 of the Texas Constitution defines marriage as consisting ‘only of the union of one man and one woman’ and was approved by more than three-quarters of Texas voters. I am committed to ensuring that the Texas Constitution is upheld and that the rule of law is maintained in the State of Texas.”

On Saturday, February 21, media outlets were reporting that Paxton had asked the state Supreme Court to declare the couple’s license invalid.

In his petition to the court Paxton insisted, “The state of the law in Texas has been needlessly cast into doubt. Relief from this Court is necessary to avoid the legal chaos that would follow if the trial court’s ruling is mistakenly interpreted as authorization for the creation or recognition of same-sex marriages in Travis County or throughout the State.”

“The rogue actions of Travis County judges do not withstand the scrutiny of law. The same-sex marriage license issued yesterday is not valid because it conflicts with the Texas Constitution and State law — the license is therefore void ab initio,” Paxton later said in a statement.

Out in SA will continue to update this story as it develops.

There’s something terribly wrong with the way we report and respond to LGBT hate crimes in this country. Maybe the...