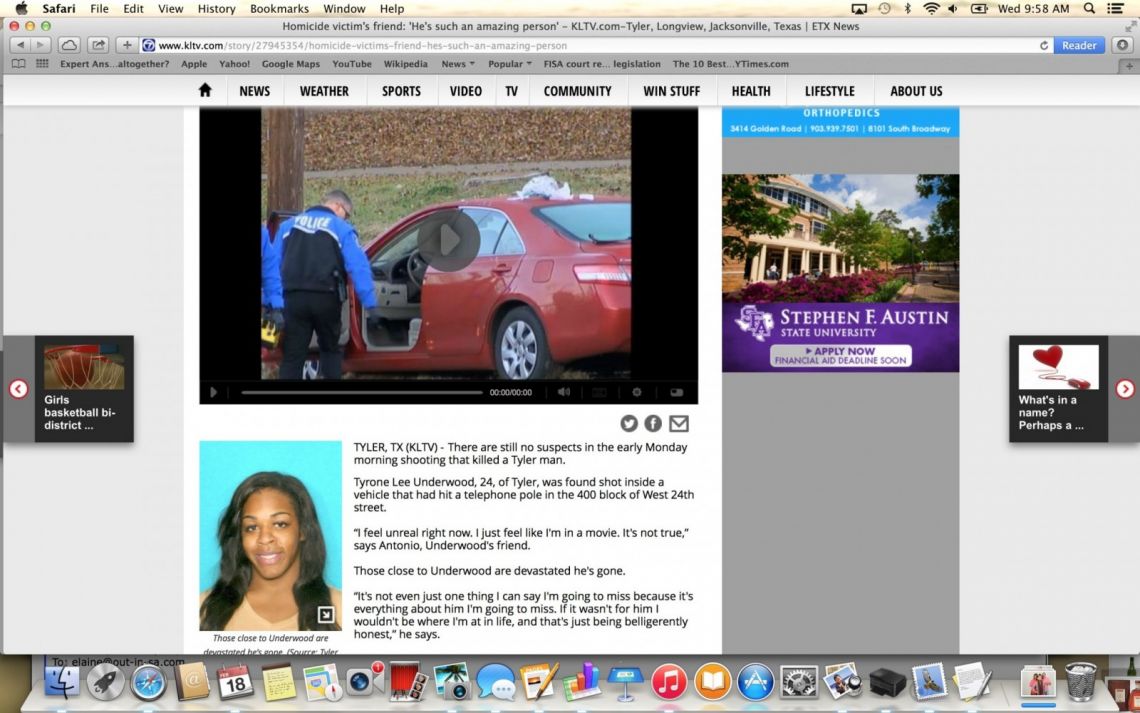 Ty Underwood is one of several transgender women murdered in the first weeks of 2015. She was identified as a man in initial news reports.

There’s something terribly wrong with the way we report and respond to LGBT hate crimes in this country. Maybe the fight for marriage equality has distracted us from the fact that in an overwhelming majority of the U.S., the struggle to simply be a lesbian, gay, bisexual, or trans individual trumps the struggle to marry one.

We’ve become desensitized to the continuous violence members of our community are subjected to. We’ve begun to accept hatred and bigotry, bodily harm and bullying as the price we pay for being out. That has to stop.

In just the first 44 days of 2015, seven trans women were murdered in the U.S. These deaths were violent, in many cases premeditated, and yet none of them have received the kind of national media attention they deserve.

Twenty-two-year-old Bri Golec, a white trans woman in Akron, Ohio, was stabbed to death in her home at approximately 10 p.m. on the evening of February 13. Kevin Golec, the victim’s father, reportedly called 911 and claimed his home had been burgled. Police have found no evidence of that to be true, and he has since been arrested and charged with her murder. In local media reports, Bri was mistakenly identified as male.

Penny Proud, a 21-year-old black trans woman from New Orleans, Louisiana, was shot several times early on the morning of February 10. The situation surrounding her death remains unclear, though police suspect she may have been the victim of a robbery. Again, police and media reports initially misidentified Proud as a black man. So far, no arrests have been made.

A Latino woman was found stabbed to death in a stairwell in San Francisco’s Bayview District  February 1. She was later identified as 36-year-old Taja Gabrielle de Jesus, a known trans advocate. Witnesses describe her attacker as a 6-foot-1 black man wearing a black jacket. Anyone with information is urged to call SFPD at (415) 575-4444.

Yazmin Vash Payne, a 33-year-old black trans woman, was stabbed to death in her Van Nuys, California, apartment January 31. Firefighters discovered her body while extinguishing a fire set in her apartment by her boyfriend. The suspect, Ezekiel Dear, later surrendered to authorities and confessed. He is being charged with murder and arson.

On January 26 in Tyler, Texas, Ty Underwood, 24, was shot and later found in her vehicle, which had subsequently crashed. Police have arrested 21-year-old Carlton Ray Champion, Jr., whom they believe was in a “brief relationship” with Underwood. According to reports, electronic evidence shows Champion was to meet Underwood at the time of the murder. Champion also faces unrelated probation violations. Prior to the arrest of her alleged murderer, Underwood was identified as a black man in local reports.

Early on the morning of January 17, 30-year-old Lamia Beard of Norfolk, Virginia, was shot to death. Police are investigating whether her death is related to another, non-fatal shooting of a man nearby. Beard, too, was mistakenly identified as a black male in area reports of her death. No arrests have been made.

On January 9 in a motel in Louisville, Kentucky, police discovered the body of a black trans woman in her twenties who had been shot once in the chest. Her death was the first in 2015 in which local media misidentified her gender and used her birth name, Sherman Edwards. In some reports, Edwards is identified as a gay black man. Henry Richard Gleaves II is wanted in connection with her death, though authorities have not released details about how the two might have known each other.

These seven deaths don’t just affect the trans community. Though sexual orientation and gender identity are not related, they are often the motives for violent crime. Of the 45 states that have hate-crime laws, only 31 include gay and lesbian protections, and only half of those (about 16 states) have hate-crime laws that specifically address transgenderism.

If we’re going to take a fight for equality to the Supreme Court, let’s pick the right fight. Let’s pick the one where lives matter. It’s been 40 days since the first murder. Why is there no active manhunt for the three unknown subjects? Where is the public outcry for justice here? Where is the “translivesmatter” hashtag? Why is it acceptable to us that these things play out in their own time with no community involvement? We’re gridlocked with the far right in a battle to make them realize that we deserve to live like them, but we haven’t yet convinced everyone that we deserve to live period.

The Department of Housing and Urban Development (HUD) has played a leading role in administering the Fair Housing Act which...