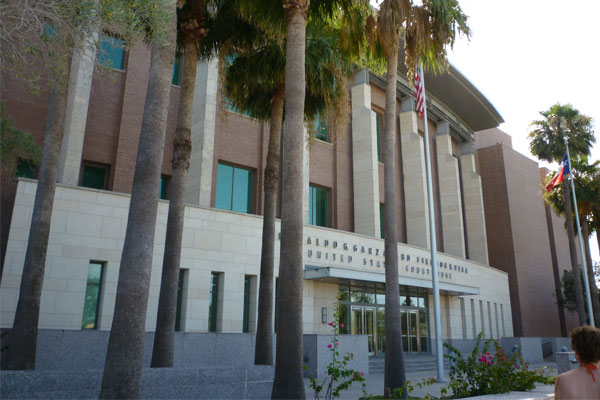 LGBT activists organized by Aquí Estamos will march on the Brownsville Federal Courthouse on April 17.

A group of LGBT activists from Texas’ Rio Grande Valley are planning to march on April 17 through downtown Brownsville to the Federal Courthouse “to stand firmly against all legislative attacks currently being waged against the trans and queer communities throughout the South.” Participants say the march, which is being organized by Aquí Estamos, will serve as a reminder to Texas lawmakers that they must “represent the well-being of all their constituents, particularly those who have historically been marginalized by hateful state policies like the recent laws being passed in North Carolina, Mississippi and Tennessee. We will also send a message to our own lawmakers in Texas and let them know that the queer and trans people of Texas will not tolerate any attempts to pass similar laws in our state.”

Equality Texas has predicted that a record number of anti-LGBT bills will be filed in the upcoming 2017 Legislative Session.

Aquí Estamos reps, Dani Marrero Hi and Erika Galindo, say the community needs to start pressuring politicians. “Texas is home to officials who have been eager to hasten the disenfranchisement of our communities, and so we hope to take a preemptive stance and let these lawmakers and our own governor know that we will resist and protest should any attempts to pass anti-LGBTQ laws are made.”

The protest march is on April 17 at 4 p.m. The route begins at the Alice Wilson Hope Park, 1300 E Levee Street in Brownsville and ends in front of the Federal Courthouse at 600 E Harrison Street.

“Our larger mission is to support physical activity and build community through fun outdoor activities among LGBT youth.” In the...