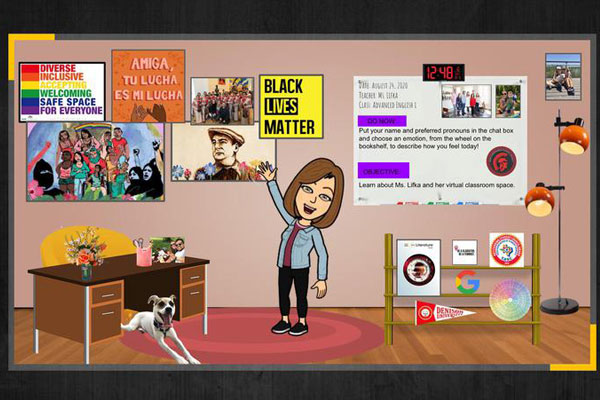 School officials said parents complained about the posters. Taylor Lifka was allowed to return Tuesday, but she said she is not prepared to come back until the school commits to more inclusive policies.

By Stacy Fernández, The Texas Tribune

Unable to meet with her students in person because of the pandemic, Taylor Lifka, an advanced English teacher at Roma High School, set out to personalize and add warmth to her virtual classroom space.

She displayed a collage of posters, just like the ones in her real classroom: One read “Black Lives Matter,” another included a rainbow flag and a third had a phrase written in Spanish that highlights solidarity between Black and brown people. On the digital chalk board, she asked students to put their names and preferred pronouns in the chat box. Then, she posted a screenshot of her classroom on her social media.

On Sunday, one day before she was supposed to welcome her students back virtually for the first day of class, a school official told her to take down the signs. She refused. A few hours later, she was placed on paid leave.

“My assistant principal told me, ‘Please take the posters down.’ I guess once that happened, I knew that it might be a rocky road, but considering being put on leave? I never really thought that that was going to be their first step,” she said in an interview with The Texas Tribune.

Roma school officials said that several parents and community members filed complaints to the district about the Black Lives Matter and LGBTQ posters. Lifka was told she could return Tuesday and would be allowed to retain the posters as long as they did “not come to overly disrupt or detract from the educational process or the learning environment.”

“This action was not intended to reflect any form of punishment or admonishment towards Ms. Lifka but was purely driven by a need to review the circumstances and come to a sound resolution for all persons involved,” the Roma Independent School District said in a statement Wednesday.

The English teacher said she won’t return until the district commits to tangible change and supporting “anti-racist policies and tolerance in our classrooms.” Lifka specifically asked the district to provide additional training and clarify guidance for staff regarding inclusion.

“If I just reenter the classroom without any further discussion or action of how is this going to change in our community, then what was all this for?” Lifka said. 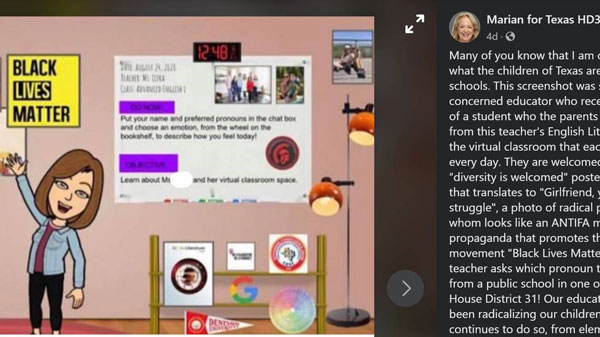 Original post by Republican candidate Marian Knowlton has been deleted.

Lifka said “this all sort of exploded” after a screenshot of the picture she posted on her personal social media account was shared in pro-President Donald Trump Facebook groups and amplified by Marian Knowlton, a Republican running for the District 31 state House seat. 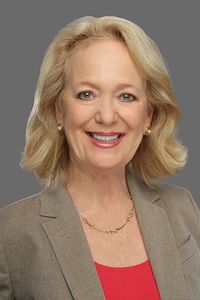 In a since-deleted Facebook post, Knowlton said the education system was “radicalizing” students and referred to the posters as an example of “leftist indoctrination.” In a separate statement Wednesday morning, Knowlton said she deleted her original post about the virtual classroom — which she said had more than 10,000 comments — after getting harassed online.

Thousands of parents, students and community members have expressed outrage at the school district for punishing Lifka. An online petition asking for Lifka’s reinstatement amassed more than 30,000 signatures as of Thursday afternoon.

“Even though [the district] stated that it’s not a reprimand … depriving a teacher of teaching — their actual job — I think that’s a reprimand in itself,” said Andrik Garcia, a senior at Roma High School who took Lifka’s English class last year.

The Roma High School Student Council, which Lifka advises, released a public statement Tuesday calling her suspension “unjust.” The group said teachers shouldn’t be punished for creating a safe and inclusive environment for students and said it’s not a political statement to stand against sexism, homophobia and racism.

“This is not bias. It’s equality,” the statement reads.

Lifka said the support she’s received has been encouraging.

Here’s How to Vote by Mail in Texas

Your questions answered about who qualifies, when to expect your ballot and how to make sure your vote counts. By...