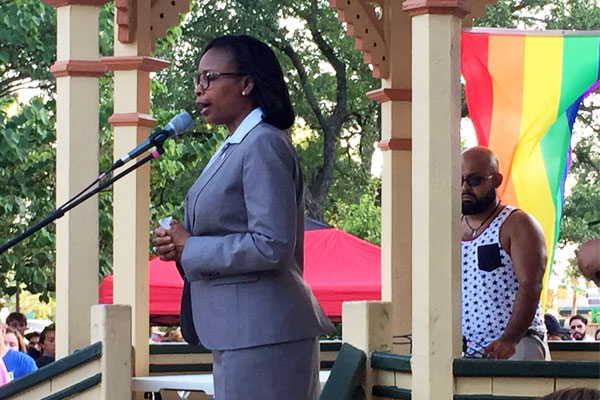 Mayor Ivy Taylor was heckled by protestors while trying to give the opening prayer at the vigil for the Orlando shooting victims. (Photos by Sam Sanchez)

San Antonio Mayor Ivy R. Taylor was jeered by about a dozen protestors while she gave the opening prayer at a June 16 vigil in Crockett Park for the victims of the Orlando shootings.

The screams of “Shame on you Ivy” and “You’re part of the hurt Ivy” as well as other insults drowned out the mayor’s prayer during what was an otherwise peaceful and moving vigil commemorating those who died in Orlando. Protest signs went up and the shouting began as soon as the mayor began to speak. It continued through her entire presentation.

A peaceful protest had been previously announced where several individuals said they were going to turn their backs on the mayor while she spoke. Those who jeered her were not part of that group and their shouts overshadowed the original intent of the other planned protest.

A couple of people tried to engage the protestors and arguments ensued, all of which added to the noise level which made the mayor’s comments difficult to hear. Media reports indicate the mayor was expecting a backlash. According to the San Antonio Express-News, “Leslie Garza, the mayor’s director of communications, said the mayor will be attending the vigil because ‘she believes wholeheartedly that this is not about politics, but this is about prayer.'”

The mayor’s prayer was thoughtful and compassionate even if it did not specifically mention the LGBT community.

I am here with you to pray as we mark the loss of so many innocent people. I believe in the amazing power of prayer and that we are one San Antonio, a city that rejects the hate and heinous acts in Orlando.

So I ask that you would please bow with me in prayer.

Lord we come before you this evening asking for your spirit of healing to come across the land. Lord we pray that your spirit would be in the midst with us here this evening. Lord I ask that you would remind us of the words in Romans 12: 14 to 16. “Bless those who persecute you. Bless and do not curse. Rejoice with those who rejoice. Mourn with those who mourn and live in harmony with one another.”

Lord may those words be implanted in our hearts and minds as we struggle with the grief. I pray right now for the families that were directly impacted and affected in Orlando. God I pray that you would touch the hearts of all that are gathered here tonight who are grieving. And Lord, I pray for a spirit of unity here in San Antonio. And Lord, I also ask that you would direct each and every one of us to not just pray but to take action because I know that your word says that faith without works is dead. So Lord, take action to prevent these types of things from happening ever again in San Antonio or anywhere else in these United States. And Lord I ask that you would bless the rest of this vigil. In Jesus name I pray. Amen

Once the mayor finished the prayer, she was whisked out of the event by her security detail.

Some of the community organizations that participated were the Sakib Shaikh Muslim Children’s Education & Community Center, Dignity San Antonio, the Raindrop Turkish House and the National Diversity Council.

There was also music, reflections and a reading of the names of the 49 who died at the Pulse dance club on the night of the tragedy. An estimated 750 people attended the vigil which was organized by Pride Center San Antonio. In his comments, District 1 City Councilman Roberto Carlos Trevino said, “The fact that so many diverse people and organizations convened here tonight to honor the victims of the Orlando shootings is a positive sign that San Antonio is not a place of intolerance but a place of love and acceptance . . .  I believe in embracing the LGBT community and bringing them into the mainstream of our city’s life. In that way we make San Antonio stronger and less hospitable to the bigoted.”

Some Not Happy With Taylor’s Appearance at Orlando Vigil

News that Mayor Ivy R. Taylor will be speaking at a vigil for victims of the Orlando shootings has not...