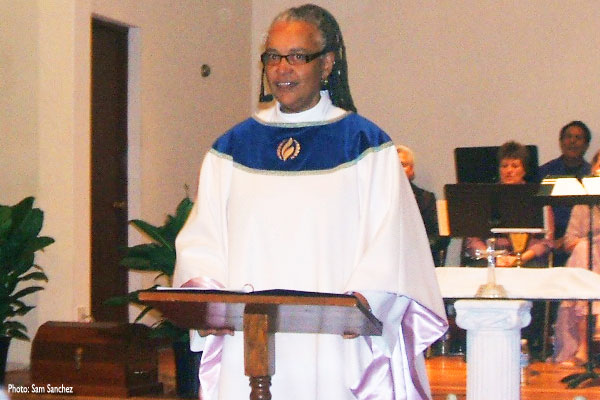 In a December 11 Facebook post, the Rev. William of H. Knight, pastor of MCC SA, published the text of his letter of resignation which he addressed to the governing board of UFMCC, the Council of Elders and the senior leadership team. In it, he cites the removal of Rev. Elder Darlene C. Garner, who has served as an elder for UFMCC since 1993, as his reason for leaving the board. “After much prayer, meditation and listening in the silence, I must offer my resignation as a Member of the Governing Board of UFMCC . . . When I voiced my concern about . . .  the potential impact of removing the only Denominational Office headed by a Person of Color and a Woman of African Descent, the response was that personnel matters did not require Governing Board approval,” Rev. Knight said in his letter.

According to a report by Robin Tyler in the Los Angeles Blade, two other board members resigned as well.

“MCC called it ‘restructuring.’ But that usually means shifting people around, not eliminating them without warning or seeking possible alternatives. Instead, Darlene was told ‘goodbye’ with no warning, no severance, and no unemployment compensation from MCC,” the Blade added.

The website Believe Out Loud reports that on August 23, 2017, Rev. Elder Rachelle Brown, the interim moderator of UFMCC, informed Rev. Garner that she would be placed on sabbatical until the end of the year, and her employment with MCC would end on December 31. Garner was not planning to retire until December 2018.

Since 1988, Rev. Garner has served as pastor of MCC congregations in Baltimore and Northern Virginia, and as an interim pastor in Cape Town, South Africa. According to the UFMCC website, she has served as director of the MCC Office of Emerging Ministries, which provides global leadership for the development of new congregations. She has also worked with MCC churches in Asia, Australia, Europe, and New Zealand.

According to Rev. Knight, UFMCC’s restructuring plan eliminated Rev. Garner’s Office of Emerging Ministries and replaced it with a new Office of International Diversity and Inclusion which will be headed by an associate director.

“When questions were raised concerning whether Rev. Elder Darlene Garner was being fired, the response was that she was retiring, this, in spite of the fact that a separation letter was offered to Rev. Garner which she did not agree to or accept,” Rev. Knight wrote. “In this instance there seems little substantive difference between being fired and a forced retirement.”

In a open letter to the UFMCC published on December 14 by Believe Out Loud, over 50 clergy from various denominations wrote, “As LGBTQ activists, we are indebted to the denomination for profound work over the years. It is, therefore, with heavy hearts that we write with deep concern about recent restructuring decisions that have led to the firing of Rev. Elder Darlene Garner.”

“When the nature of my conflict with my colleagues is based upon personal preference, I am willing to join a majority opinion with which I disagree,” Rev. Knight told the UFMCC board. “I am, however, unwilling to be bound by a majority that does not reflect my commitment to raise my voice in the face of injustice, unfairness and what appears to be a personal vendetta against Rev. Elder Darlene Garner.”

The controversy stirred by Rev. Garner’s dismissal apparently caused the UFMCC to reconsider its decision and come to a settlement which now allows her to remain with the denomination until January 2018.

“At this time, all concerns regarding her role on denominational staff are mutually resolved between Rev. Elder Garner and MCC,” the UFMCC wrote in the January 21 issue of their Headline News publication. “We invite and encourage you to pray God’s blessings upon Rev. Elder Darlene Garner as she embraces her future with gratitude for her past and great excitement and hope for all that is to come.”

In a January 19 announcement, the board of directors of Fiesta Cornyation named Charlie Biedenharn as this year's King Anchovy...