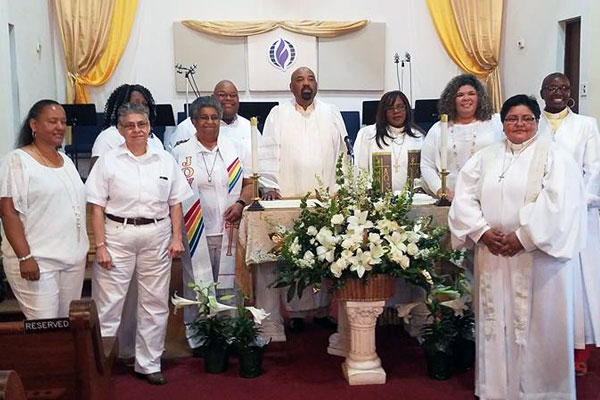 The Metropolitan Community Church of San Antonio welcomed its new pastor, the Rev. Doctor William H. Knight, who presided at his first Sunday service at the church on April 16.

MCC has been without a permanent pastor since January 2016 when the Rev. Mick Hinson announced he was leaving the church after leading it for eight years in order to work in hospice care. Rev. Doctor William H. Knight during his time as a pastor in Hawaii. (Courtesy photo)

Rev. Knight will be MCC’s fifth pastor in the church’s 36-year history. He comes to San Antonio from Pahoa, Hawaii where he was pastor of the Open Arms MCC. His resume cites previous postings at MCC churches in San Francisco, San Jose and Tucson. He was ordained in 1995 at the Universal Foundation for Better Living in Los Angeles. In 2005, he earned a Doctor of Divinity degree from the University of Sedona.

Knight became a minister after a long career in show business which started at Cleveland’s famed Karamu House when he was seven-years-old. His entertainment work continued through his adult years as a director and appearances in stage plays and television shows, including roles on the Fresh Prince of Bel Air, Sisters, Murder She Wrote, and L.A. Law among many others. He is a graduate of California State University at Hayward where he received a Bachelor of Arts in speech and drama.

The reverend says his transition from the world of entertainment to a vocation in the ministry first took root when he attended a study session at the home singer and actress Della Resse. It is there where Knight says he was “exposed to an approach to spirituality that touched something deep within and led me to desire and seek more of this practical knowledge.” That first meeting with Reese went on to become a working relationship that endured for over 23 years.

Knight says the road to the pulpit was not one he initially chose for himself. “I fought kicking and screaming. My experience had been that it was not anything I was remotely interested in doing,” he told Out In SA. “This is something for holy people, this is something for people who are good. This is for saints and I am not a saintly person,” he says he told himself.

It was during one of his prayer sessions that Knight says he grasped what he needed to do. “I came to the realization that this was not about my fears but about a calling from God and I gave up my resistance.”

When asked about the particular challenges of being the pastor of an LGBT congregation, Knight replied, “In the MCC churches around the world we draw people from every conceivable background — people who’ve been thrown out of cathedrals, people who were once part of Pentecostal churches, people who were part of high church rituals, and some who participated in spirited worship services. Our challenge is to craft an experience that is relevant to all of those backgrounds.”

Knight says one of his goals for MCC SA is to reach out to those in the LGBT community who “have been marginalized and separated from the main body of God.”

“I am very passionate about being inclusive and giving everyone an opportunity to know they are not just tolerated or an afterthought but that they are welcomed and celebrated, that their journeys are important, that all are welcome in God’s house,” he says.

The Metropolitan Community Church of San Antonio, 611 E. Myrtle St., invites everyone to Sunday worship services at 10:30 a.m. and on Wednesdays for fellowship at 6:30 p.m. and bible study at 7 p.m.

According to finance reports filed by District 1 City Councilman Roberto C. Treviño, his re-election campaign has received $1000 in...