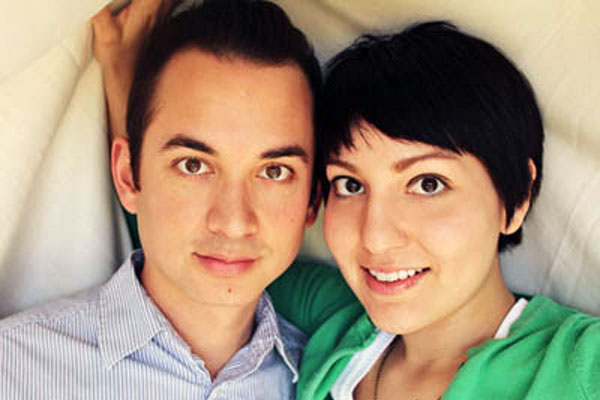 Editor’s note: “Tía Chuck: A Portrait of Chuck Ramirez” is the feature length directorial debut by San Antonio filmmakers Angela and Mark Walley that chronicles the life and work of the late artist Chuck Ramirez.

Gene Elder: Thanks for your great film about Chuck. And have a seat on the green sofa. I know that Chuck is with us. You have made several films that we would like to know more about but lets talk Chuck first. Why did you think you should make a film about Tia Chuck?

Angela Walley: Thanks for having us! We met Chuck and became friends in 2009, about a year before he passed away. He was very kind to us and welcomed us into the art community as young filmmakers who were just starting out. Before he passed away we were in the planning stages of a short documentary about Chuck as part of a series of films we were producing for Glasstire, so the thought of making a film about his work stayed with us after his sudden death from a bicycle accident.

Mark Walley: We learned so much about Chuck and his incredible life after he passed away. His family and friends shared their stories with us and we began the process of digging through photo and video archives. It was surprising how well Chuck had been documented over the years. We found so many video and audio tapes of interviews with Chuck or footage from his art openings in the 90s. The Happy Archives actually supplied the earliest footage of Chuck from an interview you did with him in 1990 at the Human Rights Campaign Fundraiser. We knew we had enough material to produce our first feature length documentary with all the wonderful stories shared with us, Chuck’s own voice from past interviews, and a great archive of photographs and video spanning his entire life.

Gene: Well, of course, it is really important to have filmmakers like yourself to complete an art community and to document our history. As an archivist I know how easily that slips away. You have received a positive response with your film, and Chuck deserves to be remembered. But tell us more about your past films.

Angela: We met our junior year in high school when Mark was working on a short film with mutual friends, so you could say we’ve been working on films together since the very beginning. We began producing films together soon after meeting and that partnership continued and became more focused in college. It wasn’t until after college that we began focusing primarily on documentary filmmaking. We’d discovered the San Antonio contemporary art scene and saw a need for that type of work in the community.

Mark: Our College Art Professor, Karl Frey, really opened the door for us to the art scene downtown and we started meeting artists and began producing short documentaries following artist’s work for Glasstire.com in 2009. That series gave us visibility in the art community and we started working with Blue Star Contemporary, Artpace, Southwest School of Art, and individual artists to produce short documentaries about art. Nearly all of our films have been produced to be watched online and are typically 3-5 minutes. This is the biggest difference between our past work and our film following Chuck, which has a running time of 63 minutes.

Gene: Karl Frey. Now there’s an artist that I have always been curious about. Tell us about him.

Mark: Karl is an amazing artist and educator who has supported and encouraged us since we met over a decade ago. He’s been our teacher, our mentor, our bandmate, and the best man at our wedding! Karl recently had an exhibition at Aanna Reyes Gallery and you can see his work online at KarlFrey.net. Karl’s youngest son Reuben was actually cast in the role of young Chuck Ramirez in a recreation scene for our documentary.

Gene: Interesting. Well, let’s hear about the San Antonio arts community in general for a minute. What do you like about living here and what do you think of San Antonio’s creative community? Good and bad? 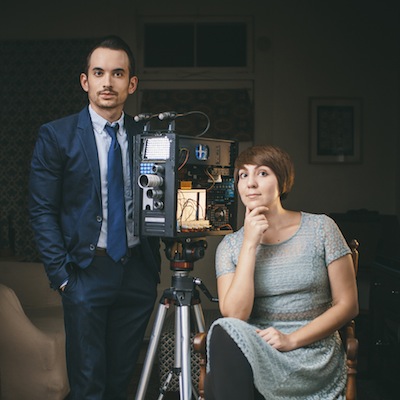 Angela: We feel so fortunate to have been part of the San Antonio arts community since around 2008. So much of our work has been inspired by or in collaboration with visual artists in San Antonio and there is still so much more work to be done! I recently said in another interview that we got to know the whole art scene in a brief period of time and that actually isn’t completely true. We’re still learning so much about our community, it’s history, and all the artists involved. There’s so much more than meets the eye and even after a decade we’re still visiting art spaces we haven’t before and engaging with new communities we hadn’t had the chance to before. Also, there’s always growth and change in the art spaces we have and artists moving into or coming back to San Antonio, so it feels really vibrant and alive.

Gene: Well, enough art for the moment. Lets talk about what is really important. Have you ever seen a UFO?

Mark: Not yet! We did travel to Roswell, New Mexico in 2009 to work on a documentary film following artist Jimmy Kuehnle for the Glasstire series we mentioned previously. His wife Mimi Kato was part of an artist residency program and we spent a few days there filming with Jimmy. While in Roswell we visited the UFO Museum, but that’s our only connection to UFOs and it’s of course through art!

Gene: Jimmy Kuehnle and Mimi Kato? We need to know more about them. Tell us about one art work of Jimmy’s or Mimi that we need to know of.

Angela: It’s hard to pick just one artwork from either artist! They both have amazing portfolios and continue to push the boundaries of their art practice. My favorite artwork of Jimmy’s is “Big Red”, a 16 foot tall inflatable red suit Jimmy wears while engaging a public audience. You have to see it to understand it, so watch our film following that work at this link. My favorite work of Mimi’s is “One Afternoon”, a photo collage created for her 2009 Artpace Window Works exhibition. Mimi creates these incredible narrative landscapes with digital illustration and photography and also portrays all the characters in them. I love both Jimmy and Mimi’s newer works as well, but I have such fond memories of seeing the works I mentioned in person for the first time.

Gene: Big Red is most excellent!! It can be another reason why “San Antonio Is The Big Tomato.” Well back to Chuck Ramirez. Any final thoughts about your film about Chuck? And then I always let my guests ask me the last question.

Angela: We’re so proud of our film and how it shares some history of the San Antonio Contemporary Art scene with a younger generation. Mark and I are in this wonderful space between generations of local artists and we hope to bridge that gap and support the next wave of artists the same way Chuck did. It’s so important that we all collaborate and share our talents in ways that benefit the entire community. We hope that this film is a testament to that kind of generosity of spirit.

Gene: Oh, I have the same thoughts about Chuck, and memories, as everyone.The only thing different is that when we were together it was about gay civil rights, the gay community, history, mainly gay men talk, We respected each other and knew that our talents were best put to work being out gay artists. I respect that about him. He would want that remembered about him. So! Thanks for joining me on the Chartreuse Couch. I know the readers will enjoy knowing more about your film interests.

Gene Elder is a regular contributor to Out In SA and the archivist at the Happy Foundation, San Antonio’s nonprofit LGBTQ archives. Elder welcomes feedback from readers. He can be contacted via email at: [email protected].