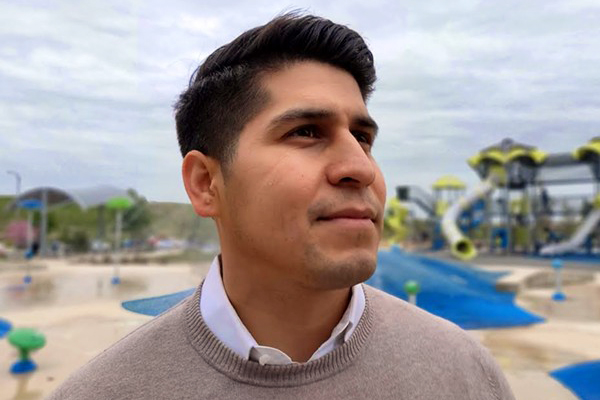 With clear eyes and an effortless smile, San Antonio City Councilman Rey Saldaña is looking back on his eight-year tenure without a single regret. As he approaches his final days in office, his administrative workspace is filled with memories and milestones commemorating his role as the neighborhood-hero-makes-good representative of District 4.

But what stands out most is how his political life has unfolded in public view.
“It’s like the movie Boyhood or something,” he says. “Isn’t that the one where they follow him throughout his entire life?”

Indeed, Saldaña has spent most of his adult life in public office. At 24, he had the distinction of being the youngest person elected to council.

“So, you could keep goin’ with this,” he says, with the charm and confidence that’s marked his political brand.

He shows me a framed photo of the 2011 city council with the same regard one might have reflecting on a high school graduation photo, and there’s a bittersweet pause. Perhaps that’s because Saldaña is the only person in the image who’s still on council.

Now, at 32, he feels the time has come to take a break from the political spotlight. Or as much of a break as his four-month-old son Eli will allow.

As we recall some of Saldaña’s career highlights and he tells me about his upcoming gig with the education nonprofit Raise Your Hand Texas, memories of my 2011 interview with the councilman shuffle to the front of my mind.

It seems like only yesterday that I first sat down with the fresh-faced Stanford grad at Taqueria Mexico on Somerset Road, next to South San High School, where his advocacy on educational issues was preened. Saldaña seems to have maintained the same zest, vigor and enthusiasm that he once had, though now there’s a whisper of maturity in his manner and communication style.

Looking back, Saldaña reflects on some profound advice he once received from former City Councilwoman Elena Guajardo.

Saldaña explains that the practice of staking certain positions simply to get re-elected or putting a “finger in the air and getting a [political] temperature” are the wrong ways to approach the dais. Guajardo advised him to form his positions and cast his votes “because you genuinely believe it’s the right thing to do … and you feel it.”

Saldaña says he’d gladly share this advice with any elected official. And, as a young politician who many expected to run for mayor after Julian Castro’s meteoric rise, he may have more opportunities to do so. Especially since the soon-to-be former councilman has managed to come out of the political maelstrom practically unscathed.

Two weeks later, I meet Saldaña at Pearsall Park, which was once a landfill and now a regional attraction. The project serves as an example of his commitment to long-term investment in an area he calls “the alma of the city.”

“Not soul. But alma,” he says of his district.

Inspired by the beauty of the park that, at one time was only a vision, I ask him if he trusts his decisions.

“Not as much as I want to,” he replies. “The simple answer to that is, ‘Yes, I do,’ but that doesn’t mean I don’t hesitate or I’m not reluctant sometimes.”

He adds that his wife, Jessica, thinks he’s way too trusting.

“I definitely have a strong reliance on the curve of the earth always going towards the good in people,” he says with a chuckle.

Saldaña’s knocked on a lot of doors on the campaign trail, and sometimes he gets invited into people’s homes. Once, a tall man “who looked like Dog the Bounty Hunter” dressed in “a wife-beater T-shirt and a cowboy hat” invited him inside. “He was a bowhunter, which is why he looked like this crazy … wilderness person.”

The man asked Saldaña if he was a politician. An affirmation followed. Then the man asked, “Hey, wanna see something?”

With his worried wife waiting in the car, Saldaña followed the man to his garage.

“And we’re staring at a 10-foot crocodile that he killed,” Saldaña recounts. “My wife was like, ‘You were gone for about 10 or 15 minutes and I was worried,’ and ‘Why did you go?’”

“Yeah, I’m probably way too trusting of people,” he says, erupting with laughter. “Maybe it’ll burn me one of these days, but that was a pretty indicative example of how I always see the good in people [and] the good in circumstances rather than looking at the pit of despair. The guy could have killed me … locked the door behind me … put me up on his wall instead of the crocodile.”

He looks down with a thoughtful, lingering smile.

“I think about it and, yeah, I probably shouldn’t have done that.”