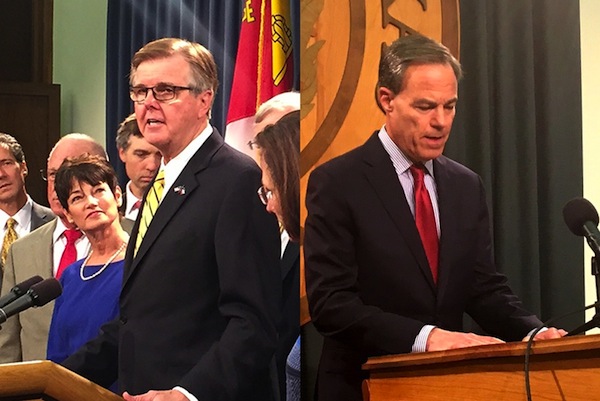 The Texas Legislature appears to be at a stalemate on a “bathroom bill” that could push the legislative session into overtime.

Refusing to go any further to regulate bathroom use for transgender Texans, House Speaker Joe Straus said Friday that the Senate can take or leave a proposed compromise it passed on Sunday — to which Lt. Gov. Dan Patrick later responded with a resounding no.

With the clock ticking on the legislative session, Straus said on Friday that the House will not appoint members to negotiate with the Senate on its proposed compromise on a “bathroom bill.”

“For many of us — and especially for me — this was a compromise,” Straus said at a Friday news conference. “As far as I’m concerned, it was enough. We will go no further. This is the right thing to do in order to protect our economy from billions of dollars in losses and more importantly to protect the safety of some very vulnerable young Texans.”

Patrick called a news conference of his own later Friday to reiterate that he is unwilling to step back from pushing for a measure that would eliminate existing policies that allow transgender Texans to use the bathrooms that match their gender identity and will force a special session, if that’s what it takes.

“He said he has compromised enough, but in fact, he has not compromised at all,” Patrick said.

After months of avoiding a vote on the divisive issue, the House on Sunday amended Senate Bill 2078 with language that would’ve required school districts to provide single-occupancy bathrooms, lockers rooms and changing facilities for students who don’t want to use the ones associated with their “biological sex.” (School groups said the language was open to interpretation and could possibly allow schools to maintain policies that accommodate transgender students beyond single-occupancy facilities with a few tweaks.)

But Patrick — who has spent months championing far-reaching restrictions on bathroom use — had said the amendment’s “ambiguous language” didn’t “appear to do much.” The Senate requested a conference committee on the bill to iron out a deal on the issue, but Straus said that won’t be happening.

“If the Senate wants to pass a ‘bathroom bill,’ it can concur with the bill we passed earlier week,” Straus told reporters during a Friday news conference. “The House has compromised enough on this issue.”

Calling it “absurd” that “‘bathroom bills’ have taken on greater urgency than fixing our school finance system,” Straus said the House is “availing itself” of the same actions the Senate took on school finance legislation by refusing to appoint members to conference committee on legislation originally intended to address the state’s complex, outdated school funding formulas.

For months, transgender individuals residing in Texas have watched lawmakers in Austin squabble over which bathrooms they can use and have been left to wonder whether the Legislature would pull back on local protections meant to protect them from discrimination in public bathrooms and individual accommodations transgender children have obtained at their schools.

The Senate in March passed restrictive legislation that would require people to use facilities in publicly owned building based on “biological sex” — to keep transgender Texans from using bathrooms that match their gender identity — and void local ordinances that regulate bathroom use.

But that measure and a similar House proposal — House Bill 2899 — have languished in the lower chamber.

In threatening to push for legislative overtime, Patrick had deemed bathroom and property tax legislation as must-pass bills. But the House instead acted on narrower measures than those that came out of the Senate.

On Friday, Patrick continued his threat to push for a special session and said the House at a minimum should pass HB 2899, which, he noted, 80 House members had signed on to. Otherwise, he’d continue to hold hostage legislation that would keep some of the state’s agencies from shutting their doors as part of a sunset review process.

“There are two must-pass bills, or I will allow the mistakes of the speaker to put us into a special session,” Patrick said of the House’s tactical error in failing to pass a “sunset safety net” bill ahead of a key legislative deadline.

“Joe Straus is the one causing the special session,” Patrick said. “I’m just allowing it to happen.”

While Patrick is holding onto a significant bargaining chip, only Gov. Greg Abbott can call a special session. Straus’ decision to not appoint conferees to SB 2078 comes after days of Abbott saying he was hopeful for a compromise on property taxes and the “bathroom bill” during the regular legislative session.

Straus on Friday took further action on bathrooms off the table but said the House would consider on Saturday whether to appoint members to a conference committee on Senate Bill 669, onto which the House amended a narrow version of the property tax legislation Patrick was pushing for.

Abbott did not respond to a request for comment from the Tribune on Friday evening, but in a statement given to KXAN News, he demurred on the policy deadlock and instead reiterated that there was still time for a resolution.

“Despite tensions, the session is not yet over,” the statement read. “The taxpayers deserve to have the Legislature finish their work on time. Only the governor can determine when or if there is a special session, and if so, what issues are addressed.”

But Patrick made clear he wouldn’t compromise: “Tonight, I’m making it very clear, governor: I want you to call us back on your time.”

With the mayoral election just two weeks away, one local activist is inviting the LGBT and allied community to participate...