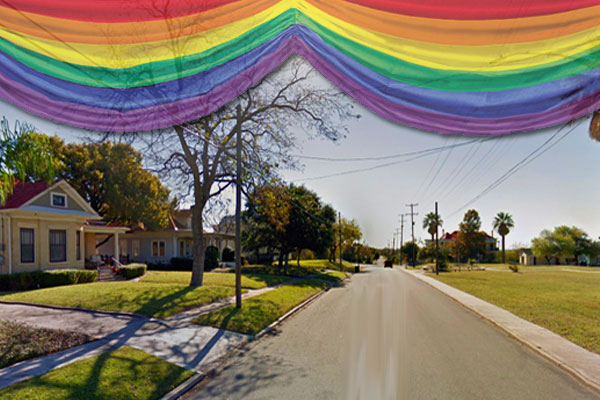 A Gay Pride Flash Mob Dance will be held on Saturday, May 27 in Dignowity Park across the street from the mayor's house.

With the mayoral election just two weeks away, one local activist is inviting the LGBT and allied community to participate in a flash mob dance in Dignowity Park across the street from Mayor Ivy R. Taylor’s house.

The May 27 event is being organized by Rosey Abuabara who says it is meant to be a show of gay pride and a protest against Taylor, who voted against the nondiscrimination ordinance when she was a councilwoman in 2013 and who since then has maintained a distant and icy relationship with her LGBT constituents.

Abuabara says she was inspired to organize the event by a similar ‘queer dance party’ held in January in front of then-Vice President Elect Mike Pence’s home in Washington DC. “I thought we could send a strong message to Ivy Taylor because she is not friendly with the LGBT community,” she says.

Abuabara, who is married to a surgeon, is the mother of three, a girl in high school and twin sons in college, one of whom is gay. Growing up she had two gay brothers both of whom died of AIDS. She told Out In SA her support of the LGBT community comes from the love for her family members who experienced anti-gay discrimination. It was during the battle to pass the nondiscrimination ordinance that Abuabara says she started to actively take an interest in LGBT issues. She began attending city council meetings and says she was “appalled by the hateful things being said by so-called Christians.”

The election of Donald Trump as president has given Abuabara additional impetus to become more active in the community. “Right now, the time is really bad for LGBTs, for Hispanics, for women. I would like to see more people get involved.”

These days, protesting is nothing new for Abuabara. She recently staged a one-woman picket for several days in front of city hall holding a sign that said, “Poison Ivy Must Go!” The solitary protest was prompted by the mayor’s comments that poverty is the result of people not being in touch with their creator. On one of those days, Abuabara was able to personally confront Taylor while she was walking into the building.

“There are a lot of reasons I don’t like her,” Abuabara says of Taylor. “This dance event is a fun way to get under her skin. I’m sure she won’t give us the satisfaction of looking out the window or standing outside to look at us. But you never know.”

Gay Pride Flash Mob Dance, Saturday, May 27, 2017 from 7 p.m. to 7:45 p.m. at Dignowity Park, 701 Nolan St. Dancers are asked to congregate on the east end of the park along North Olive Street between Nolan St. and Burnet St. Come dressed to party. This event will be filmed on Facebook Live and Periscope.

Four years ago, when Mayor Ivy R. Taylor was still the City Councilwoman for District 2, she said her vote...