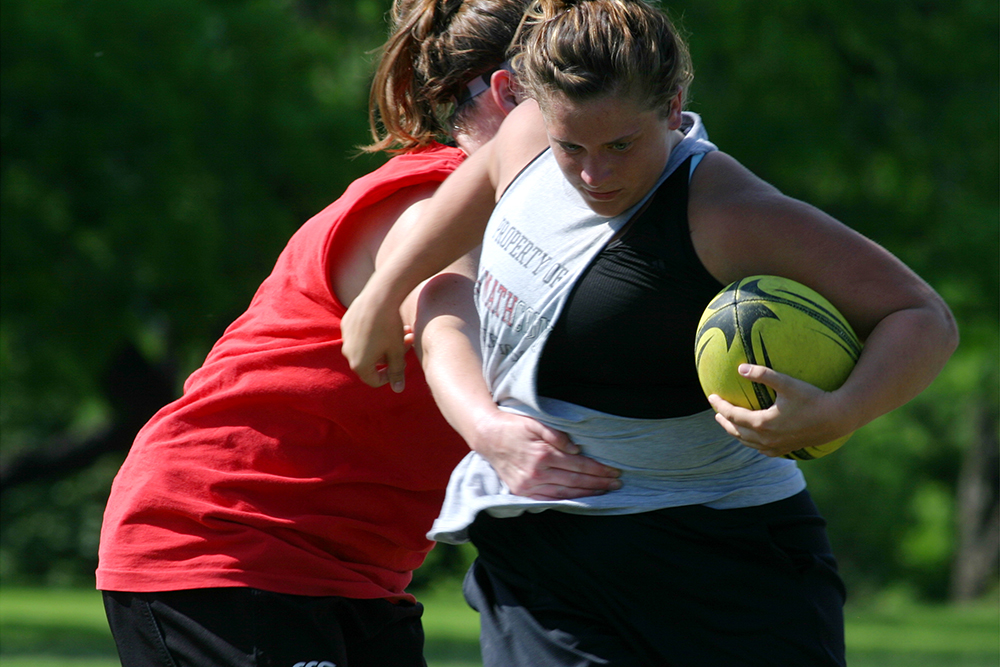 Taylor Wright blasting through a block. Photo by Antonia Padilla.

Women’s rugby was absent from the San Antonio sporting scene for some time, but now it’s back with fresh faces and is stronger than ever. Sundays at 3 p.m., these ladies meet at Olmos Park to ruck, run, pass, and tackle.

While rugby is the fastest growing sport in the United States, it isn’t always easy to keep women’s teams on the pitch. Priscilla Robledo played with two now-defunct San Antonio women’s teams and has been pleasantly surprised with the growth and commitment this time around.

“It’s really hard to keep women’s teams together,” Robledo said. “You have teachers, service members, students, all of these ladies with busy lives trying to make time for a sport they love. We’ve got an amazing group of gals this time around who are committed and really supportive of each other. We started practice with four people who connected on Facebook. Now, without any additional recruiting, we have up to 20 girls meeting up to work out together, run together, and practice every Sunday.”

Rugby isn’t necessarily an easy sell, especially for women. It’s the only sport with identical rules, an identical ball and an identical playing field for men and women, which can be intimidating. Many women think they don’t have the body type to play such a physically demanding sport.

But rugby is unique because every body shape and size brings a unique skill set to the sport. Rugby embraces body positivity in a way that many other sports are unable to do. San Antonio rugger Stephanie Robinson knows this all too well.

“When I started playing rugby five years ago, I weighed 60 pounds more than I do now,” Robinson said. “I never felt like my weight held me back, though, because the position I played required someone my size to plow over opponents. I wasn’t consciously trying to lose weight because my size was an advantage. As I did, though, I kept moving to positions that required more speed and less size. From the beginning, there was always a place for me on the field, and that was awesome.”

You can find (and join!)  the San Antonio Women’s Rugby Football Club, on Facebook: http://www.facebook.com/groups/SAWomensRugby/.