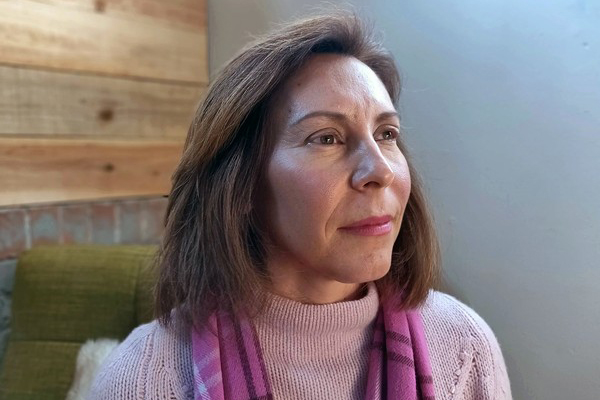 Councilwoman Shirley Gonzales is sipping her cappuccino under a poster for the 2016 San Antonio Film Festival at Shotgun House Coffee Roasters, a little piece of Oslo in the heart of the West Side.

Dressed in a pink sweater and a taffy-colored scarf, she’s a portrait of political accomplishment and reimagined potential. As she prepares her bid for a fourth and final term representing District 5 on council, Gonzales, now 46, is already looking for other opportunities to stay in the world of public service.

“I think that I’d be an excellent mayor for the city, given the wealth of experience that I have,” Gonzales says with visible confidence, adding that she’s “the only businessperson on the council.”

Her time on the dais has been a learning experience, and she admits she only recently accepted that she’s not going to be able to “fix everything that needs to be fixed” in government — something she learned from the late Bexar County Commissioner Paul Elizondo. Even so, Gonzales has demonstrated a talent for focusing her energies on achievements that are within her grasp.

Despite her status as a seasoned member of council, her grand entrance onto the political stage began by accident — while she was on a soul-searching quest.

In 2009, Gonzales had just experienced a divorce and the sudden, cancer-related death of her brother, also her partner in the pawn shop she still owns. With her own mortality in mind, she pondered her greater purpose.

“I thought, ‘If I died, nobody would miss me,’” she says. “‘I haven’t done anything meaningful in this life. I might as well spend my life doing something good.’”

After a move back to the West Side, she decided to focus on making her business “the best pawn shop in the world.” But it didn’t take long for the city’s regulatory hurdles to hold her back from that ambition. She grew frustrated with too many inspection visits and permit requirements. Then, one fateful day, she requested an Infill Development Zone permit.

It was denied, and she was incensed.

That denied permit became a match in the powder barrel for then-District 5 Councilman David Medina’s budding political career. Eager to cut through the red tape, Gonzales announced a run for Medina’s seat in the 2013 election. Not only did she gain the office but also a renewed sense of purpose.

Gonzales attributes some of her political drive to her training for the Ironman Triathlon. From 2008 to 2011, she trained vigorously for the long-distance endurance event, which consists of a 2.4-mile swim, 112-mile bicycle ride and a 26-mile run.

She admits there were times during races when she’d find herself wondering, why she’d purposely put herself in that situation. But she takes pride in knowing that she completed every race she entered.

“And I was never last,” she adds with a smile.

Gonzales has spent time trying to come up with a word that could best describe this age of rediscovery for both herself and her district.

Ultimately, though, it took a Spanish word. She landed on reencuentro.

“It’s more of like an identity,” she explains. “[The idea] that you’ve always been perfect the way you are.”

Her Ironman training also helped prepare her for political life by teaching a critical lesson: don’t take anything personally. The lesson would help her in the aftermath of some heated exchanges, like the time she confronted Councilman Greg Brockhouse at a meeting over comments she found sexist. Political observers agree the moment, captured by news cameras, wasn’t just one of the most uncomfortable interactions of the term but in recent council history.

Gonzales says her political mentor, the late Democratic Party organizer Choco Meza, often asked her, “Do you ever get angry?”

“I would tell her, ‘Choco, this is me — angry,” Gonzales says in a soft and melodious tone. “‘How do you think I got here?’”

À la Pygmalion, Meza advised Gonzales on her campaign wardrobe, taking her away from tight black outfits and encouraging her to wear the pink that’s become her signature color.

“‘Latinas wear bright lipstick,’ she’d say. ‘Here’s a red one and here’s a pink one,’” Gonzales recalls. “‘I want you to wear it every day.’”

I tell her I haven’t thought of Choco in a while.

“I think of her every day,” she adds.

I ask Gonzales how her physical training has influenced the way she thinks.

“First of all, we know that we retain all those emotions and that they manifest themselves into physical problems,” she explains, with a slight lean toward me. “We know that anger, frustration and disappointment will manifest themselves in some physical way. I know very clearly from my experiences in physical training, that there’s no distinction between your physical world, your mind and your body. I’ve never been one to hold a grudge. I don’t have a lot of anger or dissatisfaction in my heart. I really do always feel that things will get better, that things will improve. I think some of those skills translate very well to political life also.”

When she mentions her grueling training, her eyes light up like the election scoreboard at 30 Rock. I ask her why that is.

“Well, because I really do think that everything that I do today is easier than training,” she says with a laugh. “Having three children, being on the city council, having a business? This life is a piece of cake compared to Ironman training.”

“That’s why I think nobody will outlast me,” she says, beaming a smile. “I never get tired of this work.”

The folks at Fiesta Cornyation are busy preparing to officially introduce this year's King Anchovy LIV, Mindy Miller Hill, at...