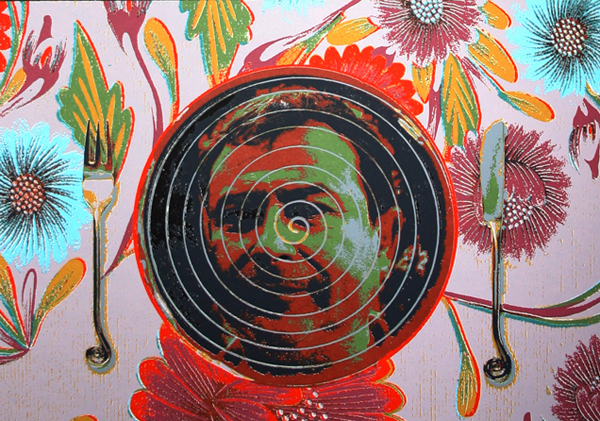 The show highlights over 30 years of Briseño’s work featuring early and never before seen paintings, as well as sculpture, photographic constructions, digital works, and public art. In a 2015 article about Briseño in the online arts publication, Glasstire, David S. Rubin, artist, writer and a former curator at the San Antonio Museum of Art, writes:

Considering San Antonio to be the most truly Mexican city in the United States, Briseño has committed long-term to raising awareness about San Antonio’s Mexican heritage, and to push the art world to be more inclusive of Latino artists. Although his art is often politically charged, Briseño’s interests lie in the scientific and philosophical realms, as his attacks on social injustice are usually veiled in imagery that explores our relationships to one another and to the cosmos. Briseño’s works are held in the permanent collections of art institutions and private collections around the world. His most recent work includes public art projects including installations at the Houston Intercontinental Airport, the Austin Convention Center, Trinity University, the Brooklyn Library System, the North White Plains Railroad Station and Metro North, NYC. Briseño received a BFA and BA from the University of Texas at Austin and a Master of Fine Arts from Columbia University in New York City in 1979. After graduating from Columbia, he continued to live in New York and has also lived in Italy and Spain.

In 2014, Briseño married his long-time partner, Puerto Rican artist Angel Rodriguez-Díaz, in New York City. The couple, moved to San Antonio in 1994 and live in a Spanish-style commercial building off Fredericksburg Road in Beacon Hill which serves as home and art studio.

A federal judge in Texas issued a temporary injunction on December 31 against efforts by the Obama administration intended to...