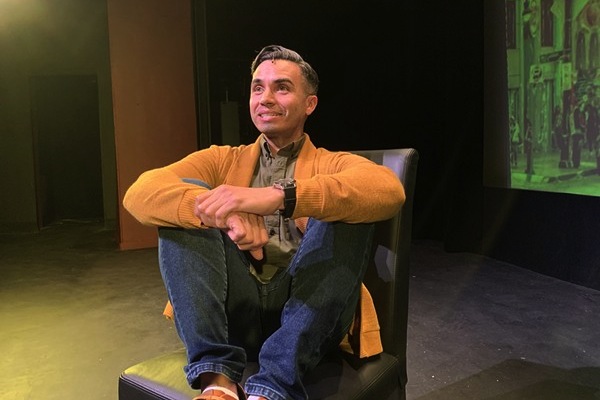 The Public Theater of San Antonio is starting its 2020-2021 season on a lighthearted note with Jonathan Tollins’ one-man comedy Buyer and Cellar. It is the first in a COVID-safe lineup of one-person plays the theatre will produce for live virtual viewing.

The comedy follows a struggling LA actor who accepts the bizarre role of staffing Barbara Streisand’s private shopping mall — which she actually built — in the basement of her Malibu home. Actor Rick Sanchez will portray both jaded youth and certified diva, as directed by Tim Hedgepeth.

Performances will be live streamed from the Russell Hill Rogers Auditorium via The Public’s website from September 10 through 20 on Thursdays through Saturdays at 7:30 p.m., and Sundays at 2 p.m. Purchase tickets here.

The Public’s season continues with the following lineup.

October 15-November 15
Squeamish by Aaron Mark
Phobia and compulsion are at work in this psychological horror about craving what terrifies us. Sharon is an Upper West Side shrink, longtime recovering alcoholic and world-class “hemophobe” who finds herself in Texas — and off her psychotropic drugs — after her nephew’s sudden death.

November 19-December 27
Fully Committed by Becky Mode
This comedy with 40 diverse characters centers around Sam, an out-of-work actress, as she works the red-hot reservation line at Manhattan’s top restaurant. Can she look out for herself while juggling scheming socialites, name-dropping wannabes, fickle celebrities and egomaniacal bosses?

January 14-February 14
Thurgood by George Stevens Jr.
This story rich in history, humanity and humor examines the life of Thurgood Marshall, the first African American Supreme Court justice, and his role in the historic Brown v. Board of Education decision.

February 25-March 28
Empanada by Anel I. Flores
Sometimes hilarious, other times dramatic and emotional, this story by a San Antonio-based writer addresses the difficult challenges a Mexican American woman faces when family, religion, cultura and her inner truth come together.

April 8-May 9
Golda’s Balcony by William Gibson
This story of war and peace takes a dramatic look at idealism, power and the strength it takes to shape the destiny of a nation. The play is set in 1973, on the eve of the Yom Kippur War, and uses flashbacks as Israeli Prime Minister Golda Meir tells the story of her life.

May 13-June 13
I Am My Own Wife by Doug Wright
This play follows the fascinating story of Charlotte von Mahlsdorf, a real-life German transvestite who survived both the Nazi onslaught and the repressive East German Communist regime that followed.

Jul 15-Aug 15
Ann by Holland Taylor
This inspiring and funny show presents a no-holds-barred portrait of Ann Richards, the legendary Texas governor. The play brings audiences face-to-face with a complex, colorful and captivating character as big as the state from which she hailed.

LGBTQ Community Organizations Participating in the ‘Big Give’

Six organizations with links to San Antonio’s LGBTQ community are participating in the Big Give, a 24-hour day of online...