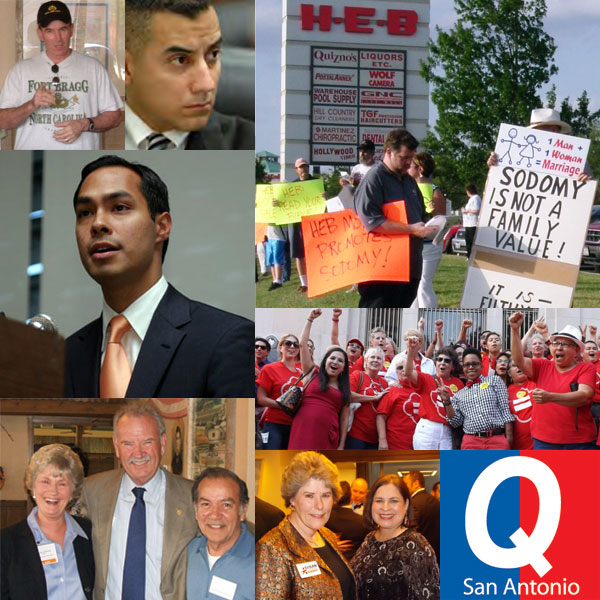 On October 1, QSanAntonio.com joined forces with Out In SA as part of their new web site and quarterly print publication.

In talking about QSanAntonio’s participation in Out In SA, Iris Dimmick of the Rivard Report wrote last June:

“San Antonio native Sam Sanchez may be the most recognizable name in the LGBTQ news community as founder, publisher, designer and writer for QSanAntonio, a widely-read online media source solely dedicated to covering local LGBTQ issues and events. He started QSanAntonio in 2006 as an ‘intellectual exercise’ after returning home from an almost 30-year career in publishing in New York to take care of his aging father. As a one-man-band, Sanchez said he welcomes the transition.”

“This (new arrangement) gives me more time in an environment where everything else I don’t like to do gets taken care of for me … and frees up time to write stories I’ve been meaning to,” Sanchez told Dimmick.

QSanAntonio went online in January 2006 offering readers an alternative to the bar magazines which were the only LGBT publications available in San Antonio at the time.

Sanchez’s news and event reports will now be found at Out In SA’s web site on The QSA blog. He will also contribute news reports for Out In SA’s print edition which will be published quarterly beginning in November.

“I’ll be covering the news as usual in the blog,” says Sanchez. “The best part is that now I’ll be part of publication that can offer not only expanded coverage of the community but has the resources to engage readers through the internet, in print and at promotional events.”

Sanchez says the QSanAntonio web site will be re-purposed as an archive for the publication’s articles and photos.

Below is a sampling of news stories covered by QSanAntonio during its nine years of reporting.

2006 – H-E-B is targeted by homophobes
Christian radio talk show host Adam McManus staged three pickets against H-E-B after the grocer donated $300 to PrideFest. The LGBT community fought back with a wave of thousands of emails to H-E-B that eventually overwhelmed McManus’ efforts.

2006 – Police Chief William McManus comes to San Antonio
Ever since he was hired in 2006, Police Chief William McManus proved his determination to improve the Police Department’s historically rocky relationship with San Antonio’s LGBT community. In his first year, McManus said he did not endorse gay witch-hunts or the entrapment of gay men by undercover police. He allowed an LGBT group to attend police cadet training sessions and suggest curriculum. He and his officers attended meetings with gay bar owners to discuss crime reduction. With his background as the LGBT liaison to the Washington DC police, McManus brought a much-needed, fresh perspective to the SAPD. In 2007, he was Grand Marshal of the Pride Parade.

2007 – Marine Sargent Eric Alva battles Don’t Ask, Don’t Tell
In March 2003, Marine Sgt. Eric Alva of San Antonio became the first soldier injured in the Iraq War when he stepped on a land mine resulting in the loss of his right leg part of an index finger. On Feb. 28, 2007, he joined Rep. Marty Meehan, D-Mass., in calling for an end to the government’s Don’t Ask, Don’t Tell policy. For the next three years, Alva traveled around the county as a spokesperson for the Human Rights Campaign advocating for the repeal of the policy. In 2010, he stood on the dais next to President Barack Obama when the repeal of the Don’t Ask, Don’t Tell was signed.

2008 – Sexual orientation added as protected class in city’s employment policy
Thanks to the efforts of City Manager Sheryl Sculley working with city attorneys and a committee of citizens from every City Council district, the City of San Antonio’s anti-harassment and discrimination policy now includes sexual orientation as a protected classification. However, the policy change did not cover transgender individuals.

2008 – Over $150,000 raised in S.A. to ban gay marriage in California
In 2008, an amazing total of $153,873 was raised in San Antonio to support Proposition 8, the California ballot measure that banned gay marriage in that state. Most of the money came from 14 San Antonians who donated approximately $10,000 apiece. A report in the San Antonio Express-News later identified those high value donors as Mormons.

2009 – San Antonio elects an LGBT-friendly mayor
The election of Julian Castro as Mayor of San Antonio ushered in a new era of acceptance for LGBT citizens in our city. Not only did Castro seek the endorsement of the Stonewall Democrats, after he was elected he marched in the Gay Pride Parade as Grand Marshal. Speaking before the Stonewall Democrats he said there were no “second class citizens” in San Antonio and he endorsed adding protections for transgender people into the city’s employment policy. During his tenure, he voted in favor of giving domestic partner benefits to city employees, supported marriage equality and championed the city’s nondiscrimination ordinance.

2009 – An erroneous drug raid on the home of lesbian couple
Armed with a warrant based on an erroneous tip from an informant, a team comprised of nine San Antonio Police officers, three Leon Valley patrolmen and a drug-sniffing dog conducted an April 28, 2009 raid on the home of a lesbian couple and found no evidence of wrongdoing. The women said they were left shaken and traumatized not only by the experience but also by the conduct of the police officers on the scene. Later that year, the women filed a federal lawsuit against the nine officers involved in the raid. In 2012, the couple settled the suit with the SAPD for $145,000.

2010 – Tobin Center named for gay arts benefactor
When San Antonio officials announced the creation of the Tobin Center for the Performing Arts in the former Municipal Auditorium, they lauded namesake Robert Lynn Batts Tobin’s life as a businessman, art collector, philanthropist and opera lover. What none of them mentioned was that Tobin was a gay man. Tobin died in 2000 but his legacy lives on in the new center where LGBT San Antonians can embrace his memory proudly.

2011 – Homophobic comments get Bexar County Dem Chair Ramos ousted
In a March 2011 interview with the San Antonio Current, Bexar County Democratic party chair Dan Ramos had some choice words about the Stonewall Democrats of San Antonio. “I liken them to the Tea Party — the Tea Party and the fucking Nazi Party — because they’re 90 percent white, blue-eyed, and Anglo, and I don’t give a fuck who knows that. Just like the blacks … they’re American, but you can’t get your way just because you’re black.”

2011 –  City Council approves domestic partnership benefits for city employees
After much public input and acrimony from Christian extremists, the San Antonio City Council passed a $2.2 billion budget on September 15 that includes domestic partnership benefits for city employees. The vote was 8 for and 3 against. District 9 Councilwoman Elisa Chan, Councilmen Carlton Soules of District 10 and David Medina of District 5 constituted the “no” votes.

2012 – PrideFest goes down in sea of red ink
PrideFest San Antonio board members revealed in July 2012 that the event racked up $23,000 in debt they cannot pay. In interviews with QSanAntonio, PrideFest board members Donna Rose Menta, John Barbo, Matt Saxon and Judy Gayle, said their co-chair and lead organizer, Deb Browning, made decisions autonomously that affected the event’s bottom line and in the end contributed to the staggering deficit.

2012 – Vindication for the San Antonio Four
In 1997 and 1998 four Latina lesbians from San Antonio (known as the San Antonio Four) were wrongfully convicted and sentenced to long prison terms for allegedly sexually assaulting two young girls. In 2012, one of the girls came forth saying the incident never happened. In 2013, the women were released on bail and Bexar County District Attorney conceded publicly that key evidence, a pediatrician’s testimony for the prosecution claiming evidence of trauma on the children’s genitals –crucial to the convictions—was based on so-called junk science.

2013 – NDO opponents target Mayor Julian Castro and Councilman Bernal for recall
Several groups targeted  Mayor Julian Castro for “violating his duties according to the Constitution for supporting the proposed non-discrimination ordinance.” Also targeted was District 1 City Councilman Diego Bernal who introduced the measure. The groups seeking the recalls included the Bexar County Conservative Coalition, the San Antonio Family Association, and the Justice Foundation. The effort failed because the groups could not collect enough signatures to initiate the recalls.

2013 – Elisa Chan reveals homophobic views in secret recording
Homophobic comments made by San Antonio City Councilwoman Elisa Chan during a secretly recorded staff meeting in May 2013 made headlines across the country after they were revealed by the San Antonio Express-News.

The Diablos, San Antonio's reps in the National Gay Flag Football League, played the first game of their sixth season...