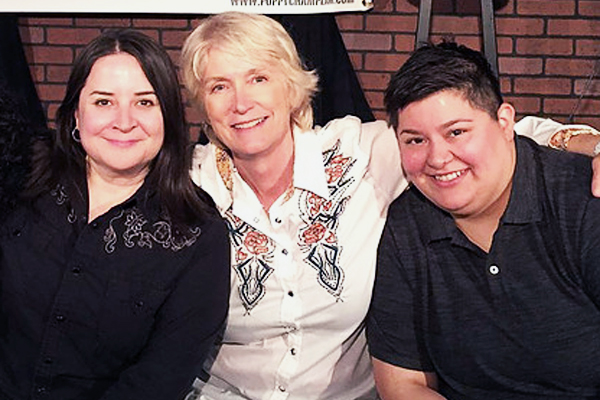 Comedienne Poppy Champlin is headed back to San Antonio with her unique comedy revue, The Queer Queens of Qomedy, for a one-night-only gig on September 5 at the Laugh Out Loud Comedy Club.

Queer Queens is a four-city tour that starts in San Antonio and goes on to Austin, Houston, and finishes up in Dallas. Champlin’s sidekicks on the tour are two of the funniest women in Texas: Sandara Valls from Laredo and Crist Guzman from Dallas.

Valls, a native of Laredo, Texas, who now lives in Los Angeles, has been featured in two Showtime specials, The Latin Divas of Comedy, and Pride: The Gay and Lesbian Comedy Slam. Curve Magazine has boasted that Valls is “one of the top badass comics to watch for.” In June, Valls performed at Pride San Antonio’s Pride Bigger than Texas Festival.

Guzman got her start in radio working behind the scenes at Power 108 in Waco where she developed her own show, This & That. In Dallas, she regularly performs in at Hyenas, Hat Tricks and the Dallas Comedy House. According to Champlin, Guzman’s act recounts hilarious tales of LGBT marriage and family situation that “almost” everyone can relate to.

A portion of the Queer Queens of Qomedy‘s box office proceeds will be donated to Pride Center San Antonio.

The Queer Queens of Qomedy, September 5 at 7:30 p.m. at the Laugh Out Loud Comedy Club, 618 NW Loop 410. General admission is $25. VIP Package is $40 and includes meet and greet with the cast and priority seating. Click here to purchase tickets.

If you hadn’t noticed, the 1964 madcap musical Hello, Dolly! returned to the stage in grand fashion last year thanks...