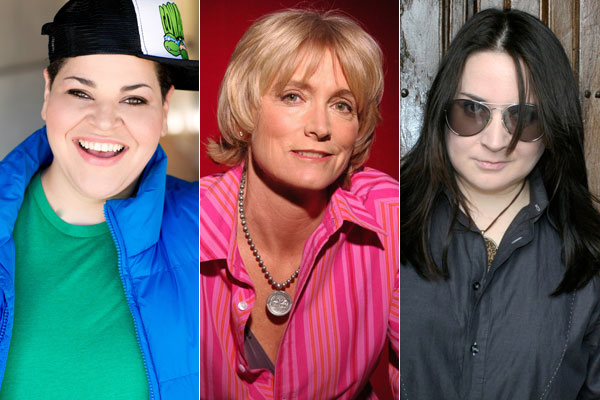 Jen Kober, Poppy Champlin, and Sandra Valls are the "Queer Queens of Qomedy" who will perform at the Laugh Out Loud Comedy Club on September 20. (Courtesy photos)

Comedienne Poppy Champlin is coming back to San Antonio on September 20 with her unique comedy revue, The Queer Queens of Qomedy, and she’s bringing with two funny women — Jen Kober and Sandra Valls — with her. The show will be on stage at the Laugh Out Loud Comedy Club.

Headlining the Queen‘s tour is Kober, who’s blend of original stand-up and story telling is bringing crowds to their feet in comedy clubs across the US. Kober has appeared on NPR’s Snap Judgement, ABC’s The Middle and BET’s Real Husbands of Hollywood among numerous other shows.

Valls, a native of Laredo, Texas, who now lives in Los Angeles, has been featured in two Showtime specials, The Latin Divas of Comedy, and Pride: The Gay and Lesbian Comedy Slam. Curve Magazine has boasted that Valls is “one of the top badass comics to watch for.”

The bio on her website describes Champlin as, “one of the quickest witted comedians working either coast today. She has a wild and roaming spontaneity, which makes each show actually feel like one of a kind. She is a powerful performer who can glide between practiced patter and off the cuff insightful improvisations.”

A portion of the Queer Queens of Qomedy‘s proceeds will be donated to Pride Center San Antonio.

Poppy Champlin & The Queer Queens of Qomedy, September 30 at 7:30 p.m. at the Laugh Out Loud Comedy Club, 618 NW Loop 410. General admission is $25. VIP Package is $35 and includes meet and greet with the cast and priority seating. Click here to purchase tickets.

A collaborative effort initiated between the Texas Health Institute and the Equality Texas Foundation will work to improve the health...