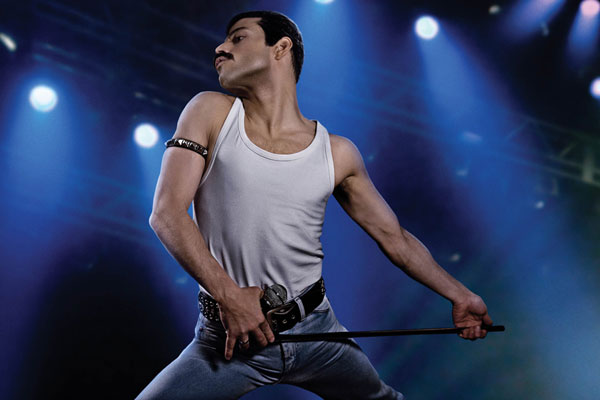 From a cinematic standpoint, there is something deeply fulfilling about witnessing the creation of a song — from the seedling of an idea inside a musician’s head to the concept taking shape to form the perfect harmony or poetry or beat. Whether it’s in a makeshift studio in Memphis spitting out gangsta rap like in 2005’s Hustle & Flow or in the hands of professional producers recording “Good Vibrations” like in 2014’s Love & Mercy, the birth of a song for the big screen can be thrilling if done correctly.

In Bohemian Rhapsody, the musical biopic of Queen vocalist Freddie Mercury, the opportunity to craft these types of memorable scenes exists — especially with the many hits the British rock band had in the ’70s and ’80s — but Oscar-nominated screenwriter Anthony McCarten (The Theory of Everything) only manages to partially recreate the magic audiences can just imagine took place between the walls of a Queen recording session. Watching drummer Roger Taylor (Ben Hardy) do 30 takes of “Galileo!” doesn’t cut it.

Still, with Bohemian Rhapsody immersed in as much of Queen’s music as it could possibly fit into a 134-minute-long feature film, it’s hard to argue that Queen’s catalogue wasn’t treated with the utmost respect. And with actor Rami Malek (TV’s Mr. Robot) transforming into a larger-than-life legend like Freddie and delivering the best performance of his young career — and an Oscar-worthy one at that — he keeps the film from going completely out of tune.

Bohemian Rhapsody is an irrefutable crowd-pleaser — a sort of high-energy concert movie posing as a dramatic biopic. (It probably won’t be uncommon if moviegoers start to jam out to the most dynamic scenes.) Even when he’s not center stage, Malek is a rock star. Much like Joaquin Phoenix’s Johnny Cash in the 2005 biopic Walk the Line, he’s not a dead-ringer for Freddie, but has no problem capturing his I-don’t-give-a-fuck attitude, flamboyant nature and unbridled talent.

Where the film falters, however, is in the formulaic way McCarten assembles the finer points of Freddie’s life and career and how unsure he seems to be in dealing with the most sensitive issues the rocker goes through, including his coming to terms with his homosexuality, which McCarten skims through without much detail. If anything is frustrating about Bohemian Rhapsody, it’s the kid-glove treatment it gets from the script.

But Malek. Oh, Rami Malek. It’s virtually impossible not to recommend Bohemian Rhapsody based on his performance alone. A Star is Born actors Bradley Cooper and Lady Gaga might’ve been the on-stage performers everyone was talking about last month, but it’s a new day and Malek is “traveling at the speed of light.” Call him Mr. Fahrenheit.

Nightlife impresario Rey Lopez's fourth annual Out in the Park, slated for November 3 at Six Flags Fiesta Texas, will...