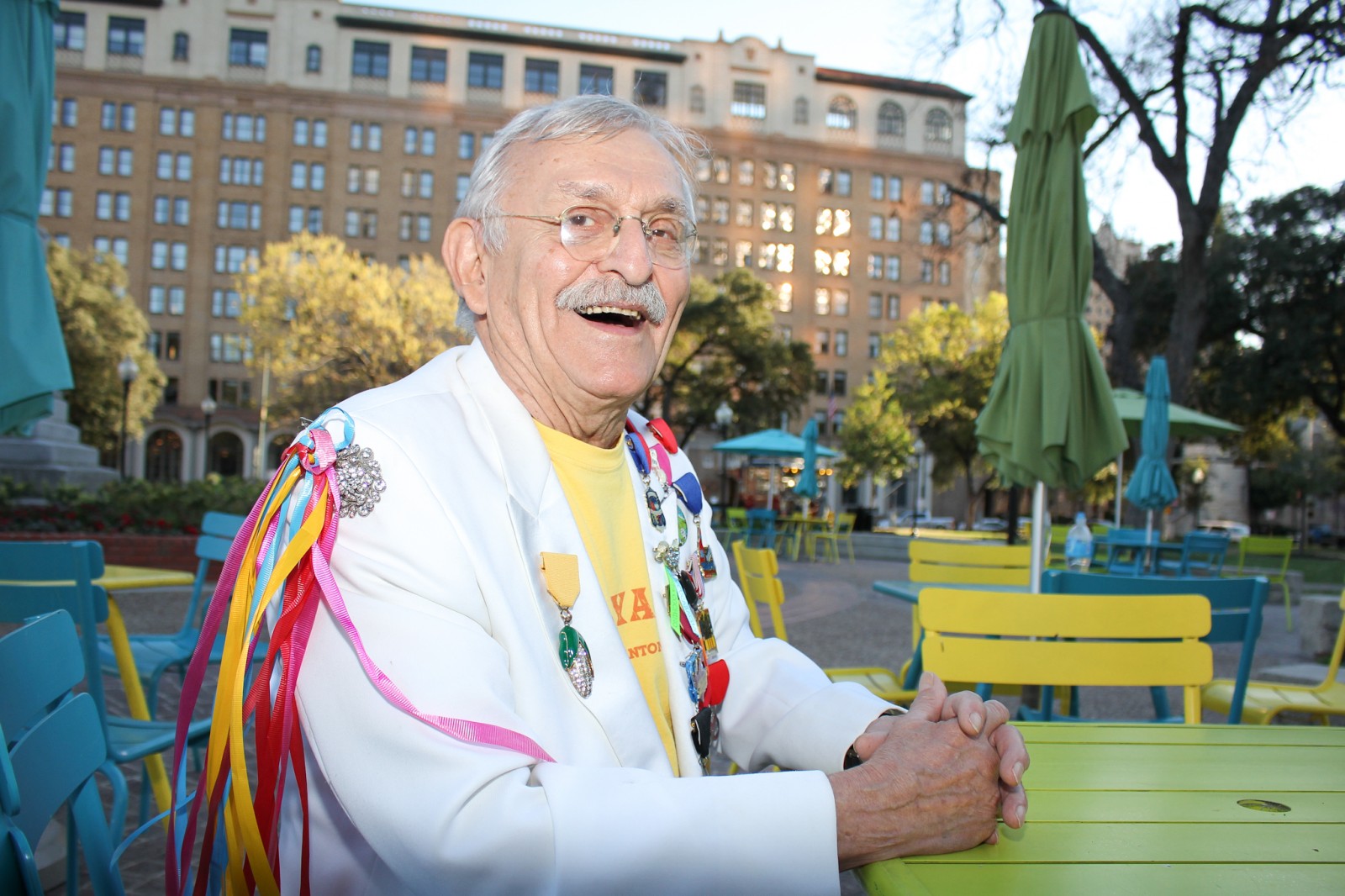 Ray Chavez photographed for Out In SA by Julián P. Ledezma

“Ray is the heart and soul of Cornyation … it wouldn’t be here without him.”

The house was packed and Cornyation was in full swing.

The music was blaring, the stage lights glaring, and a group of actors and dancers were performing in another outlandish skit to thunderous roars, when, suddenly, a dancer took an unscripted nosedive into the tables and attendees below.

“Fortunately, no one was hurt,” Ray Chavez recalled.

On other occasions too numerous to count, Chavez had no choice but to push the originally planned first skit to the last of the lineup because some of the actors were still hauling down the highway, or designers were backstage frantically stitching their costumes only seconds before showtime.

But somehow, someway, everything always falls into place despite the on- and off-stage madness, and Chavez, who has organized Cornyation for 33 years, can smile and breathe a sigh of relief.

There’s not much time to relax, however. That was just the 7:30 evening show, and the next one starts at 10.

“I like the energy and the success that happens when everyone comes together to create the ‘monster’ that Cornyation has become,” the spry, 77-year-old coordinator/director said. “I never imagined it would become such a big event, and to have the city support it, as well as all the people who come to the show, or those who don’t attend, but donate money just to keep it going, is amazing.”

Chavez’s involvement with Cornyation began in 1961, when, shortly after leaving the Army, he and a friend auditioned for a play, No Time for Sergeants, at the San Antonio Little Theater (SALT). At the time, Cornyation was held at the Arneson River Theater as a fundraiser for SALT.

That was until, as Chavez remembers, the San Antonio Conservation Society sent a letter to SALT, letting them know the show could not continue at the Arneson because it was “too modern.”

Cornyation found a temporary home upstairs of La Fontana restaurant in La Villita, but because of the location, attendance dwindled and the show was abandoned. In 1982, however, Jerry Pollack, who was hired as the new director of SALT, approached Chavez and Bob Jolly about bringing Cornyation back to life.

After a failed attempt at jump-starting the event at the Arneson again, mainly because people no longer knew what it was, Chavez asked the late Hap Veltman, owner of the Bonham Exchange, about hosting Cornyation in the third-floor ballroom.

“It was a huge success,” Chavez said. “It got so big that we had to relocate because we were exceeding the Fire Department’s occupancy safety regulations.”

So Cornyation moved to Beethoven Hall, where it enjoyed success for a number of years until, as expected, it outgrew that space, too. (Its present venue is the Empire Theatre.)

Tom McKenzie, Cornyation board president and a former King Anchovy, has known Chavez since 1988 and credits him, along with Bob Jolly, for reviving Cornyation after it fell into an abyss for several years.

“Ray is the heart and soul of Cornyation,” McKenzie said. “He’s the one who orchestrates it every year for free. It’s a huge commitment of time and energy, and it wouldn’t be here without him.” Ever wonder how King Anchovy, who watches Cornyation unfold while perched atop his throne, got his name? Chavez explains it all has to do with the very first Cornyation, which began as a satire of the Coronation of the Queen of the Order of the Alamo and its elegant duchesses with their flashy, bejeweled gowns and pomp and circumstance.

“The first [Cornyation] court was the Court of the Cracked Salad Bowl,” Chavez said.

“All the duchesses wore components of a salad, and the king was King Anchovy, so that stuck. It used to be more about the gowns. We ridiculed the Coronation of the Queen of the Order of the Alamo. We used trash bags, glitter, whatever we could find. Now there are more skits and we’re a satire of local and national news.”

McKenzie, meanwhile, is proud of the fact that admission fees collected last year allowed the all-volunteer production to distribute $200,000 to a number of area charities.

“It’s great that we’re able to donate money to BEAT AIDS or the San Antonio AIDS Foundation, for instance,” he said. “It enables these nonprofits to help people affected by HIV/AIDS. We also contribute to the Robert Rehm Scholarship for students majoring in theater arts in college. We provide students a stipend for four years if they maintain good grades.”

Ironically, Chavez points out that while Cornyation is happening on Wednesday night during Fiesta, the Coronation is occurring simultaneously at the Majestic Theater. “What a coincidence that both theaters share a back wall,” he said. “There are more queens under one roof than anyone might imagine.”

Finally, Chavez shared an interesting tidbit many Cornyation-goers might be surprised to know.

“We’ve never had a dress rehearsal,” he said. “The first time it all happens is at 7:30 Tuesday. It adds to the hilarity and drama that Cornyation is all about.”

The San Antonio LGBT Chamber of Commerce presented three people with awards during their annual State of the Chamber event...