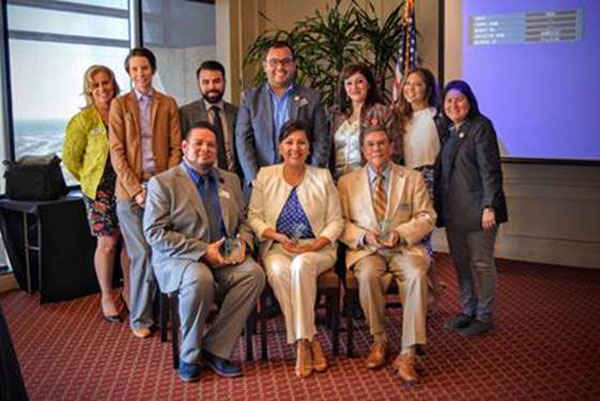 The San Antonio LGBT Chamber of Commerce board of directors (standing) with the three State of the Chamber award recipients (seated): Robert Salcido, Angeles Velenciano and Anthony Ruiz. (Courtesy photos)

The San Antonio LGBT Chamber of Commerce presented three people with awards during their annual State of the Chamber event on March 31.

The gathering, held at the Frost Bank Plaza Club, celebrated the victories of the community for 2015. In his address, the chamber’s president, Luis Vasquez, offered his vision for the organization’s coming year.

Awards were presented to:

Angeles Velenciano, CEO of the National Diversity Council received the Chamber Champion award. According to her bio, “Valenciano is a seasoned strategist with over fifteen years of experience in Human Resources, where ten of those years have been dedicated to diversity, organizational change and development.” For the past several years, she served as vice president of business development for the Texas Diversity Council.

Robert Salcido, a regional field organizer for Equality Texas, received the Dedication of Service award. Salcido is the board chair for Pride Center San Antonio, current president and founding member of LULAC Council 22198 Orgullo de San Antonio, on the leadership team at CAUSA, on the mayor’s LGBT advisory committee, and served for four years on the board of the SA LGBT Chamber of Commerce.

The SBA and the chamber have been working together on an “inclusion and outreach initiative [which] aims to bring focus on economic empowerment in the LGBT business community by providing access to SBA programs and services.”

Ready for Fiesta? Events to Consider

Fiesta San Antonio is observing its 125th anniversary with ten days of parties and parades beginning on April 14. The...