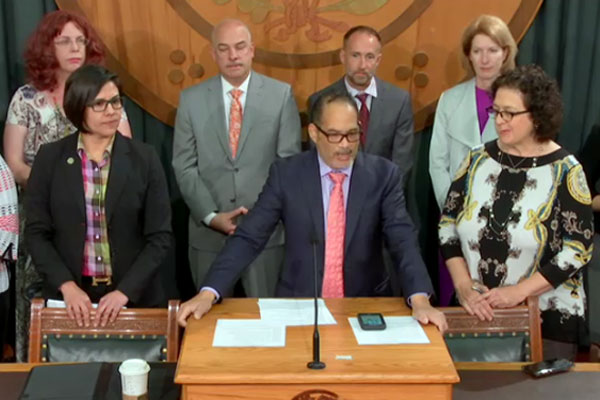 State Rep. Garnet Coleman (D-Houston) held a press conference at the State Capitol on April 29 to announce he is introducing a bill to add gender identity to the list of protected classes in the state’s hate crimes law.

The James Byrd Jr. Hate Crimes Act was passed by the State Legislature in 2001. The measure strengthened penalties for crimes motivated by race, religion, color, gender, disabilities, sexual preference, age or national origin. However it did not include gender identity among the protected classics.

Coleman’s bill, HB 1513, would correct that exclusion and bring the law in line with federal hate crime laws. The measure was scheduled to be heard by the the House Criminal Jurisprudence Committee which will determine if the bill moves out of committee. This is the seventh time Coleman has introduced this legislation. 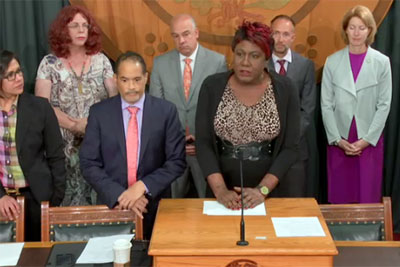 Also at the press conference was Rep. Mary González, the chair of the LGBTQ Caucus, who said the bill was of great importance because, “Everybody has the right to live the most authentic version of themselves.”

Trans activist Monica Roberts of the Transgender Education Network of Texas reiterated the importance of adding gender identity to the law, citing the prevalence of violence against trans people, especially trans women of color. She went on to mention recent crimes against trans people in Dallas, Houston and Kileen.

Roberts said there was far too much anti-trans animus which she believes is motivated by political influences. “It’s past time that transgender people be added to Byrd hate crimes bill,” she added.

Rep. Anchia, who said he believed he represented the gayest district in the state, addressed the press conference in Spanish and English. He said that when he began supporting LGBTQ issues, some of his constituents asked him why that was important.

Anchia told them that when it came to discrimination, the themes of LGBTQ community are the same issues of the Hispanic community. “These people are great Texans and great Americans who fill our churches and neighborhoods,” he said.

San Antonio artist Gene Elder who had a long career as an artist, writer, activist and most recently as the...