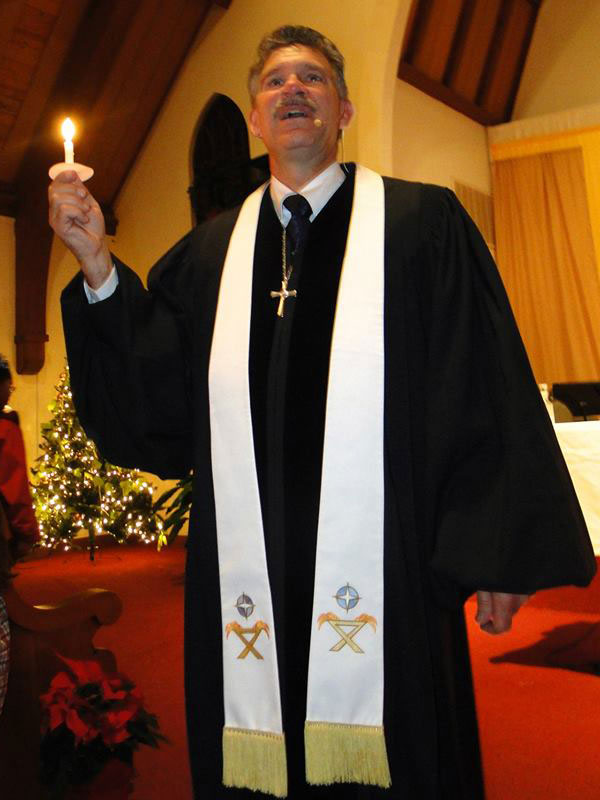 Reverend Mick Hinson, pastor of the Metropolitan Community Church of San Antonio announced on January 10 that he is resigning his position. He made the news public at Sunday services and in a post on Facebook, saying he is leaving the ministry and taking up hospice work.

Hinson came to MCC SA in 2007 after spending 8 years at the MCC Church in Charlotte, North Carolina. He is the fourth pastor in the church’s 35-year history.

“I feel and believe that God wants us in San Antonio,” he told QSanAntonio after his arrival. “We are so excited about being here, meeting new people, and doing ministry in new ways! The positive energy is so crisp and vibrant it is amazing to watch God work in it.”

Rev. Mick Hinson (third from left) at his installation at MCC San Antonio in 2007. (Photo by Sam Sanchez)

Marsha Warren, who serves on MCC’s board of directors, told Out In SA the announcement caught the congregation by surprise. She said Hinson discussed his departure with the board but waited to tell everyone else at Sunday services. Despite the surprise, she echoed the sentiments of many in the congregation, “There are no words I can say about the gratitude and love I have for this man,” she said.

MCC’s board of directors put out the following statement:

The Board of Servants of MCCSA want to offer our heartfelt congratulations and support to Rev. Mick Hinson on his retirement from pulpit ministry. Rev. Hinson is following his heart and led by God to work full time in hospice ministry.  As Rev. Hinson said in a statement earlier, “God is doing a mighty new work in all our lives.” We are extremely happy for Mick, [his husband] Gene, [and their children] Dexter and Kheeda as they begin their new journey and thank them for being part of our church for the last nine years.

MCCSA is also beginning a new journey. As Phillipians 3:14 says “Press toward the goal unto the prize of the high calling of God in Christ Jesus”. God’s work is not done at MCCSA and we will continue the furtherance of God’s kingdom. The Board of Servants is fully committed to our church and all its members.

May God continue to Bless and Keep us All

Following is the text of Hinson’s announcement:

It is with an ambivalent and obedient heart that I step down as Pastor of MCCSA. It has been a wonderful and fruitful 9 years. God has moved in mighty ways touching hearts, lives, and souls over this time. I will not be taking on a new church but retiring from Pulpit ministry. God has led me to Hospice work. Sunday, January 31 will be my last Sunday at MCCSA and I will begin my new duties shortly afterwards. All of you are in my prayers as I hope my family and I are in yours. God is doing a mighty new work in all of our lives and I am happy to have been a part of your journey. God bless. — Mick Hinson

A group calling itself LGBT SA4Sanders, is planning a fashion show and block party in Beacon Hill on January 23....