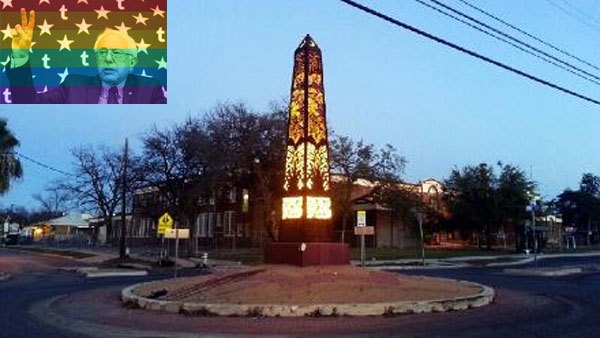 LGBT SA4Sanders is organizing a fashion show and block party in Beacon Hill on January 23.

A group calling itself LGBT SA4Sanders, is planning a fashion show and block party in Beacon Hill on January 23. The free event has been dubbed Project Equality.

Project Equality will unfold near the Beacon Hill circle under the patronage of Karolina’s Antiques and Burnt Ends Barbecue. The two sponsors have stores in the shopping center near the traffic circle at 1700 Blanco Road. According to the Facebook event page, there will also be live bands but no list was given.

The fashion show will feature work by four San Antonio designers: Jennifer Monrreal, Shanavier McLemore,  and Laverne Witherspoon. Anthony Ryan, who came to fame on the Project Runway television series and now has a shop called Anthill on the far North Side, will serve as a host.

The Bernie Sanders group was organized last year by Jordan Gregory with the name LGBTQIA San Antonio for Bernie Sanders. Since then the group, which has about 130 likes on its Facebook page, changed its name and is now under the leadership of Gilbert Martinez. Project Equality is Martinez’s first event with the group.

In an interview with Out in SA last fall,  Gregory spoke about the group’s aims,  “The simple fact is many are still unaware of [presidential candidate] Bernie Sander’s consistent support of LGBT rights and equality spanning more than three decades . . . Our group is proud to be made up of passionate, inspired supporters who want to see America move forward without any of the negativity we are constantly surrounded by from those across the political spectrum.”

“Even if you are undecided about your presidential candidate or have different political affiliation, please feel free to join us, celebrate equality, and have fun doing it, says Martinez.

LGBT SA4Sanders is charging no admission which means there’s no money being raised for the Sanders campaign. Out in SA asked Martinez why a political group would throw an event that gives more publicity to designers and shops and not so much to the candidate?

“We made it a point to make it not as partisan as possible to engage all of San Antonio,” said Martinez. “At the end of the day our group is trying to spread awareness about Bernie Sanders and there will be a big following of Bernie supporters. That’s why it is called Project Equality, we are trying to get all of San Antonio involved in the political process without ostracizing say maybe an undecided voter.”

Who could forget the look on Drake’s face when Madonna kissed him onstage at Coachella last year? That look, equal...