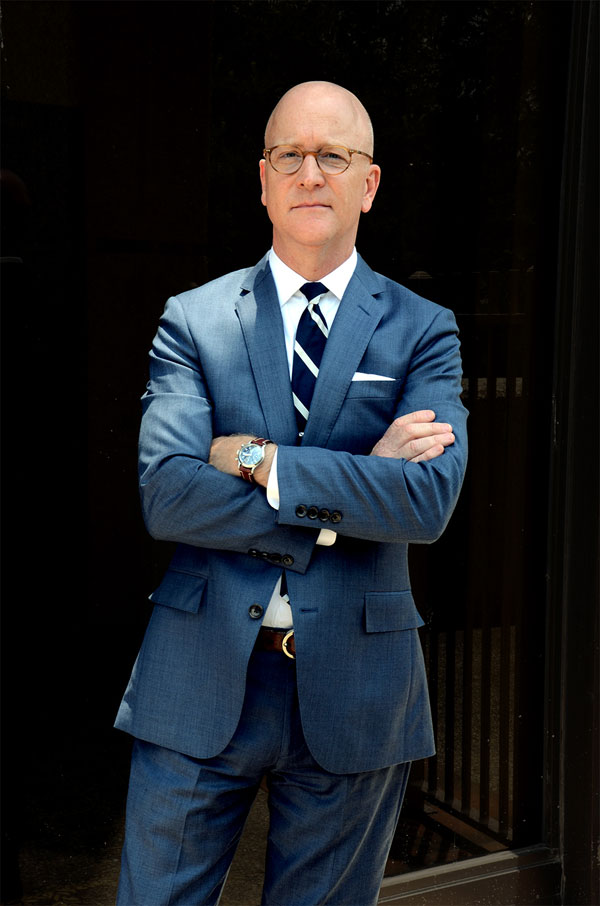 Former U.S. Attorney Robert Lee Pitman was invested as federal judge for the Western District of Texas in San Antonio on April 17. He is the first openly gay federal district judge from Texas and one of 10 LGBT federal judges in the U.S.

Pitman’s career includes time spent as a federal prosecutor and a magistrate judge. His appointment, which is a lifetime position, fills the longest running judicial vacancy in the state. The seat remained empty for six years.

Judge Pitman spoke to Out In SA shortly after his investiture. He says he owes his advancement to the federal bench to the legal professionals who came before him and paved the way for LGBT people to serve in the judiciary.

Judge Pitman, thank you for taking time to talk to us. How’s the new job?

The investiture on April 17 was  a formal swearing in to invite friends and family to celebrate with me. I was actually sworn in on the 19th of December and hit the ground running.

Before I get to your law career, I’d like to ask about your early years. You grew up in Ft. Worth the youngest of five kids. Was there any advantage to being the youngest?

I think many advantages. Of course, my brothers and sisters would tell you the advantage is you’re spoiled rotten. I would contest that of course. More than anything, by the time you’re the fifth child, your parents are worn out and you get an easier time of it.

I hear you raised pigeons. What else held your interest growing up?

I raised homing pigeons and show pigeons. I did that all through middle and high school. I have always loved animals. I became fascinated with the idea you could take these birds and selectively breed them for the trait of finding their way home from long distances. There are birds that you can drive 500 miles away in a closed container, let them out and they will be home before you are.

I was also very much a reader. At time I really loved science and I thought I had a future in medicine. As a high schooler, I worked in a hospital as an operating room technician. Later, I took a bit of a turn and realized my skills set and interests really lie in things more related to law.

How did you develop an interest in the law?

The first time I had an inkling that this was a good fit for me was as a junior in high school. I participated in something called Youth in Government which consisted of a mock legislature and mock court experience. I did it for extra credit and ended up competing at the regional level and at the state level where I won the designation of “outstanding prosecutor.” I went on to the national convention. Who would have thought at the age of 17 I had already set the die for something I would do in life?

You received scholarships to other colleges. Why did you choose to attend Abilene Christian University?

All of my brothers and sisters had gone there.  I was raised in the church of Christ and ACU is the flagship university for the Church of Christ. The most important dynamic was that most of my friends were going there and so I made the decision to go to Abilene Christian and had a very good experience there.

One thing that limited my experience [at ACU] was that it’s a very homogenous place. I didn’t have a full appreciation of the importance of diversity until I went to the University of Texas, which is at the other end of the spectrum, and realized the importance of being around people who have different perspectives on the world.

You were student body president at ACU. How was that experience and did that ever make you consider taking up politics?

I was always more interested in the policy end of it more than the politics. I enjoyed that time but it never translated into an interest in being political.

You’ve said in other interviews that you came to peace with your sexual orientation during law school when you met other gay students. There must have been a personal struggle.

There was a struggle. In retrospect, I was very lucky to be surrounded by people who were kind and caring and in an environment that exposed truths that I had not been exposed to before. In my class at the University of Texas Law School, about 20 percent of the males were gay and that was astounding to me because I came from a world where I thought I was the only one.

You started your career clerking for a federal judge, then to a private firm, federal prosecutor, magistrate judge, U.S. attorney and now federal judge.  Was your sexual orientation ever a stumbling block?

It really wasn’t which frankly surprised me. I was very fortunate to come along at a time when the men and women who came before me had done the hard work. They came out at great risk and sacrificed to pave the way for me and my generation. I rode the wave. Not to say there weren’t some who questioned or who thought [my sexual orientation] might be an impediment.

I was always concerned that I would be denied opportunities. So, I was always made it a point to do my very best and to work hard so that if I was denied opportunities it would be apparent that it was because of something that had nothing to do with the job. I didn’t want to give them any excuse for not giving me a promotion or position because I wasn’t qualified or didn’t work hard enough.

How does this job compare to your previous job as U.S. Attorney? Bigger office, better perks?

(Laughs.) They’re very different jobs.  I’m grateful to have served as as U.S. attorney, it was very challenging and rewarding. However, this job a good fit for me. As much as I loved being an advocate, I also love being in a position of trying to find the right result regardless of who the client is.

There are many aspects of this position that serve my personality well and I’m very grateful to have it. It’s very sobering to have a job that has a lifetime appointment. It makes you reflect that with that privilege comes great responsibility to get it right and be worthy of the trust that’s been put in you.

There are so few opportunities to actually be a judge that you can’t go into it with that as your only goal. You can aspire to it and hope that opportunity comes to you. My advice would be to look for a practice that gets you into a courtroom so that you have the opportunity to see good lawyers practice; to see good judges doing their craft.

Be active in the legal community and in the larger community so that people have a chance to know you. On the federal bench we have a lot of power and make very important decisions. People need to know who you are and they need to have an opportunity to see not only that you’re competent and know the law but that you have the right demeanor and personality for the job.

Do you think it’s become easier for LGBT individuals to enter the judiciary?

Absolutely. I think now that the barrier is down, people understand that it’s an irrelevant consideration. Men and women who are judges, prosecutors or public servants of any type should be judged by the quality of their service and the commitment they have to their job.

“When I was in Chiapas a couple of years ago, a woman came up to me in the market with...