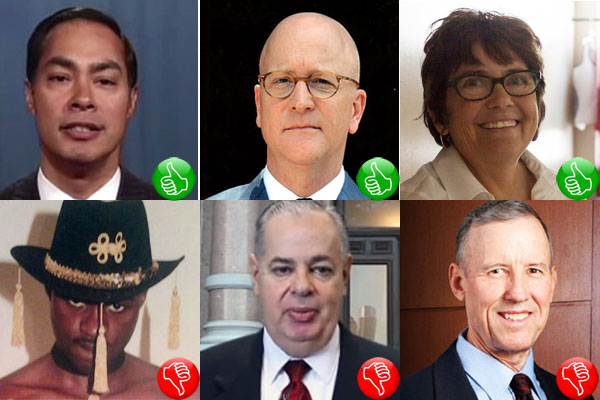 Julian Castro’s continuing support of LGBT equality
When he was mayor, Julian Castro championed changes to the city’s nondiscrimination ordinance to include LGBT protections. Now that he’s Secretary of Housing and Urban Development, Castro has continued to voice his support for LGBT issues.

In October, Castro addressed the HRC Foundation board of directors and the HRC board of governors at a luncheon where he said, “The fight for full equality for LGBT Americans is a defining issue of our time . . .” Later the same month, Castro made a YouTube video in which he expressed support for the Houston Equal Rights Ordinance.

Another Castro video was distributed in which he shows support for HUD’s Gender Identity Rule which was proposed on November 20, the Transgender Day of Remembrance. In the video Castro says, “Everyone deserves to live with dignity regardless of their gender identity. That’s why HUD is taking action to give everyone access to our services, benefits and accommodations.”

The legal career of Robert Pitman
Former U.S. Attorney Robert Lee Pitman was invested as federal judge for the Western District of Texas in San Antonio on April 17. He is the first openly gay federal district judge from Texas and one of 10 LGBT federal judges in the U.S.

In an interview with Out In SA, Pitman says he think barriers have come down for LGBT people in the legal professions. “Men and women who are judges, prosecutors or public servants of any type should be judged by the quality of their service and the commitment they have to their job,” he said.

The grit and determination Sandra Whitley
Thanks to the efforts of Whitley—a self-described survivor of a tough West Texas childhood—and her small but dedicated team, San Antonio is one of the few cities in the U.S. to offer shelter and support to homeless LGBTQ youth, who are often homeless precisely because they have been rejected or persecuted by family and peers. After a few early bumps with City regulations at its initial location, Thrive Youth Center opened its doors, 24/7, in February at Haven for Hope, the city’s homeless-services campus on the West Side of downtown. (Excerpt from essay, Most Influential 2015: Sandra Whitley)

Pogo Mochello Allen-Reese: Pole dancing mayoral wannabe
Proclaiming that, “San Antonio is one of the most obese cities in the country, so I can be a role model,” Pogo Mochello Allen-Reese, a former male stripper, threw his hat into the mayoral race. Allen-Reese, who hails from Louisiana, said if he won he would appoint Mr. Olympia Ronnie Coleman to be police chief and Ivy R. Taylor as city manager.

In the days following his announcement, Allen-Reese posted crudely edited images of mayoral candidate, State Sen. Leticia Van de Putte in which he called her a “big fat ho” and Mayor Hippo among other things.

Allen-Reese posted a photo of State Rep. Mike Villarreal, who also ran for mayor, along side a photo of Communist dictator Joseph Stalin, with a headline that read “Harvard heathen. Take a Hike Mike. Dunce. Born Loser.” On election day, Allen-Reese received 29 votes, coming in second to last ahead of Cynthia Brehm who got three votes.

Previtera heavily criticized former Councilman Bernal for his authorship of the city’s nondiscrimination ordinance which now includes LGBT protections. Just days after the endorsement from the governor, a group of Previtera supporters calling themselves Tejanos Against Politicos distributed a flyer to district voters that shows two men kissing and Bernal depicted as “El Diablo.”

The text of the flyer read: “Diego Bernal –  wants your children to be taught the homosexual lifestyle in your schools. Bernal, wrote the ordinance that allows men dressed like a woman to enter the woman’s bathrooms. He supports killing babies (abortion). He regularly voted for increases requested by CPS and SAWS. San Antonio is better than Diego Bernal. Democrat or Republican vote against Diego Bernal’s Views. Lets keep our great city decent.”

Mike Gallagher: This job takes a lotta time, ma’am
City Councilman Mike Gallagher’s opponent in this year’s municipal election says after seeing her two children, he warned her that serving on the city council is time consuming.

Celeste Montez Tidwell recalls meeting Gallagher. “I introduced my children to the councilman, my opponent. As he was shaking my hand he looked at my children and said, ‘You do realize that being on Council takes a whole lot of your time. Are you ready for that?’ My daughter’s jaw dropped. I responded, ‘Yes! Women have been multitasking for centuries.’ As I walked away with my children, my daughter Portland asked, “’Mommy, does the councilman think you’re dumb?’”

1) San Antonio celebrates marriage equality There was joyous celebration in the Alamo City on June 26, the day the...