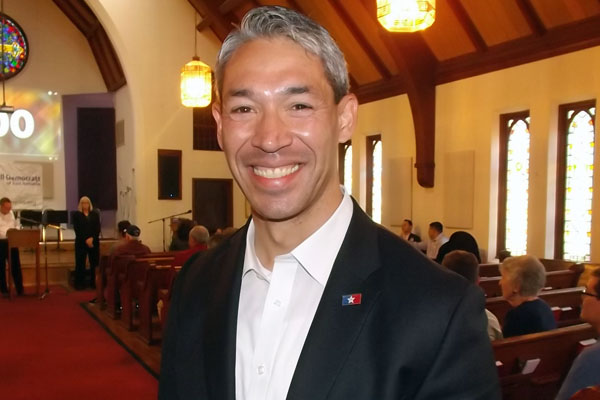 It’s been three years since San Antonio’s LGBT community has had an ally in the mayor’s office.

During her time in office, former Mayor Ivy R. Taylor did little to recognize the existence of her LGBT constituents, let alone support them. She called 2013’s non-discrimination ordinance — a measure that added protections for sexual orientation, gender identity and veteran status to the city code — a “waste of time,” didn’t mention the LGBT community once when she spoke at a vigil for the 2016 shooting at Orlando’s Pulse nightclub, and dodged all LGBT-organized candidate forums in her recent campaign for reelection. This feeling of erasure from the city’s LGBT community left her with the nickname “Poison Ivy.”

But Taylor didn’t return to city hall after the June 10 runoff election against former city councilman Ron Nirenberg, a loss some attributed to her stance on LGBT rights. To the LGBT community, the election of Mayor Nirenberg signals a reversal (or at least, acknowledgement) of LGBT issues at City Hall.

“I hope the LGBTQ community sees the election as a turning of the page,” Nirenberg told the Current on his first day in office last week. “There’s no relationship to repair here, I’m already an ally.”

The community seems to agree. Just a day into his new job, Nirenberg was selected to be a grand marshal of the city’s pride parade. While Taylor set a considerably low bar for Nirenberg to meet to improve the office’s relationship with San Antonio’s gay community, Nirenberg has promised significant changes to the way the city addresses LGBT issues. But now that he’s off the campaign trail, what will it really look like to have an LGBT ally back at the helm of City Council?

To the new mayor, it means leaving the city boundaries.

“We’re in an oasis in Bexar County…we have rational, accepting officials and community members. That’s not the case up in Austin,” Nirenberg told us. “We need to do what we can to support the threats coming from outside San Antonio.”

Nirenberg’s talking about the Texas Legislature, which just ended its considerably bumpy, five-month-long ride of partisan politics that shone a spotlight on LGBT discrimination. With 24 proposed bills to limit LGBT rights, Texas already leads the nation in the number of anti-LGBT bills proposed in 2017. The biggest, of course, is the so-called “bathroom bill,” a measure that would prohibit transgender people from using public bathrooms that align with their gender identity. While it didn’t make it to the governor’s desk by the end of session, we’ve yet to see the end of the debate. Gov. Greg Abbott has called for a July 18 special session for lawmakers to hash out leftover bills like this one.

And Nirenberg wants the city to pay attention.

“We must unite the community to prevent bad laws from being signed at the capitol during the special session,” he said. “Whether that’s individually testifying against a bill, local business outreach…whatever we have to do. Discriminatory legislation is bad legislation.”

Back in San Antonio, Nirenberg said, he’ll focus on improving the city’s 2-year-old Diversity and Inclusion Office, a department created after the 2013 passage of the non-discrimination ordinance.

“I want it to be a one-stop safe place for people to voice their concerns about discrimination in the community,” he said. At the moment, he added, it’s more of an “event-planning office.”

Unlike Taylor, Nirenberg voted in support of the non-discrimination ordinance, and at a mayoral forum on the campaign trail, Nirenberg said he wanted to extend its reach to the private sector. But to get to that point, he told us he’ll need the support of his brand new city council colleagues — which have only officially met once so far.

“The non-discrimination ordinance was meant to ensure no one in San Antonio was treated differently for their identity,” he said. “It’s time to fully see that out.”

Just hours before the Pride Bigger Than Texas Parade steps off on July 1, local LGBT activists plan to paint...