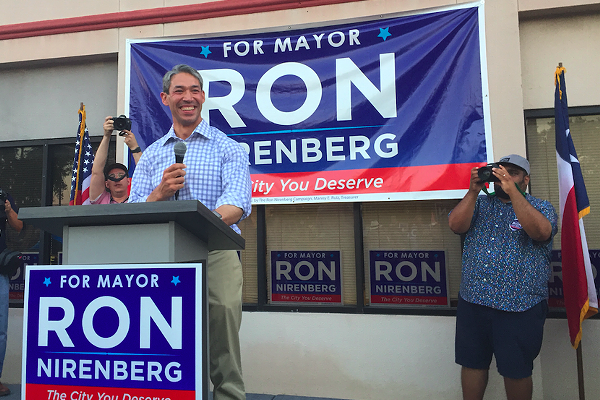 “Tonight the voters got it right,” Nirenberg told the crowd gathered at his election headquarters Saturday night. “Tonight the voters rejected the politics of division and false choices. They said yes to a bigger and mightier vision of inclusion and diversity.” With Nirenberg holding a steady lead throughout the night, Taylor conceded shortly after 9 p.m. — some two hours after polls closed. She first addressed the crowd gathered at Sunset Station with by praising God and reciting a Bible verse. “I am at peace,” she said. “I am so thankful to each and every person in this room.”

By 9:30 p.m., Nirenberg had received 54 percent of the votes to Taylor’s 45 — with 97,836 ballots counted. Former Mayor Julian Castro, his brother Congressman Joaquin Castro, and a gaggle of other local left-leaning politicians stopped by Nirenberg’s election night rally.

“Politics should be something that makes everyone feel included,” Julian Castro told the crowd shortly after 7:30 p.m. “So when the candidate wins, everyone wins and that’s how we feel tonight with Ron Nirenberg.”

Councilman Rey Saldana told the Current that the election’s results proved San Antonio “is a city that is progressive, a city that rewards candidates that step up on important and sometimes controversial issues.”

By Alexa Ura, The Texas Tribune June 6, 2017 Among the Elder family’s dinnertime conversations last year was nailing down...