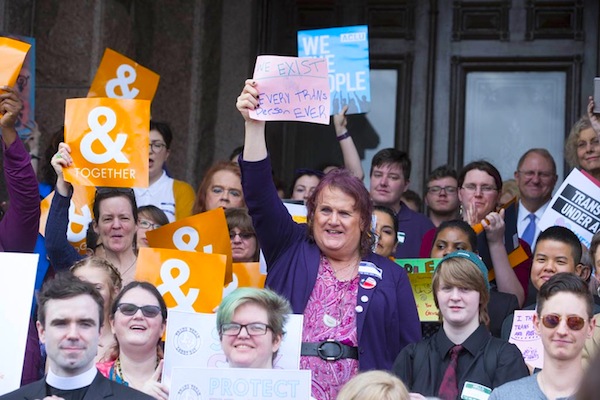 Supporters turn out for Trans Texan Lobby Day 2017 at the state Capitol on March 6, 2017. It was a busy day with several events both opposing and supporting SB6, the so-called "bathroom bill." (Photo: Bob Daemmrich for The Texas Tribune)

Among the Elder family’s dinnertime conversations last year was nailing down which sports their son Ben wanted to try out over the summer.

This summer, another conversation topic — whether their 11-year-old transgender son will lose the right to use the boys’ bathroom at school — could take up much more of their discussions. On Tuesday, Gov. Greg Abbott announced he was calling lawmakers back for legislative overtime in a special session beginning July 18 — and bathroom restrictions are on the agenda.

“My fear is that if the special session happens and some law passes, that’s going to take the decision out of their hands,” said Ann Elder, who has spent the past year meeting with school administrators to make sure Ben’s accommodations are set up when he starts middle school in the fall.

District officials and Ben’s elementary school teachers and counselors have worked with the Elder family throughout his transition by calling him by whatever name he wanted and treating him like “he wanted to be treated,” Ann says. They first allowed him to use a bathroom in the nurse’s office but then signed off on letting him use the boys’ bathroom when Ann Elder realized he had been holding it in for the entire school day.

With Ben moving on to the sixth grade, Ann Elder was relieved to find that his middle school was “beyond supportive,” and she got a temporary reprieve from concerns that the Legislature would get in the way of that when efforts to regulate which bathrooms transgender Texans can use fizzled out amid a legislative stalemate at the end of their regular session.

It’s unclear whether any bathroom regulations will make it out of a special session, where lawmakers have a much shorter window to send proposals to the governor’s desk. But the governor’s decision to extend a divisive, months-long debate on the issue and give lawmakers a second chance to pass a “bathroom bill” has pushed a dark cloud of uncertainty back over transgender Texans and their families.

“That’s going to put [school officials] in a really awkward situation because they’re going to have to enforce this even if they don’t want to,” Ann Elder said in a recent interview. “And then it’s going to force Ben and I to figure out how we’re going to handle it or do we just exit the public school system.”

Abbott’s special session announcement and the inclusion of bathroom restrictions comes after months of legislative bickering and an unprecedented show of force at the Capitol by transgender Texans and their allies.

The controversial bathroom proposals easily dominated the legislative session: Folks on both sides of the issue gathered at the Capitol for protests, lobbying days and rallies on the issue. Lawmakers held two overnight hearings during which transgender Texans and their families pleaded with them to not pull back established protections against discrimination and accommodations they’ve obtained. And the proposals even led to Republican infighting — including two sets of dueling press conferences — about legislative inaction.

All of that is likely to pick back up in July for round two.

“The main concern is our schools and making sure that privacy is protected in those arenas,” Simmons said.

A spokesman for state Sen. Lois Kolkhorst, R-Brenham, who authored the Senate’s more restrictive measure, Senate Bill 6, did not respond to a request for comment on whether she would file a bill with similar language.

Both measures died in the House under Speaker Joe Straus, who has made clear he opposes bathroom restrictions and offered up a watered-down compromise that some groups said would’ve likely allowed school officials to continue allowing transgender students to use bathrooms that match their gender identity. That put Straus in direct opposition to Lt. Gov. Dan Patrick — who contends the measure is needed to improve privacy — and the Senate, which refused to accept anything less than a restrictive, broad measure that would eliminate trans-inclusive bathroom policies.

The impasse could carry over into the special session that Patrick forced Abbott into calling by holding hostage crucial legislation needed to continue some state agencies.

On Tuesday, Abbott said the sunset legislation was used for “political fodder” but still added bathroom restrictions to the list of things he expected lawmakers to address during the 30-day special session.

He also reiterated his support for HB 2899, endorsing it as a way to “establish a single statewide rule protecting the privacy of women and children,” but he indicated he’d settle for restrictions focused on public schools.

“At a minimum, we need a law that protects the privacy of our children in our public schools” Abbott said.

A united front of opposition

After largely staying out of the bathroom debate, Abbott echoed social conservatives who for months have used privacy as the main argument for why bathroom restrictions are necessary. Though they’ve provided virtually no evidence, they’ve claimed that trans-inclusive bathroom policies allow individuals to enter bathrooms of the opposite gender for nefarious reasons.

That’s been met by loud opposition from LGBT advocates, civil rights groups, school groups, business groups and major corporations who offered a mostly united front during the legislative session in labeling the proposals as discriminatory and hurtful to an already vulnerable population.

The debate has also helped galvanize a community of Texans that until recently largely stayed out of the political arena but are now showing no signs of retreating during the special session.

Two years ago, about 80 people traveled to Austin to visit with lawmakers as part of Texas Trans Lobby Day, according to organizers. This year, almost 400 people — including transgender adults and children — traversed the halls of the Capitol as part of their lobbying efforts against bathroom restrictions and other legislation they deemed harmful to transgender Texans.

“I never thought I’d see that many people show up in Texas on a topic specifically related to trans people,” Lou Weaver, transgender programs coordinator for Equality Texas, said of the hundreds of individuals who packed the Capitol for the first committee hearing on the Senate bathroom bill. “It continued to happen over and over again … These people are continuing to show up.”

Among them will be the parents of transgender children who expressed mixed feelings of relief, gratitude and frustration after the regular session ended without passage of a “bathroom bill.”

“To be very honest with you, this legislative session has been really hard for me,” Ann Elder said after the Legislature adjourned. “I just feel like I’m fighting a losing battle, and I don’t think anybody cares other than the other families. I’m feeling very bleak about the situation.”

Others are using the defeat of the proposals during the regular session to rejoice and regroup on their efforts to fight similar efforts by continuing to personalize the issue.

“We’re regular families. I drive a minivan and listen to country music. My husband is the president of our church. We’re just like you,” said Amber Briggle, the mother of transgender fourth grader named Max. “I think we’ve made it relatable, and more and more transgender Texans like my son are standing up and speaking up, and it shifts your understanding of what it means to be transgender when it’s someone you know, when it’s so personal … I think that made a difference.”

The San Antonio Public Library announced a list of events it is sponsoring in observance of Pride Month. This is...