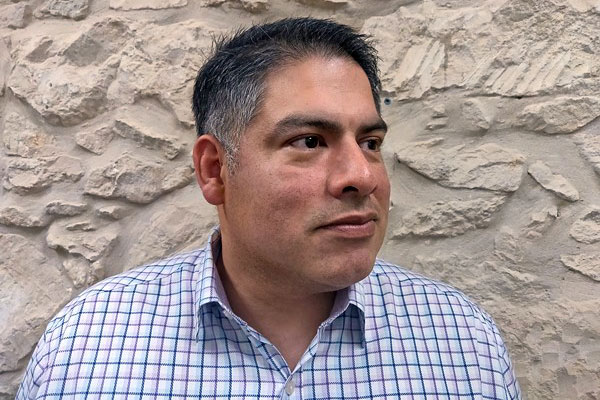 Councilman Manny Pelaez seems a little caught off guard when I ask him about his decade-long experience as an improv troupe member and stand-up comedian. Still, he takes the question in stride.

“Who told you that?” he asks. When I reveal my source, he nods in a circumspect manner, then fesses up. “I was … a stand-up comedian.”

From the sleek second floor of the Plaza de Armas building, the 45-year-old labor and employment lawyer explains that comedy helped satiate his appetite for performance and public speaking, a hankering that’s apparent to anyone who’s observed Pelaez’s time on the dais.

“The most beautiful thing about improv and stand-up comedy is that you can say the craziest, most outrageous things and you’re inoculated, in many ways, from criticism … [released from] the social contract that we all have to only say polite things,” he says. “The day you start taking yourself too seriously is the day that you’ve abandoned honesty.”

Though Pelaez took his 2017 bid to represent District 8 quite seriously, he was, at the time, convinced that any one of his five opponents would prevail. Instead, he was catapulted into a runoff with Cynthia Brehm, current chairwoman of the Bexar County Republican Party.

At the mention of his former opponent’s name, the room’s light mood evaporates and Pelaez takes a long pause.

“That lady is a piece of work,” he says with a slow shake of his head, explaining that he was “disappointed” the race ended up in a runoff. “[Brehm] is very antagonistic … really on the verge of … demagoguery. Negativity was her platform. [She has a] very, very strange way of looking at public policy.”

Pelaez said he feels sad for the BCRP. “They really could have gotten some real leadership there. But, thank God I beat her, and thank God we were able to bring some optimism and positivity to the office.”

Election season, for office holders, is report card time. So, I ask if there’s anything Pelaez thinks Mayor Ron Nirenberg could improve upon as he undertakes his own reelection campaign.

Pelaez leans back in his chair and contemplates.

“Sometimes,” he says, “I wish our mayor would punch back.” He reminds me that many people in the world “make a hobby out of taking swipes at leaders.”

“I worry that Ron showed up with great arguments to a knife fight,” Pelaez adds.

He says he’s encouraged Nirenberg to occasionally “punch back.” And he’s sometimes seen the mayor jump into the ring.

“I always celebrate when he does that,” Pelaez says. “I’m hungry to see Ron do that a little bit more,” he says of the upcoming election. “I love watching [him] flex those muscles, as well.”

Earlier this month, outspoken District 6 Councilman Greg Brockhouse announced his run to unseat Nirenberg. I’m curious whether Pelaez has learned any new campaign moves from Brockhouse, who described himself as a “driven dude” in this column.

“I’ve learned that San Antonio is hungry for plain speaking, and I’ve seen that he has a very good instinct for tapping into that hunger.” Pelaez nods thoughtfully. “He’s a master at that. I’ve learned that being a naysayer and positioning yourself as the outsider — even though you’re quite inside — works and it gets attention. He’s indefatigable, and there’s no denying that he’s a workhorse. And one of the other things that I’ve learned from him is that he gives as good as he gets. Greg and I have exchanged body shots.”

Pelaez suddenly stops, squints and thinks. “Not body shots.” He turns to Pat Wallace, his chief of staff. “What is it?” He lightly roundhouses in front of his chest. “The punches…”

“No, that’s weird. A body shot is when you drink liquor out of someone’s belly button, isn’t it?” Pelaez’s eyes light up. “Body blows. He and I have exchanged body blows … a number of times, and we’re still friends.”

Pelaez continues. “I consider him my friend. We just have strong disagreements about the direction in which the city needs to go.”

I ask Pelaez what keeps him optimistic and on track when things get heated on the dais.

Though he’s only in his first term, Pelaez speaks like a man who’s been in office for a long time.

“The alternative to smiling is crying,” he says with a bold and winning smile. “And I’m not gonna waste any time crying.”

I’ll drink to that.

The Stonewall Democrats of San Antonio announced their candidate forum and endorsement meeting will take place on Sunday, March 10...