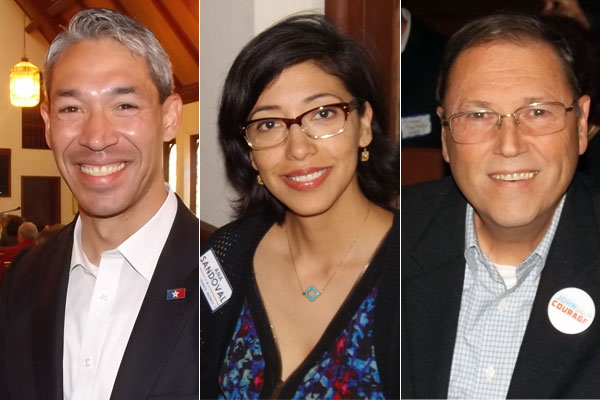 Among the incumbents running for reelection in the May 4 municipal election are Mayor Ron Nirenberg, District 7 City Councilwoman Ana Sandoval and District 9 City Councilman John Courage. (Photos by Sam Sanchez)

The Stonewall Democrats of San Antonio announced their candidate forum and endorsement meeting will take place on Sunday, March 10 in the La Havana Room at the El Tropicano Hotel.

The purpose of the forum is to hear from candidates who are running for City Council and to vote on endorsements. The meeting is being held ahead of the municipal election which is slated for Saturday, May 4.

There are a total of 57 candidates running in the 11 races for mayor and city council.

According to Stonewall co-chair, Chris Forbrich, 33 of those candidates, including Mayor Ron Nirenberg, have said they will attend the forum to seek the group’s endorsement.

Stonewall sent invitations to all the candidates running for City Council. To be eligible for an endorsement, candidates must fill out a questionnaire and appear at the forum to make a short presentation and answer questions from Stonewall members.

While guests are welcome to attend the forum and hear candidates, only members may stay for the endorsement meeting.

The municipal election is on Saturday, May 4. Early voting begins on April 22 and ends on April 30.

Stonewall Democrats of San Antonio Candidate Endorsement Forum, Sunday, March 10 at 1 p.m. in the La Havana Room at the El Tropicano Hotel. The restaurant adjacent to the meeting room is offering a luncheon special at noon for those attending the forum.

Following is a complete list of candidates for Mayor and City Council.

Originally published in the San Antonio Current. With an origin story not unlike that of fellow Puerto Rican drag star...