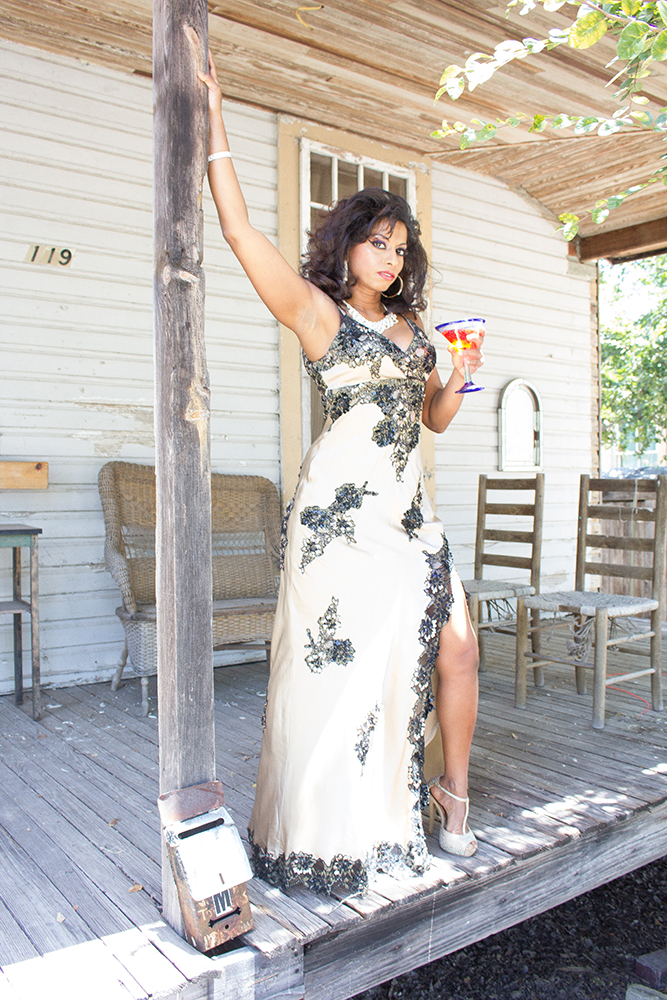 Being openly sensual with my body and my art can be challenging to some on both sides of the line, but always joyful and powerful to me.

If you follow S.T. Shimi on social media, you know she is an extraordinary creature who has a mind for politics, a body for fitness competition, and a palate for fine dining. Those lucky enough to call her family know she is also a survivor, a dedicated activist, an educator, and the type of person who would give you the glitter off her skin if you needed it. You may have seen her walking down South Alamo to teach an art class, or watched her onstage performing with Stars and Garters Burlesque as her alter ego, Miss Black Orchid. However you have come to discover Shimi, it is safe to say she is unlike anyone else you know.

A native of Singapore, Shimi attended Dartmouth College in New Hampshire, seeking an experience as different as possible from the world she’d grown up in. “A professor semi-seriously challenged me to not be one of those leftist activists who stayed on campus after graduation,” Shimi recalls. This push led her to a blossoming nonprofit institution in San Antonio called Jump-Start Performance Co., where she met like-minded artists who became her new chosen family. There she began a long and successful career as an arts administrator, educator, and performance artist. In her early solo work, S.T. Shimi created multimedia pieces that combined her love for the written word and movement. “These pieces focused on the exploration of some interesting, complicated, and immediate intersections of my identity,” Shimi says: The politics of being foreign (Tourist Trap, 1999); race, gender, and sexuality (Lost in Translation, 2000); atheism, Asian culture, freethinker-history and controversy in the Hill Country (Southern Discomfort, 2001).

The queer feminist activist would end up staying in San Antonio for 21 years, creating a home with local visual artist Oscar Alvarado and a family of rescued fur babies. Their two-story home in the Lavaca Neighborhood has been the center for creation, dance rehearsals, and late-night dinner parties enjoyed by an eclectic list of artists from around the world. She’s affectionately known as “Miss Shimi” to the King William neighborhood children who attended Bonham Academy, where she taught for several years. The heat, humidity, and pervasive religion of South Texas are not so different from her homeland, and the path she is currently on is also similar to that of her parents: Her mother is an administrator and her father is an educator. When Shimi’s grandmother became a widow, her mother was pressured to leave high school and go to work with the Public Utilities Board; grandmother garnished mom’s salary. Shimi holds on to one beautiful item her mother purchased with her first paycheck, a vintage green sari with Spanish lace. “That is the only thing she really bought herself with that paycheck because her co-worker told her it was important to have something that was hers,” Shimi recalls. “She then completed the equivalent of the GED on her own, with her coworkers making fun of her for trying to be above herself. If all that hadn’t happened, my mother would have become a teacher.”

Shimi’s father is a career educator and discipline master. “In Singapore, corporal punishment in school was okay up until I left to college. If you were naughty you could get called up in assembly and get whacks on the hand with a cane,” Shimi says. “There are still grown men today who come up to my father and say, ‘Hello, Sir, I’ve got a good job now and a family!’”

Her wild difference has always been a point of conflict for Shimi and her highly conservative parents, who still live in her childhood apartment in a high-rise building on Singapore’s east coast. “Even now, there, this feeling that I’m not successful enough … there are still things that baffle them,” Shimi says. “They are still very confused about the theater, and for a long time my father was telling people that I was writing for a newspaper in Boston. He said that’s easier to understand.”

In the Spring of 2014 Shimi was laid off from her staff position as well as most of her work with the education program at Jump-Start. She had already been exploring new territory, working as a fitness trainer since 2011. Her love for aerial dance—which requires great strength to perform acrobatics on long pieces of lycra suspended 20 feet in the air—brought her to the art of pole dance. She found her new home as a student and later an instructor with the local, women-centered studio Soft Sensuous Moves. “At first I was a bit unsure about so much pink and so much goddess talk,” Shimi says. “But I really loved my instructor, Jennifer Huff, who has become a great mentor to me, and I was really struck by how tight-knit the studio was despite our great diversity.” Pole dance has given Shimi an outlet to overcome her fear of heights, while getting a rush of affirmation for being strong and athletic in a way she had not envisioned herself before. Surrounded by women like Huff and owner Rene Mulholland, Shimi has a welcoming environment where she is encouraged to push herself as a competitor and performer. “Every movement style I’ve explored has taken me closer to touching what I think of as that ‘third rail’ of living life as a feminist artist of color: where being openly sensual with my body and my art can be challenging and possibly upsetting to some on both sides of the line, but always joyful and powerful to me,” Shimi says.

Southtown, where Shimi has lived for more than two decades, is rapidly changing yet again. “It’s an interesting situation to know that much of the groundwork that we did … the original First Friday art walks, supporting Bonham Academy’s amazing growth, contributing to an underappreciated local scene of collaboration across genres, is what now makes Southtown so appealing to the food and beverage industry, house-flippers, and builders of fancy lofts,” Shimi says. “It’s bittersweet because I sometimes do think that that history is being underappreciated and ridden over, and those who thought we were gentrifiers might now be amused to see that many of us are in danger of being pushed out of the neighborhoods we call home.”

But the future is glittery and bright for S.T. Shimi as a performer and educator. “I’m feeling the need to go back to school!” she says. “In the meantime, I continue to build and perform short pieces through burlesque and pole, and when all my metaphors and thoughts gel, I know there’ll be another theater performance piece soon.”