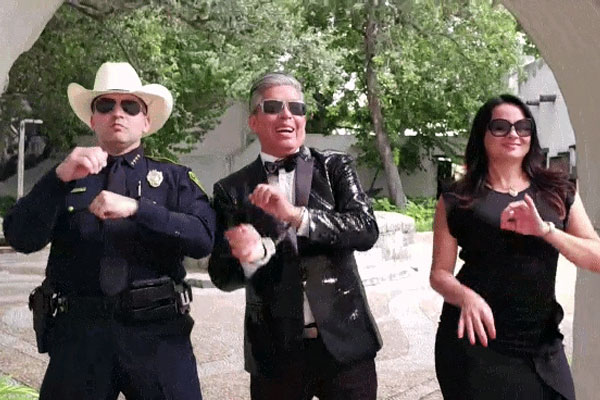 San Antonio Express-News journalist Michael Quintanilla (in handcuffs) boogies with Sheriff Javier Salazar and his wife Sarah in a video which will be screened as part of the annual Society of Professional Journalists' Gridiron show on September 30. See Quintanilla's video from last year's show at bottom of page (Video capture via Facebook)

Local journalists who are members of the Society of Professional Journalists are busy polishing their stage skills ahead of the group’s annual Gridiron fundraiser and comic review which is slated for September 30 at the Texas A&M San Antonio Auditorium. The name of this year’s show is Make Gridiron Great Again.

The Gridiron shows combine skits, songs and dance parodies which spoof local news makers and the journalists who cover them. The format of the show could easily be compared to the campy hijinks of Fiesta Cornyation but perhaps with fewer sequins. The concept for the show was originated in 1985 by Gebe Martinez who at the time was a reporter for the now-defunct San Antonio Light newspaper.

Like Cornyation, Gridiron has developed its own reputation for skewering satire. During every show, the Most-Panned Award (actually a cast-iron frying pan) “is given to a local news maker who has garnered the most negative media coverage in the past year, as voted upon by the cast.” Cast and crew of the 2016 Gridiron show. (Photo via Facebook)

The cast of Gridiron is drawn from local print publications, radio and television stations, and a few public relations professionals are thrown in for good measure. According to the Gridiron Facebook page, “All of the material – skits, songs and videos — is originally written by local journalists who remain anonymous so they may remain employed.”

Proceeds from Gridiron go to help support local students majoring in journalism and communications. Last year, 13 students received a total $14,000 at a banquet held in June.

The Society of Professional Journalists San Antonio Chapter presents “Make Gridiron Great Again,” Saturday, September 30, 2017 at 7:30 p.m. at the Texas A&M University Auditorium, One University Way. Tickets $35 early bird. $40 after September 23. Students with college IDs may buy tickets for $20 at the box office the night of the show only or for $10 to the dress rehearsal from 7:30–9:45 Friday, Sept. 29. Purchase tickets at this link.

One of President Donald Trump's nominees for a federal judgeship in Texas is a notorious homophobe who supports conversion therapy,...