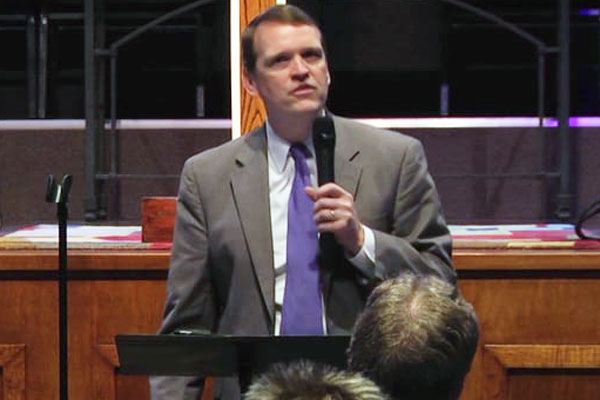 One of President Donald Trump’s nominees for a federal judgeship in Texas is a notorious homophobe who supports conversion therapy, says marriage equality will lead to polygamy and bestiality, and maintains that trans kids are evidence of “Satan’s plan.”

Jeff Mateer currently serves as the first assistant attorney general of Texas, a position he has held since being hired by Attorney General Ken Paxton in March 2016. Pending confirmation, Mateer will serve on the US District Court for the Eastern District of Texas.

Prior to working in the attorney general’s office, Mateer spent six years as general counsel for the First Liberty Institute where he specialized in disputes over religious liberty.

Equality Texas said in a statement that the First Liberty Institute uses “anti-LGBTQ policies to blatantly vilify our families and neighbors . . . By nominating associates of this hate group, the president is using his office in an attempt to ensure policies will be created and spearheaded to advance anti-LGBTQ discrimination.”

In 2012, First Liberty Institute under Mateer sued a high school in East Texas for prohibiting cheerleaders from carrying banners with bible verses during football games. The group also threatened to sue the City of Plano because their updated nondiscrimination ordinance included LGBT protections.

In a 2015 speech, Mateer spoke disparagingly about the 2013 case of Coy Mathis, a trans girl and first-grader from Colorado who won a lawsuit permitting her to use the girls’ restroom at her school.

“Now, I submit to you, a parent of three children who are now young adults, a first grader really knows what their sexual identity? I mean it just really shows you how Satan’s plan is working and the destruction that’s going on,” Mateer said.

Later in that same speech, Mateer derided the concept of marriage equality, saying it would lead to outrageous marital arrangements.

“Why couldn’t four people wanna get married? Why not one man and three women? Or three women and one man?” Mateer said sarcastically. “Somebody wanted to marry a tree. People marrying their pets. It’s just like — you know, you read the New Testament and you read about all the things and you think, ‘Oh, that’s not going on in our community.’ Oh yes it is. We’re back to that time where debauchery rules.”

Before he joined the attorney general’s staff, Mateer wrote an opinion piece in the Dallas Morning News in which he defended state employees who would not issue marriage licenses to same sex couples after the Supreme Court’s landmark ruling.

“The pursuit of same-sex marriage through the courts rather than the democratic processes has trampled or corrupted virtually every tenet of the rule of law,” Mateer wrote.

26th Annual Run and Walk for AIDS Set for September 23

Launched in 1991 and now established as the city’s most significant HIV/AIDS fundraiser, the Run and Walk for AIDS celebrates the lives...