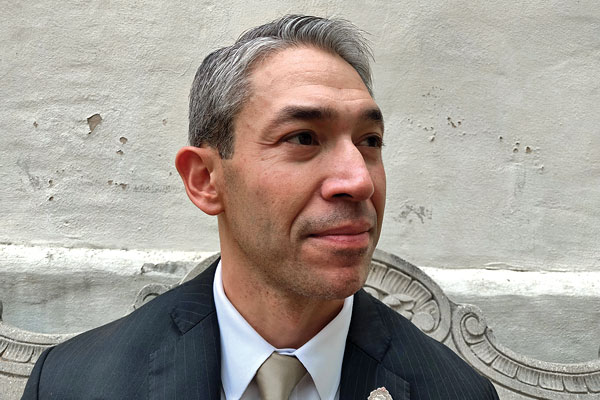 On a quiet Tuesday afternoon, San Antonio Mayor Ron Nirenberg is sitting alone at a window table at Tito’s Restaurant in Southtown, typing into his phone.

As I walk toward him, I muse on the time our paths crossed in 2013. We were both guests on Chris Duel’s Internet show Talk Now SA, and Nirenberg was running for the District 8 council seat. Nirenberg’s wife, Erika Prosper, was also in the studio. Her vibrant, energetic support of her husband’s political aspirations still echoes in my mind.

Now, Nirenberg — who turns 42 on April 11 — is campaigning for a second mayoral term against an unusually formidable opponent, District 6 Councilman Greg Brockhouse.

As my first-time interview with Nirenberg unfolds, he shares his vision of San Antonio becoming one of the world’s great cities by the end of the century. Key to that ambition are the proactive efforts he’s leading to build a modern transportation system, create affordable housing and address climate change. Tempesting above all this, however, is the present business of staying in power.

It was only two years ago that Nirenberg defeated then-incumbent mayor Ivy Taylor in a runoff election. Since then, he’s molded a political brand as an international ambassador.

And it’s perhaps this globalist sensibility that galls his detractors, who have slapped him with labels like “liberal” and “progressive,” terms weaponized under Donald J. Trump’s nationalist administration. Nirenberg, however, maintains that he isn’t affiliated with any political party.

As an advocate of “equity and progress,” Nirenberg finds it unfortunate that some consider human rights a progressive issue. The mayor holds to the biblical philosophy of “I am my brother’s keeper” and says he considers human rights one of his “non-negotiables.”

In his characteristically calm manner, he takes a drink of his Topo Chico and shares advice about health, exercise and eating in moderation.

“I’m a firm believer in a mind-body-spirit balance,” says Nirenberg, who was recently voted one of the Top Ten Fittest Mayors in America by the blog Health Fitness Revolution.

I ask if his eclectic background — he was born in Boston, raised in a multicultural Austin household and comes from an interfaith family — helps him in his mayoral role.

“I think it absolutely does,” Nirenberg says, speaking in low, rhythmically measured tones. “It’s helpful to have perspectives that go beyond just one experience of life.”

He adds that his world view is driven by a desire to lead with compassion.

“In order for us to live a healthier life in a more peaceful world, it requires all of us to understand people who don’t look like us, don’t believe like us, don’t come from the same experience as us,” he says. “That’s why I’ve always been led by a motto of ‘be a better neighbor.’ I have an abiding belief that the more people get out of their comfort zone, walk across the street, know their neighbors, the more we will begin to understand that there are many different challenges that people have.”

I inquire how he explains what he does to his son, Jonah.

“Jonah often explains it to me,” he says. “Every time I’d come home from work as a city councilman, he’d ask me, `Did you make the world better?’ It’s wonderful to hear that, because that’s the best performance review anyone can give an elected official.”

When I ask Nirenberg if that’s a metaphor he replies, “No, it’s quite literal. You’re gonna laugh. So, it took me a little while to convince Erika to date me, but what hooked her [was] when she came over to my apartment after dinner, and she inspected my bathroom.” Because his mother always told him to keep up with this particular household chore, Prosper found the area spotless.

“The rest is history, I guess.”

I ask the mayor what he feels he’s learned about politics from Brockhouse, and for a moment, he gives no answer.

“Greg who?” he finally asks.

After a pause, I tell him what District 8 Councilman Manny Pelaez recently told me: “Sometimes, I wish our mayor would punch back. I worry that Ron showed up with great arguments to a knife fight.”

“Well, the proof is in the pudding, right?” Nirenberg replies. “My job as mayor is not to pummel people, but to build consensus and continue to unify the vision of the city to move our community forward in some significant ways.”

He looks at his drink thoughtfully.

“There’s a lost art of compromise and consensus building in politics,” he says. It’s about who has the most people on their side, when it should be about let’s get the community together and unify our vision for the future.” Nirenberg cites former mayor Julián Castro’s SA2020 plan as the kind of success that can be achieved through building consensus.

During his time in office, he’s learned that with progress comes friction.

“I don’t fear conflict,” he says. “Through conflict is how you build resolve and how you accomplish great things.”

Several weeks later, I’m photographing Nirenberg at the Spanish Governor’s Palace. He tells me he’d been thinking about my question regarding the political lessons he’s gleaned from Brockhouse.

“I’ve learned that the truth doesn’t matter,” he says introspectively.

In the world of politics, punching last may very well be the other golden rule.

Originally published in the San Antonio Current. After slaying her way into the top eight of last year’s American Idol,...